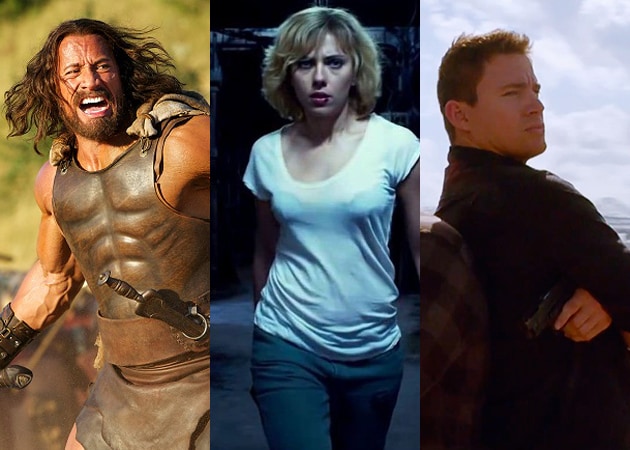 It's a Hollywood Friday at the Indian Box office with the movies Hercules, Lucy and 22 Jump Street set for release.

It's a Hollywood Friday at the Indian Box office with the movies Hercules, Lucy and 22 Jump Street set for release. With no Bollywood releases arriving in theatres (some may say they have been Kicked back) till next weekend, this weekend looks like a three way battle between the three English films. (Also Read: Movie Review: Hercules)
First up for release is the latest action -adventure-fantasy film Hercules starring Dwayne 'The Rock' Johnson. The actor, who was the most successful at the box office in Hollywood last year is already a huge phenomenon in India. The plot revolves around Hercules, the demi godson of Zeus who is tricked by goddess who drives him insane forcing him to murder his own wife. He then starts living as a tormented mortal who embarks on a quest when the King of Thrace and his daughter seek his aid in defeating a tyrannical warlord.
Next up is Lucy. The film, a sci-fi superhero movie with a female protagonist, features Scarlett Johansson in the title role. The film, which also stars Morgan Freeman, has outshone all other releases at the US box office last week and has generated positive reviews all over. The story revolves around a woman (played by Scarlett Johansson) who transforms into a merciless warrior evolved beyond human logic after a bag of drugs is accidentally released into her system. (Also Read: Movie Review: Lucy)
Finally, we have the sequel to 2010's comedy film 21 Jump Street, aptly titled 22 Jump Street starring Channing Tatum and Jonah Hill. The plot revolves around the adventures of two cops Schmidt and Jenko when they go deep undercover at a local college. (Also Read: Movie Review: 22 Jump Street)