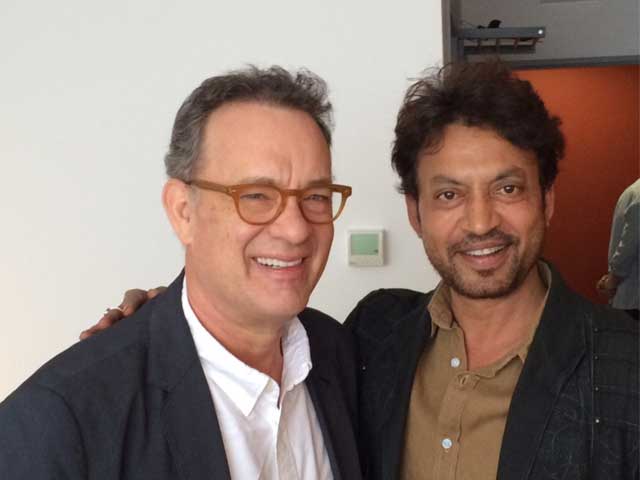 "This will be most pleasant movie to make, I think, provided you and I have a few more scenes together! If not, we will just have to save the world as is!," Tom Hanks wrote to Irrfan in a message

After entertaining Indian audiences with Piku, Irrfan Khan has landed in Budapest to shoot for the Hollywood film Inferno. Hollywood star Tom Hanks welcomed him with a special request - he wants to shoot more scenes with the Indian actor.
Irrfan, who arrived in Budapest on Monday, will soon start shooting for Inferno. In a personalised gesture, Tom Hanks jotted down a message for Irrfan on a postcard with his signature.
The message read: "This will be most pleasant movie to make, I think, provided you and I have a few more scenes together! If not, we will just have to save the world as is!.
Inferno is the third film in the franchise that launched with The Da Vinci Code in 2006 and continued with Angels & Demons in 2009. The film, which is an adaptation of Dan Brown's eponymous novel, will witness Ron Howard returning to the director's chair, and Mr Hanks will play the lead character Robert Langdon.
In this latest instalment, Robert finds himself in a hospital room in Venice as well as the target of a manhunt. With the help of Sienna, a nurse, and his knowledge of symbology, he will try to escape while they have to solve the most intricate riddle Robert has ever faced.
Irrfan will portray Provost, the head of a shadowy group that becomes involved with Robert, while Mr Sy will play the leader of a disease prevention team.
The film is scheduled to hit theatres on October 14, 2016.