Priyanka Chopra is in Miami to promote Baywatch and amidst her professional duties, the actress decided to chill on the sun-kissed beach 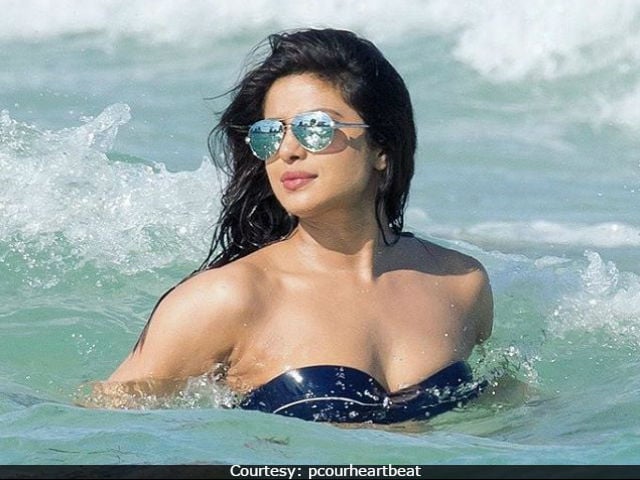 Priyanka Chopra is in Miami to promote her maiden Hollywood film Baywatch and amidst her professional duties, the actress decided to chill with friend, model Adriana Lima on the sun-kissed beach of Miami. Fan clubs shared pictures of Priyanka enjoying the sun and the sand with Adriana in their stylish bikinis. Priyanka looks super glamourous in a navy blue bikini which she paired with a thigh-length khaki shirt and shades while Adriana, who also features in Baywatch, opted for a black halter bikini. The red lipstick, hoop earrings and cat eye sunglasses added to her style quotient. Baywatch releases on May 25 and hits Indian theatres on June 2.
In many pictures, Priyanka is seen enjoying a ride on Adriana's back. But, where Priyanka whips her hair in the water is Internet's favourite.
Here are some pictures of Priyanka on beaches of Miami.

Priyanka, why so stunning?
Yesterday, she shared some pictures from Baywatch promotion diaries. Here they are.

The Dostana actress returned to India few weeks ago. Priyanka also stars in the television show Quantico, which is in its second season.
Priyanka Chopra, 34, stars as antagonist Victoria Leeds opposite Mitch Buchannon, played by Dwayne 'The Rock' Johnson. Baywatch also stars Zac Efron as Matt Brody and actress Kelly Rohrbach as CJ Parker. It is based on popular television series of the Nineties of the same name, which was headlined by David Hasselhoff and Pamela Anderson.
Priyanka's debut Marathi film, as a producer, Ventilator, recently won three National Awards.