Which Fast 8 Co-Star Has Made Dwayne Johnson so Furious?

"This is my final week of shooting #FastAndFurious8. There's no other franchise that gets my blood boiling more than this one. An incredible hard working crew," and Dwayne 'The Rock' Johnson wrote on Instagram 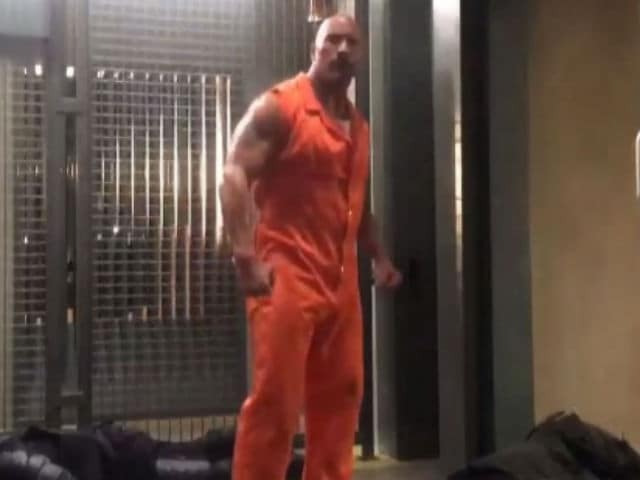 A still from the video shared by therock on Instagram.

When they butted their chests in Fast Five, Vin Diesel and Dwayne 'The Rock' Johnson - or rather their onscreen characters almost ended up taking out half of Rio.
So it could be time for Hollywood to batten down the hatches, because the film industry's musclemen appeared to have beef in real life.
It all started when Dwayne Johnson, 44, posted an emotional rant on Monday on Facebook and Instagram, referring to some of his male co-stars on the shoot of Fast and Furious 8 as "candy asses."

This is my final week of shooting #FastAndFurious8. There's no other franchise that gets my blood boiling more than this one. An incredible hard working crew. UNIVERSAL has been great partners as well. My female co-stars are always amazing and I love 'em. My male co-stars however are a different story. Some conduct themselves as stand up men and true professionals, while others don't. The ones that don't are too chicken shit to do anything about it anyway. Candy asses. When you watch this movie next April and it seems like I'm not acting in some of these scenes and my blood is legit boiling - you're right. Bottom line is it'll play great for the movie and fits this Hobbs character that's embedded in my DNA extremely well. The producer in me is happy about this part. Final week on FAST 8 and I'll finish strong. #IcemanCometh #F8 #ZeroToleranceForCandyAsses

Mr Johnson didn't name anybody or say what was riling him, while Vin Diesel, Jason Statham, Scott Eastwood and rapper Ludacris have refrained from responding.
But TMZ citing unnamed "production sources" -- reported that Vin Diesel was the target of the tirade, and that the pair had a secret meeting on set in Atlanta Tuesday to "hash things out."
"We're told The Rock has butted heads with Vin Diesel during the production, in part because VD is a producer and has made decisions that didn't sit well with the former wrestling champ," TMZ said.
Meanwhile an insider was quoted by E! Online as saying that filming "wasn't easy for anyone" and had been especially difficult for Dwayne Johnson, who is also a producer of the movie, which finishes filming in a week.
(Except for the headline, this story has not been edited by NDTV staff and is published from a syndicated feed.)