Will Shah Rukh Make a Dubsmash Video With William, Kate? Find Out Here

During the interview, the public relations team of Fan said that they suggested Shah Rukh to do a dubsmash with them on the song Jabra Fan. The Happy New Year star replied, "They will never allow it" 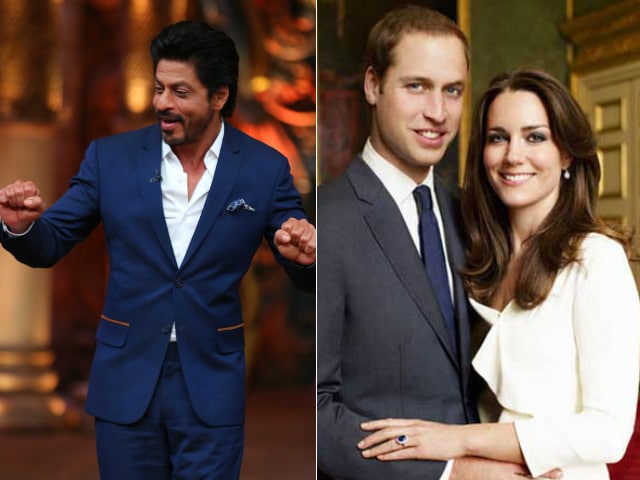 File photos of Shah Rukh Khan, and William and Kate.

Actor Shah Rukh Khan said that it's a great honour for him to introduce Britain's Royal couple Prince William and Kate Middleton.
They are arriving on their first visit to India on Sunday, April 10.
They Royal couple will be given a Bollywood-style reception on their arrival in the city which will be attended by film stars including SRK, Aamir Khan, Aishwarya Rai-Bachchan, Rishi Kapoor, Hrithik Roshan, Farhan Akhtar and cricket legend Sachin Tendulkar, according to the British High Commission. (Also Read: In India, William and Kate Will be Welcomed by Shah Rukh, Aishwarya)
"There will be lot of actors and friends so it will be fun. I think it's a big honour to be there and introduce them and be nice. We will decide if they want to see the film (Fan) or not. In England they still watch our films. So hopefully let's see," Shah Rukh, 50, told PTI when asked if he is planning a special screening of Fan for the royal couple.
During the interview, the public relations team of Fan said that they suggested Shah Rukh to do a dubsmash with them on the song Jabra Fan.
The Happy New Year star replied, "They will never allow it."
"I am told there is a decorum and I said Ok tell me what to do. It shouldn't be like they don't let my kids to study in London," the Dilwale actor joked.
Apart from introducing the royal couple, another important task Shah Rukh has tomorrow, is to support his IPL team Kolkata Knight Riders, who have a match against Delhi Daredevils.
"I have my match (tomorrow). I want to watch it (and) I want to go to Kolkata. But it doesn't take away from the fact that it is important that I introduce Prince Williams and his wife Kate. I just introduce them. I am not performing for them. Nobody is performing," Shah Rukh added.
Directed by Maneesh Sharma, Fan starring SRK in a double role and Walusha De Sousa is slated to release on April 15.