It is an ill-advised, rough-hewn sequel to AB Tak Chhappan 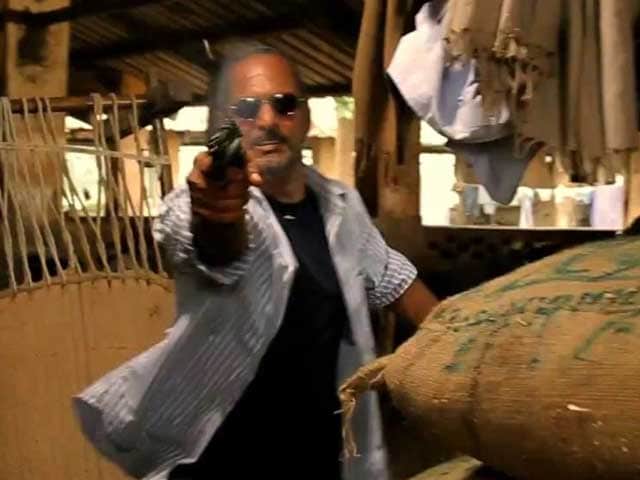 A countdown to a disaster from the moment it kicks off, Ab Tak Chhappan 2 has Nana Patekar back in a role that is right up his street.

But for the film to work, it would have needed much more by way of a convincing script and at least a few believable characters. It has neither.

It is an ill-advised, rough-hewn sequel to what is widely, and rightly, regarded as one of Mumbai's better cop dramas.

The director appears to believe that skewed camera angles and a grating background score are all that are needed to pull off an 'epic' about an upright cop caught in a life-and-death battle with smarmy gangsters.

Patekar, reprising the character of no-nonsense encounter specialist Sadhu Agashe, does his best to salvage the mess but to no avail.

Nothing that the veteran actor brings to the table - most of it smacks of off-putting mustiness - can give Ab Tak Chhappan 2 the firm legs that it seeks so that it can break into a trot. It only manages to limp along.

The cop-hero is on the screen to send the body count soaring, but he does not exactly go around pumping bullets into the hearts of criminals.

What he does is worse: spew half-hearted homilies and deliver dire warnings. They never hit home.

The original Ab Tak Chhappan came out over a decade ago. Apart from the crucial fact that Bollywood was a different place back then, that film, produced by Ram Gopal Varma and directed by Shimit Amin, had both dramatic intensity and strong undercurrents of realism.

Much water has flown under the bridge since then and the follow-up, made by a team that had absolutely nothing to do with the 2004 cop drama, is a pale shadow that turns hazier with every passing minute.

The trigger-happy protagonist (Patekar), who has retired to a life of tranquility in a village and spends his hours with his teenage son, is drawn out of hibernation by repeated appeals from the home minister (Vikram Gokhale).

The shadow of a gang war looms over Mumbai and Sadhu Agashe's rough-and-ready tactics are needed all over again.

Once he has grudgingly walked into the murky and bloody arena of crime-fighting, Sadhu Agashe pulls out the stops and goes hammer and tongs at the men that he has been deployed to eliminate.

So, what's new? Ab Tak Chhappan 2 peddles old wine in what clearly looks like a bottle recycled without much imagination.

As in the original, this film has a policeman (Ashutosh Rana) who has a massive axe to grind. He is peeved no end at Sadhu Agashe's return to the force and loses no opportunity to hinder his mission.

The conflict between the two grown-up men in uniform plays out like a fight between two bickering schoolboys.

In fact, that is the general level that Ab Tak Chhappan 2 operates at. It is a copy-and-paste job in which the twists are laboured and predictable and the dialogue is ham-handed.

The film also has Gul Panag in the guise of a crime reporter. The part is sketchily written and the actress looks as lost as the rest of the cast.


The other actors that we see on the screen - among them are the likes of Mohan Agashe and Dilip Prabhavalkar - are similarly wasted.

Does Ab Tak Chhappan have any redeeming feature at all? Well, it has no songs. But, then, who would feel like singing when trapped in a darkened hall where Ab Tak Chhappan 2 is playing? Stay away unless you are a diehard Nana Patekar fan.