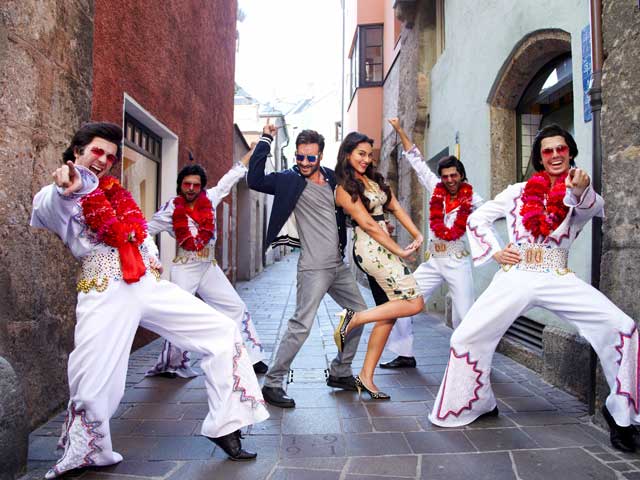 When a reviewer is confronted with a Bollywood star vehicle as spectacularly vacuous as Action Jackson, the usual tendency is to go a touch easy with the potshots.

In other words, one dismisses it as a film meant only for diehard fans of the lead actor and leaves it at that.

But in the case of Prabhu Dheva?s latest all-out mockery of moviemaking, one would be inclined to think twice before making any such unilateral claim.

Would any actor?s fans, at least those that are in their right minds, be so undemanding as to lap up something as excruciatingly trashy as Action Jackson?

The film proffers the worst of everything ? obnoxious characters, mindless situations, juvenile action sequences, raucous music, bizarre dance routines and pathetically cheap gags ? with nary a sign of any redeeming feature that could lessen the blow.

Prabhu Dheva the director seems to have lost it completely. But what, pray, was Ajay Devgn thinking when he chose to be part of this monstrosity?

A title card at the end of Action Jackson declares that this is ?a film by Prabhu Dheva?. A film? If this is cinema, anything shot with a movie camera is cinema.

The titular star struts across the screen flaunting his muscles in two separate avatars ? one is a small-time Mumbai hoodlum who pours rum into pani-puris, the other is the loyal right hand man of a Bangkok mafia don.

One is called Jay, the other is Vishy. It is all so wishy-washy that you would want to send both the blokes to the cleaners.

The identity of the don?s loose cannon surfaces minutes before the intermission, and he causes just enough mayhem to show that he means business.

What that really means in essence is nothing at all. So do not even apply your mind to deciphering what is going on. It could be seriously damaging.

This year, Bollywood has foisted a massive amount of muck upon us and not only got away with it, but, on many occasions, also gone laughing all the way to the bank.

If Action Jackson, too, does as much, the joke would on the audience, and the audience alone. It would be a sorry reflection on this nation?s moviegoers.

From the first scene to the last, Action Jackson is cringe-inducing film that revels in scraping the bottom of the barrel.

It is so execrable that it makes you wish you had walked into the movie theatre armed with a remote control handset with only two options ? Stop and Fast Forward.

The film opens with a brace of daylight killings by a bunch of thugs in a picture postcard part of the world.

The weirdly attired murderers, we figure, are looking for a fugitive called Action Jackson.

They do get a lot of action all through the film ? they are mostly at the receiving end ? but Jackson proves to be a slippery customer.

He has a lookalike after all, and the two men keep swapping places, creating widespread confusion, not the least for those members of the audience who still haven?t switched off completely.

Don?t even think of slipping into a nap to escape the assault. Action Jackson is a Prabhu Dheva film, so the soundtrack is so deafeningly loud that it could rattle the dead out of their graves.

As for the other characters in this free-for-all action flick, none comes anywhere near the realms of sanity.

There is this glass-eyed mafia don named Xavier Fonseca (Tamil actor Anantharaj in his first Bollywood outing). His name is intriguing all right; the rest of him is pure bunkum.
But even he is an epitome of restraint compared to his crazy little skimpily clad sis, Marina (debutant Manasvi Mamgain), who is so violently obsessed with her bro?s most trusted hitman that she raises hell when the latter spurns her advances.

Also in the pulpy plot is a down-on-luck lady, Khushi (Sonakshi Sinha), who seeks happiness in catching a stranger with his pants down, and a dutiful wife (Yami Gautam) who comes out of the woodwork once in a while in the second half to push her man into breaking a few more bones.

Even by the pitiable standards that Action Jackson sets for itself, Kunaal Roy Kapur as the bumbling sidekick of one of the two Ajay Devgns presents a sorry sight.
It there is anything here that sinks lower than Kunaal Roy Kapur is forced to do, it is the film itself.

Action Jackson, a surefire Golden Kela contender, could give Humshakals a run for its money. Give it a miss.