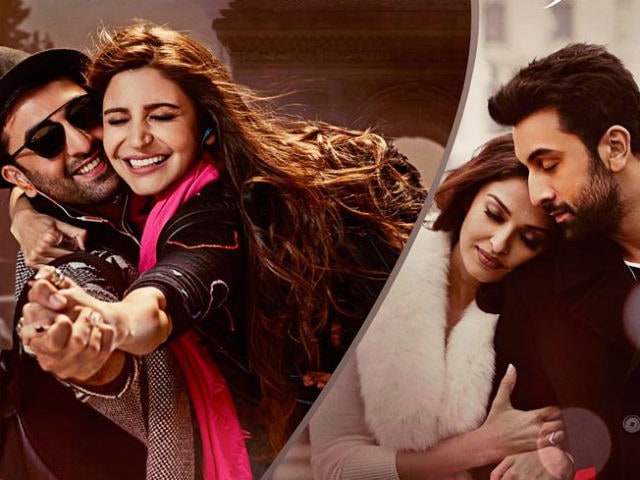 It is an infectiously buoyant, emotionally engaging and superbly acted drama that could disarm even the most inveterate of cynics.

The result is an efflorescent, vivacious tale that pans on locations across London, Paris, Vienna and, briefly, Lucknow.

Ae Dil Hai Mushkilexplores unrequited love, heartbreak and grief with a lightness of touch that we rarely encounter in big-budget Hindi cinema.

Even as the characters negotiate the complexities of falling in love and yet failing to go the whole hog, they do not froth at the mouth and deliver whiny platitudes.

If you are in the mood to nitpick, you might justifiably question the problem-free lives of these wealthy, jet-setting characters that have no worry in the world about things other than matters of the heart.

Are you a first-class kind of rich or a private jet kind of rich, the heroine asks the hero. "Private jet," the latter replies nonchalantly. No confusion.

We know that the male protagonist is a singer and wants to make a career in music. But until he becomes an internet sensation with his voice late in the film, there is no way of knowing if he is really serious about his ambition.

But with the lead actors doing a wonderful job of keeping the bouncy ball of a tale in control, there is nothing at all - well, almost nothing at all - in Ae Dil Hai Mushkil that poses any mushkil for easy absorption.

Ranbir Kapoor, always a delight to watch, and Anushka Sharma, who takes a tad more time to get going, strike up a most magnificent on-screen duet and generate heart-warming sparks.

Fawad Khan (in a crucial cameo as a DJ adept at making people dance to his tunes) and Shahrukh Khan (in a surprise, unforgettable scene) add sheen to the film.

Aishwarya Rai-Bachchan, too studied and self-conscious for a film that otherwise does its best not to be too earnest, is a bit out of sync with the flow of Ae Dil Hai Mushkil. Mercifully, she doesn't get too much screen time.

Ultimately it is Johar's screenplay that lifts Ae Dil Hai Mushkil above the ordinary. It is bright and breezy, if not always subtle and nuanced.

For the most part, it swings from the delightfully droll to the intensely dramatic, without losing either its way or its balance.

The dialogue (credited jointly to Johar and Niranjan Iyengar) banks upon a combination of wacky humour, subtle wit and light-on-the-mind pop wisdom.

A kiss that the awkward young man tries to plant on the party pickup girl's lips turns out to be a total disaster.

He spends the rest of the film trying to get the act right. But Ae Dil Hai Mushkilisn't only about carnal overdrive. It is about platonic love more than anything else.

The film explores the tussle between the urge to seek love of the regular kind and the need for lasting, no-strings-attached friendship, with Ayan representing the former and Alizeh the latter.

"Pyaar me junoon hota hai, dosti mein sukoon," says Alizeh, who sees a "bina pram ka bachcha" in Ayan. Ayan, however, has other ideas but struggles to get his point across forcefully enough.

Alizeh's first love, Ali (Fawad Khan), resurfaces and Ayan's pursuit of the girl he loves without reciprocation is cut short.

On the rebound, he finds a divorced Saba (Aishwarya Rai Bachchan), a sensitive poetess who has a bad marriage, an experience that has helped her take her output to a different level.

The principal characters in Ae Dil Hai Mushkil are not governed by established Bollywood rom-com rules. They thrive in open, undemanding relationships, in which neither the man nor the woman calls the shots. It is the heart - and occasionally the mind - that does.

The film dwells upon the many shades and purposes of amour. If one girl rues the fact that her boyfriend was her zaroorat (need) while she became only his aadat (habit), another, a more mellowed woman, is not content to be a man's zaroorat. She aspires to be his khwaish (desire).

The film attaches other tags to "ek-tarfa" (one-way) love - majboori, taaqat and cancer, but pulls back deftly from pushing one ahead of the other.

And of course the soundtrack has a complement of lively numbers composed by Pritam.

In one scene, after checking into a Paris hotel, Ranbir's character alludes to a feeling of "dil ka pet bhar gaya."

That is precisely the feeling that the audience is most likely to take away once this film has woven its magic.

It employs the devices of mainstream Bollywood, but does so with an acute awareness of exactly where to draw the line so as not to stray into overt bubblegum territory.