Against The Sun Movie Review

It is neither motivating nor enthralling. 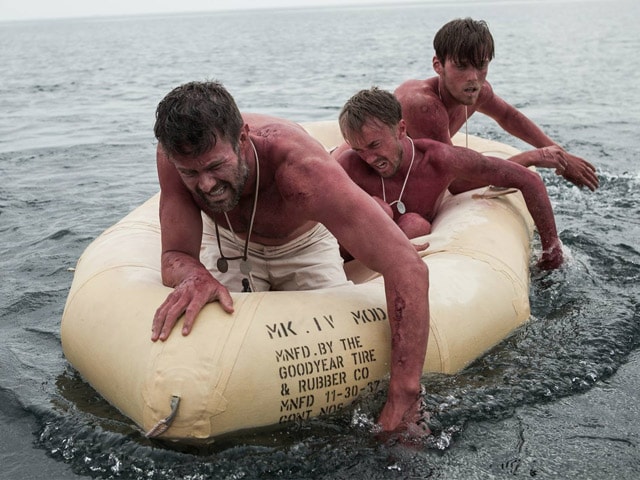 A harrowing 34-day ordeal of survival and endurance, Against The Sun is based on Robert Trumbull's novel The Raft. It's a true story that occurred during the World War II.

On January 16, 1942, three US Naval Air Force men, airborne in the South Pacific seas, realise that they have strayed away from their course. They don't have enough fuel to get back to their aircraft carrier and the inevitable happens. The aircraft crash lands into the sea and sinks, but not before the three could struggle to cling onto an inflatable rubber raft.

Once in the raft, the three men introduce themselves as pilot Harold Dixon (Garret Dillahunt), bombardier Tony Pastula (Tom Felton) and radioman Gene Aldrich (Jake Abel). And a quick survey of the raft reveals that they have, "no flashlights, no maps, no food and water."

Dixon being the pilot, takes charge of the raft and dictates what gets thrown over. The other two oblige in the faith that the leader knows the best.

Cheerful and with the hope they would be rescued soon, they mime serving each other coffee, discuss food at home and lighten their anguish. And, despite being clueless of where in the sea they are, rudderless and directionless, they maintain a positive disposition.

But soon they realise that Dixon is just another fallible human being. Their hope turns into despair when they realise that they have no option when the fish would not bite the bait they set. Reality sets in, Aldrich who believes in survival of the fittest, rebels. Using his pen-knife he catches a shark and they feast.

Gradually as days pass, you see the trio in different moods, singing songs and nursery rhymes, praying fervently and hoping for destiny to take its own course.

Visually and thematically, the film has traces of director JC Chandor's All Is Lost, Ang Lee's Life of Pi, Angelina Jolie's Unbroken and Alfred Hitchcock's Life Boat. But unlike any of these films, there are no overtly dramatic moments in Against The Sun. With limited resistance from nature and inter-personal conflicts, the pace stagnates on a languid narration.

With 90 per cent of the film shot entirely on the small raft in the middle of the sea, the film holds your attention because of the excellent cinematography by Petr Cikhart. Though some of the wide angled night shots look staged, the day shots appear to be natural. The raft tossing on the rough waves and the actors struggling to hold on to the raft is a brilliant combination of action choreography and filming.

Overall, Against The Sun is just another film about survivors of World War II. It is neither motivating nor enthralling.