Airlift is a film that every Indian must watch 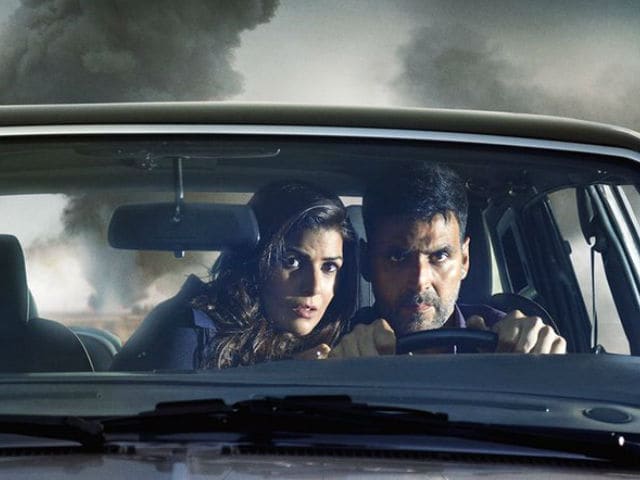 Hindi cinema history tells us that mainstream storytellers in Bollywood face many a pitfall when they work with real-life stories.

They frequently succumb to the temptation to inject exaggerated drama into the narrative. In the bargain, they end up tumbling with a thud between two stools.

Neither is it easy for their ilk to handle a tale of heroism aimed at highlighting what "we Indians" can achieve when we all deign to pull in the same direction.

Mumbai filmmakers have all too often turned such accounts into flabby, flag-waving exercises meant only for those who buy into such counterfeit cinematic constructs.

Raja Krishna Menon, writer and director of Airlift, suffers no such mishaps.

His recreation of the harrowing events leading up to one of the most glorious chapters in Indian civil aviation history is marked by moderation and a keen sense of balance.

Menon steers clear of the traps in his way while delivering a sharply written, gripping thriller that rarely, if ever, flags.

This saga of a rescue mission that made it to the Guinness Book of World Records warms the cockles of one's heart but isn't jingoistic in the least.

That is a rare quality indeed in a pre-Republic Day release purportedly designed to douse us all with patriotism.

To begin with, Airlift focuses on the shocking repercussions of military adventurism on ordinary people.

At the receiving end here are the residents of Kuwait, a nation that was invaded by Saddam Hussein's Iraqi Republican Guard in August 1990.

The attack renders 1,70,000 Indians penniless and homeless as a rampaging army goes about killing defenceless Kuwaitis with impunity.

In the face of grave danger to himself and his immediate family of three, a wealthy and politically connected Indian businessman Ranjit Katyal (Akshay Kumar) does not take the easy way out despite the initial urge to flee to London.

He is no spotless India lover, which is made amply clear right upfront by the profit-driven entrepreneur's disparaging remarks about the country of his birth.

Yet, against the counsel of his wife Amrita (Nimrat Kaur), Katyal decides to stay put in order to help the other Indians that are in duress and are far more vulnerable than him.

He sets up a refugee camp to house and feed thousands. He also negotiates with all and sundry, including the then Iraqi foreign minister Tariq Aziz, to ensure the safety of the Indians caught in the war.

Most importantly, he opens a channel of communication with a solitary external affairs ministry official in Delhi, Sanjeev Kohli (Kumud Mishra), even after the embassy in Kuwait City is vacated and the stranded Indians are left to fend for themselves.

This tale is set in the pre-liberalisation, pre-satellite television days and cracking open the bureaucratic gridlock takes a mammoth effort on the hero's part - this forms the crux of the drama.

This was also an era when India's elected rulers saw value in keeping a secret operation just the way it was meant to be - secret.

So the unbelievably massive evacuation pulled off by functionaries of the Indian government and pilots of Air India, Indian Airlines and the Air Force remained unpublicised.

The director devotes a large chunk of Airlift to the tense moments leading up to the dramatic evacuation, but the impact of the actual rescue flights - 488 of them all - are summed up quickly.

The director's decision to eschew grandstanding benefits the film as a whole, making it completely believable and convincing as a human drama.

Not that there aren't points in the film when it flirts with just a hint of excess, but these slip-ups are too few and far between to pull Airlift down irretrievably.

One of the more interesting elements in the film is the layered manner win which Menon builds up the relationship between Katyal and his wife.

They aren't an ideal, lovey-dovey, Bollywood-style couple. They are frequently at each other's throat, if only playfully. But when push comes to shove, they stand up for each other.

Akshay Kumar, in what must surely be one of his finest performances, is so utterly convincing as the conflicted but tough Ranjit Katyal that there are times in the film when he does not appear to be acting at all.

The character that Akshay plays is a conflation of two real-life entrepreneurs who stepped up to the plate when the chips were down a quarter century ago.

The actor lends believable human dimensions to the gallant figure of Katyal, who isn't fighting an evil enemy as much as he is confronting the forces of history and destiny.

No less extraordinary is Nimrat Kaur in her first big screen role since The Lunchbox.

In one scene in which she puts a particularly obnoxious refugee camp inmate (Prakash Belawadi) in his place, Kaur brilliantly achieves emotional heft through a mix of controlled dialogue delivery and gestural restraint - the hallmark of a truly accomplished performer.

Airlift is a rare megastar vehicle that derives obvious benefits from the lead actor's magnetism without subjugating itself to the need to make the most of his presence in the cast.

Airlift, at the outset, has a party song that is inevitably hijacked by the male protagonist.

But as the number winds down, we see the original crooner sitting away from the action, his shoulders slouched and his microphone dangling near his feet.

This fleeting moment is clearly Menon's sly way of articulating what he really thinks of such Bollywood musical set pieces.

As for the rest, barring a scene in which the tricolor is hoisted atop Amman airport with some pomp and pageantry, he eschews melodrama and presents a close-to-the-bones reenactment of an audacious rescue operation.

Airlift is a film that every Indian, and every Bollywood buff despairing for genuinely high quality storytelling, must watch.