Angry Indian Goddesses is unlike anything Hindi cinema has produced before 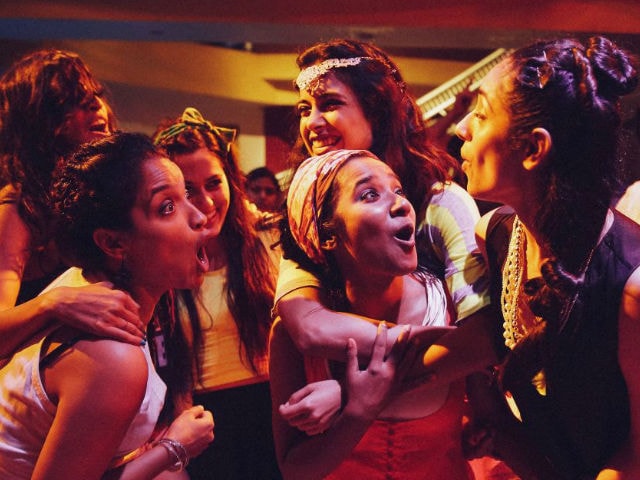 But under its cool, casual and cheeky chitchat on matters both saucy and solemn, it is also a trenchant study of a society festering from within.

Its serious intent notwithstanding, Angry Indian Goddesses does not overly dilute its air of moderated levity, at least not until the dying moments of a free-flowing drama in which a gaggle of girls throw all the punches.

But that is not to say that it is a guilelessly celebratory film about female bonding.

If anything, it holds up a mirror to all the ugliness that Indian women have to constantly encounter, no matter how much they might close ranks and seek joy and beauty.

So, as seven feisty girls gang up in Goa to take on deeply entrenched patriarchal shibboleths, they demolish more than just cinematic stereotypes.

They reveal the many faces of Eve in a manner that is both entertaining and enlightening.

Writer-director Pan Nalin blends breezy humour, doses of pathos and shocking jolts in a rambunctious story that is variously about friends in need, partners in crime, and rebels with a cause.

Some of the acts of defence and defiance that these pretty libertines resort to border on the reckless.

But every inner urge that they feel, articulate and respond to is a blow aimed against the gender prejudices ingrained in the average Indian psyche.

The girls talk freely of sex and desire and go hammer and tongs at each other's foibles.

They also sing and dance with gay abandon as they seek to get in touch with their constantly threatened sense of freedom.

In one sequence, they gawk at a beefy, bare-bodied male neighbour as he washes his car - an obvious reversal of the device of the drenched damsel so beloved of a segment of Bollywood filmmakers.

Barring the spirited housemaid Lakshmi (Rajshri Deshpande), who has a dark secret buried in her heart, none of the 'goddesses' is economically and socially disadvantaged.

Yet, at their workplaces and in their personal lives, each faces challenges that constantly push her to the back foot.

They all have obstacles to confront and surmount. Material privileges are no shield against gender bias and lopsided societal impositions.

Pan Nalin gets the individual preludes out of the way through a series of flashy sequences designed to provide sneak peeks into the backgrounds of the girls.

The stage is thus quickly set for the all-female congregation that triggers a chain of events and themes, leading all the way up to a well-orchestrated and swift climax.

Fashion photographer Freida D'Silva (Sarah-Jane Dias), who has withdrawn from the rat race in order to figure out the true purpose of her calling, invites four of her closest friends to her bungalow in Goa.

They know not why they are there until Freida springs a surprise on them.

She announces that she has found a soulmate and is all set for marriage. But she keeps the identity of the betrothed under wraps - heightening the curiosity of the other girls.

Freida has a round-the-clock help in the form of Lakshmi and Suranjana has a six-year-old daughter, Maya (Nia Dhime), in tow. Both contribute significant sub-plots to the film.

The two women, being on opposite sides of a sharp ideological divide, have a history of bitter differences.

Suranjana is eyeing a disputed plot for a new factory and Nargis is opposed tooth and nail to the company's plan to uproot the rightful inhabitants of the land.

But that is only one of the many battles the girls fight in Angry Indian Goddesses, both individually and collectively.

Suranjana herself has failed to balance life and work, resulting in her daughter growing up with a feeling of being neglected.

Joanna, a butt of ridicule owing to her accented Hindi and trapped in a cycle of C-grade exploitation flicks, is in search of a breakthrough in her career.

Madhureeta, Mad to her friends, is depressed because her previous album has sunk without a trace.

Luckily for her, she has a supportive man in her life, Zain (Arjun Mathur), who gives her the courage to hang in there.

He is the only major male character in this tale, apart from an infuriatingly insensitive policeman (Adil Hussain), who surfaces in the finale as the film takes a serious turn.

The story has another man who is mentioned but not seen - Pammi's businessman husband who thinks nothing of nixing his wife's entrepreneurial ambitions.

Much of the dialogue in the film is improvised by the actresses, which lends the drama spontaneous wit and infectious energy.

The fact that the cast members are a mix of models, VJs, beauty queens and seasoned theatre/television/film actresses helps - they know the world they are talking about.

That is not to say that every strand in the film is perfect. To begin with, parts of Angry Indian Goddesses seem somewhat superficial and emotionally hollow.

The film also overreaches a tad, touching upon too many hot-button issues, from land acquisition to sexual violence against women, from gay rights to judicial slackness, and from the pressures on successful working women to the sloppiness of law enforcement.

But as the disparate characters emerge with clarity by the halfway point, and the actresses come into their own, every one of them becomes believable.

And the multiplicity of themes are intertwined well enough for none of the concerns to stick out like an unnecessary appendage.

Angry Indian Goddesses is a must-see and not only because it is unlike anything Hindi cinema has produced before.

It strikes a fine and rare balance between thematic gravitas and breezy entertainment.