Any Body Can Dance 2 Movie Review

ABCD 2 does not scrimp one bit on melodrama 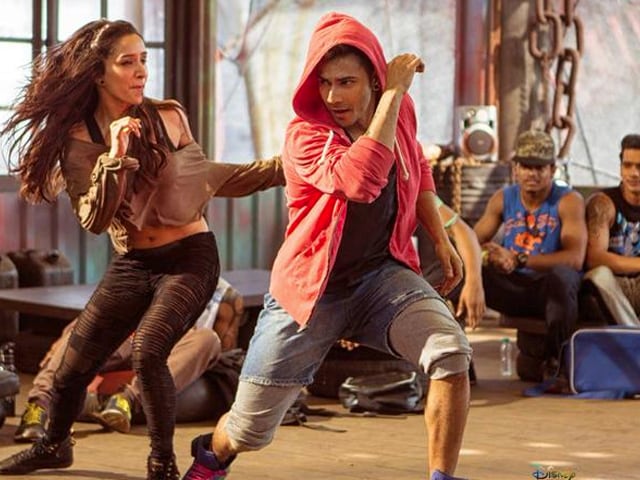 A cocktail bar boy whose Padma Shri-winning mom "died with her ghungroos on" makes one false move and his dreams come crashing down.

On a reality show, his dance troupe, Mumbai Stunners, performs an act lifted from the repertoire of the Filipino All Stars.

They are brutally exposed by the judges (including the film's choreographer and director Remo D'Souza) and banished into oblivion.

The copycats become butts of ridicule wherever they are: Suresh (Varun Dhawan) in his watering hole and Vinnie (Shraddha Kapoor) in the beauty salon she works for.

Pizza delivery guy Vernon (Sushant Pujari) faces much worse: a customer refuses to pay him because he is a cheat.

At this rate every other maker of Mumbai movies and Hindi film music should be distributing free pizzas to the world by way of punishment for plagiarism!

How the disgraced hero and his motley group of hip hop hot steppers pick themselves up and claw their way back forms the spine of ABCD 2.

Song and dance is, needless to say, a Bollywood staple, but pure dance films are rare. Rarer still is a 3D dance film. But whatever novelty ABCD 2 delivers is only skin deep.
The story it tells is as hackneyed as they come: the young protagonists, led by an inspirational dance guru (Prabhu Deva) who has a back story of his own, travel from the dark, dank school of hard knocks to the bright lights and distracting inducements of Las Vegas to bask in global glory.

All through this two-and-a-half-hour sequel to the 2013 3D hit, ABCD - Any Body Can Dance, the dance steps are dazzlingly dramatic.

But that is the very least you would expect from a film helmed by a choreographer and featuring Prabhu Deva in a pivotal role.

Sadly, the drama that the screenplay (Tushar Hiranandani and Remo D'Souza) whips up is strictly for dunces.

Ignore the latter and you might enjoy parts of the former. With a cast crammed with energetic guys who need no provocation to set the dance floor on fire, ABCD 2 delivers passages of stunning musical calisthenics.

Varun Dhawan is no mug at this game and he holds his own alongside the likes of Sushant Pujari, Dharmesh Yelande, Raghav Juyal, Punit Pathak and Lauren Gottlieb.

The only non-dancer in the principal cast is Shraddha Kapoor, but she too melds perfectly into this cheerfully breathless world where everybody is a master twirler.

ABCD 2 is supposedly inspired by the exploits of two real-life Nalasopara boys who put India on the world map of hip hop in 2012 by winning the world championship in Las Vegas.

But there is little in the film that suggests that it has anything to do with the actual world.

Everything is larger than life in this unidimensional portrayal of a universe where passion for dance overshadows all else.

Despite its rather lame storyline, ABCD 2 does not scrimp one bit on melodrama. It throws the whole kitchen sink into the attempt to generate fervour for the fluttering flag.

As the film rushes helter-skelter towards its climax, the director pulls out all the familiar tropes from his little box of tricks.

Among these are an estranged wife (Tisca Chopra) now happily settled in the US, a separated son whose heart still beats for India, an injured dancer necessitating a hurried replacement and another one who coughs blood as the competition reaches a crescendo.

If that were not enough, the characters are given to unabashed displays of overarching religious zeal and, of course, much patriotic chest thumping and tricolour waving.

So we hear Bharat Mata Ki Jai on more than one occasion. Ditto Ganpati Bappa Morya. And while they are at it, can Vande Mataram be far behind?

Dance and desh bhakti make for a potent potion that quickly degenerates into cringe-worthy inanity.
After a tolerable first half, ABCD 2 turns increasingly corny with every passing post-interval sequence.

The wide-eyed Indian dancers go on a spin around Sin City on an open-top Big Bus, stop by at an Indian restaurant (run by Pooja Batra) and get into a brawl with a rival team. Pointless detours all.

There is a girl in the mix all right and another one gets added to the team in the second half. That apart, the boys, now called Indian Stunners, lose no opportunity to pay cacophonous lip service to the hero's departed mom and to 'Mother' India through the means of both slogan and song.

But in the big bad world of hip hop, muscular India cannot allow more than one girl to take centrestage at any given time. If that doesn't sum up what Bollywood is all about, nothing ever will.

Somebody asks Prabhu Deva's character: Who are you? His retort is the same old: Should I tell him or show him?

He proceeds to give onlookers an eye-popping demo of what he is known for before retreating firmly back into his drunken shell.

That pretty much is the story of ABCD 2: it shows us a great deal, but tells us little.

For dance freaks, there is much on offer. For lovers of cinema, ABCD 2 is a hazy blur of a movie.