The tale has the muscle to run the distance 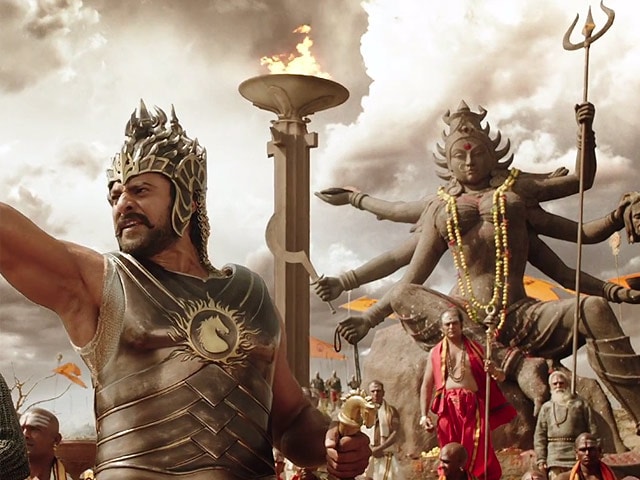 Scale of ambition: gargantuan. Quality of VFX: out of the ordinary. Content: only occasionally gripping. Final impact: pretty strong.

That, in a nutshell, is SS Rajamouli?s Telugu and Tamil fantasy epic Baahubali ? The Beginning, which has been released nationwide in Hindi in collaboration with Karan Johar?s Dharma Productions.

The spectacular universe that the film conjures up is filled with magic, but the larger-than-life characters that populate its extraordinary expanse do not belong to any known mythic landscape.

To that extent, Baahubali, driven by the titular superhero who pulls off mind-boggling feats both in love and in war, throws up many a surprise that isn?t altogether meaningless.

The story by Vijayendra Prasad, however, does not offer much more than standard a tale of valour, betrayal and vendetta set in a fictional kingdom, Mahismathi, where two brawny cousins square off against each other for the throne.

The good king-bad king construct is very, very old hat indeed, but the manner in which it is cast by director and co-writer Rajamouli ensures that the tale has the muscle to run the distance.

Visually impressive, the first 20-odd minutes of the nearly three-hour-long film constitute a prelude of sorts.

As it unfolds, we learn that the protagonist is a prince spirited away to safety from a kingdom atop a mountain that hides behind a spectacular curtain of water.

The boy is named Shiva and reared by a tribal woman who takes him to be a boon from the gods.

He makes numerous failed attempts to climb the face of the waterfall and his adoptive mother is at her wit?s end.

A godman is summoned and he intones: Shiv jo sochta hain wohi karta hai (Lord Shiva does what he wishes).

Our hero is no ordinary mortal: he yanks a huge Shivling from the bank of the river, carries it a long way and plonks it right under the waterfall so that his mother is spared the trouble of bathing it every day.

One fine morning, Shiva espies a beautiful, curvy and provocatively clad apparition literally floating around the edges of the waterfall.

Lured by the lady, he finally makes it to the top of the forbidding mountain and begins to stumble upon the truth of his origins as complete strangers in an unknown land hail his advent.

But before the film gets to that flashpoint, it limps through a laboured love story between our hero and the sword-wielding Avanthika (Tamannaah), who conceals her femininity behind a warrior?s attire.

Shiva surreptitiously draws tattoos on her arm, serenades her with great ardour, peels off her hard exterior layer by layer and, when bloodthirsty adversaries pursue her and an avalanche threatens her life, he swings into action to show off his survival instincts.

The second half of the film is a long flashback dominated by an unending battle sequence that vacillates between audacious and tiresome.

Two armies face each other and a variety of tactics and weapons come into play.

Amarendra Baahubali (Prabhas in a dual role) and Bhallala Deva (Rana Daggubati) compete with each other for the head of the chieftain of the invading force.

Spotted in the course of the fierce battle are, among other things, a chariot with giant cleavers, sharp-edged spears, scimitars that never fail to cut deep, and a mace that doubles up as a deadly iron-ball flail.

For those that might have patience for such bloody slash-and-thrust contests on the big screen, this protracted scene will definitely stand out, as will the magnificently created avalanche that the lead pair is caught in earlier in the film.

For a pan-Indian audience not clued into Telugu blockbusters, Prabhas might seem like a poor man?s Rajinikanth, but he sure has undeniable screen presence. He does both swagger and snigger with aplomb.

Rana Daggubati pales somewhat in comparison but holds his own amid the excesses of the film and the sketchiness that mars his character.

If this is the beginning, one can only wonder what the culmination will be like.

Will Bahubali ? The Conclusion, slated for release in 2016, deliver more of the same? No matter what, it should have no trouble finding takers.