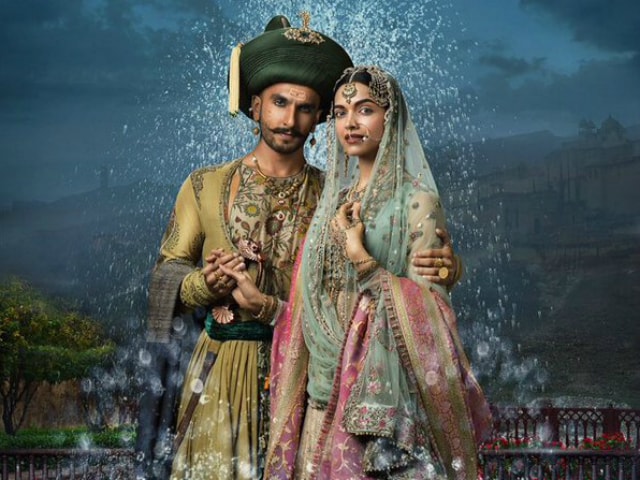 The overwrought but impressive extravaganza elevates the legendary 18th century warrior-hero determined to establish Hindu rule across the subcontinent to the level of a selfless crusader for love in a climate of hate and bigotry.

Bhansali fictionalizes several of Bajirao's key battles but focuses more on the married Peshwa's passion for Mastani, the beautiful and courageous half Rajput, half-Muslim princess of Bundelkhand.

Every emotion in the film - be it love, longing or valour on the battlefield - is translated into a grand and elaborate song-and-dance routine.

A couple of the musical set pieces do not ring true in a historical epic about a man whose place in history is primarily as an unvanquished general.

These are but minor aberrations in a sweeping love story that is mounted on such a grandiose scale and crafted with such vaulting zeal that eventually the smaller details cease to matter.

Bajirao Mastani is, in many respects, Bhansali's most subversive film to date. Its central message is that all religions preach love but love has no religion.

Love, the film conveys via Irrfan Khan's voice, is a religion by itself and those that swear by its tenets become immortal like Bajirao and Mastani.

Peshwa Bajirao, played with flair by Ranveer Singh, takes on the unbending clergy and his own angry family to uphold Mastani's dignity after she arrives in Pune as his second wife.

To liven up this "love story of a warrior", Bhansali, as is his wont, rustles up a series of spectacular visuals, each as blindingly awash in red, russet and gold and bathed in light and shade as all the others.

Some of the pivotal scenes are well conceived and executed and their impact is enhanced by the impressive performances from the principal cast.

While it is difficult to take one's eyes off the screen, the pace of the narrative, which runs for more than two and a half hours, is not consistent.

Large parts of the first half of Bajirao Mastani appear to serve only one purpose: setting the stage for a more explosive second half.

But the wait is well worth it: the pace of the film quickens considerably after the two women in Bajirao's life come face to face.

The headstrong warrior's wife Kashibai (Priyanka Chopra), mother Radhabai (Tanvi Azmi), brother Chimaji (Vaibhav Tatwawdi) and son Nana Saheb (Ayush Tandon), each in his own way, seek to prevent Mastani from worming her way into the Peshwa fold and the family's abode - Shaniwarwadi.

Mastani (Deepika Padukone) is shunned, humiliated and even brutalized as she refuses to give up her claim on the man she loves.

She equates ishq (love) with ibaadat (worship), and notwithstanding the religious and social resistance from those around Bajirao she stands firm and bears him a son.

Mastani wants her son to be called Krishna but the custodians of faith force her and the boy's father to settle for a less Hindu name, Shamsher Bahadur.

Right at the outset - obviously under mounting pressure from the descendants of Bajirao Peshwa and from some historical purists - the film offers what must surely go down in the annals of Bollywood as the longest-ever disclaimer.

Among other things, the director admits in the introductory rider that he has taken liberties with facts. He need not have bothered.

At no point does Bajirao Mastani look any different from all the fictional tales that Bhansali has spun in his eventful career.

Bajirao Mastani is watchable primarily because of the craft that is on view in the pretty frames lit meticulously by cinematographer Sudeep Chatterjee.

The characters allude repeatedly to the sky, to the sun and the moon, to the clouds and to the elements in general in the stodgy first half.

However, except in the competently mounted CGI-aided battles scenes, the sky is rarely seen.
The film instead shows the audience the Valhalla-like grandeur of the sets, the striking costumes designed by Anju Modi and faces lit by fire-torches.

The second half looks and feels markedly different because the visuals open out to take in the sky and the rain and the wind to convey the larger war that Bajirao must fight against his co-religionists.

Bhansali gives us a trio of remarkable women in Bajirao Mastani. Besides the admirable Mastani, a magnificent warrior-princess and a courageous lover, the film has Bajirao's aggrieved but dignified wife Kashibai and his widowed mother.

Deepika is absolutely outstanding as Mastani, a woman in a man's world, a Muslim in a conservative Chitpavan Brahmin setting, and a mother driven by the power of love.

Priyanka has less in terms of footage and hangs around in the backdrop for the most part. But when the drama gets into its stride, she too comes into her own.

Tanvi Azmi as Radhabai, a tonsured lady in white calling the shots and constantly testing the patience of her strong-willed first-born, delivers a power-packed performance.

Bajirao Mastani is Ranveer Singh's film. It has scenes - especially the one in which the male protagonist's presence and voice are pitted against the presence and voice of Raza Murad (in the guise of the Nizam of the Deccan) - in which he comes up a little short.

But there is no missing the enormous hard work that has been done in order to get into the skin of the character.

In one of the early scenes, Ranveer gets the Puneri accent to perfection, but, for an inexplicable reason, does not follow through with it.

Despite its failings, Bajirao Mastani is the work of a director who never shies away from going the whole hog.

Even when Bhansali isn't in full flight, he still manages to soar well above the mundane.

Bajirao Mastani is for those that think history is boring. There isn't a dull moment in this colourful and dramatic film that embraces excess with unabashed abandon.