Bangistan is the cinematic equivalent of a loose cannon 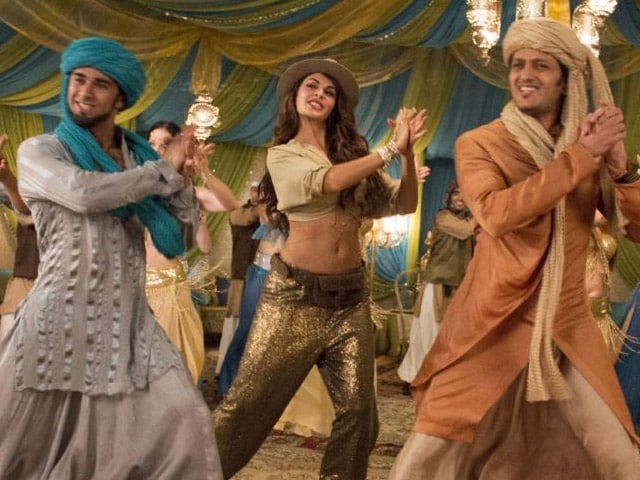 True to its title, Bangistan makes more than its share of noise. But this mildly wacky satire on the futility of religious bigotry does not make too much sense.

The central premise of the film is so overly pea-brained that the comedy that it delivers is 'explosive' only in that it manages to reduce any genuine prospects of humour to smithereens.

Two misguided lads from a strife-torn land called Bangistan, in their enthusiasm to serve a cause, get sucked into a global terror plot in faraway Krakow, Poland. That's quite a stretch!

The bombs that the duo plans to detonate prove to be an anti-climax. They go off well ahead of time.

The film, on its part, implodes even earlier. It runs out of ammunition halfway through and then scampers around in circles in the company of the two blundering protagonists.

Bangistan is the cinematic equivalent of a loose cannon that is way off the mark. But rest assured, its many messy misfires certainly aren't for want of trying.
If anything, first-time director Karan Anshuman goes all out to drive home his point about the primacy of peace, love and brotherhood in a world in the grip of hatred and violence. Clap, clap!

If only he knew of a concept called moderation and stopped short of the point of no return, the output might have been far less tedious.

Bangistan stretches its meagre narrative resources to snapping point, but is unable to achieve even a smidgen of coherence.

In the imaginary landscape that the film is set in, two religious leaders, one Muslim and the other Hindu (Tom Alter and Shiv Subramanian respectively), decide that they must do their bit for mankind and restore order.

So they draw up plans to head to the world religions conference in Krakow and deliver a joint appeal for amity from the pulpit there.

But two other religion-obsessed men - a guruji with political ambitions and a militant leader with designs to be the next Osama bin Laden (both played by Kumud Mishra) - conspire to scuttle the peace plan by sending a handpicked suicide bomber each to the venue.

The two chosen terrorists trade religious identities before the mission gets underway in order to fox the world.

The two men exchange predictably superficial inanities about faith. In one scene, they strip down to their bare essentials to reveal, well, striped undies of the same colour.

Yes, that is the depth that their constant banter plumbs. They have a go at each other over their assumed avatars and on the positives of the religion that each now represents.

Two other characters pop in and out of the picture: Rosie (Jacqueline Fernandez) and Bangladeshi migrant Tamim (Chandan Roy Sanyal).

The former works as a bartender in a pub called Bull and Boar, where the two protagonists discover the joys of shots of Polish vodka.

The latter is a glib cabbie who moonlights as an agent for illegal migrants.

While Tamim is heard at one point of the film referring to the two Bangistani troublemakers as "these bloody terrorists", Rosie makes no bones about the fact that she has no religion.

The result of this bunch of people working at cross-purposes is utter confusion, which reaches a crescendo in a grotesquely chaotic climax.

Bangistan is marked by a splash of colours, with green and saffron predictably holding sway over many of the frames.

But these shades never gel well enough to deliver an effective advertisement for the historic Polish city that the action unfolds in.

The involvement of the Polish Film Commission with the intention of promoting the country as a location is announced upfront in the credits.

Bangistan has been shot by Polish cinematographer Szymon Lenkowski. He does not lose any opportunity to capture the city of Krakow in all its splendour.
Unfortunately for Lenkowski and his beautiful country, the hammy actors keeping getting in the way and mucking up the view.

Bangistan, for all the hoopla that it whips up, is a damp squib that does not deliver much bang for the buck. It is neither a blast nor a riot.

It is more like an overpainted runaway truck that loses its wheels before the trip has well and truly begun.

It careens out of control before you can say bang and hurtles scratchily down a path that hits a dead-end all too quickly. Stay out of the way.

If you really desire to visit Krakow, pack your bags and spare yourself a Bangistan detour.