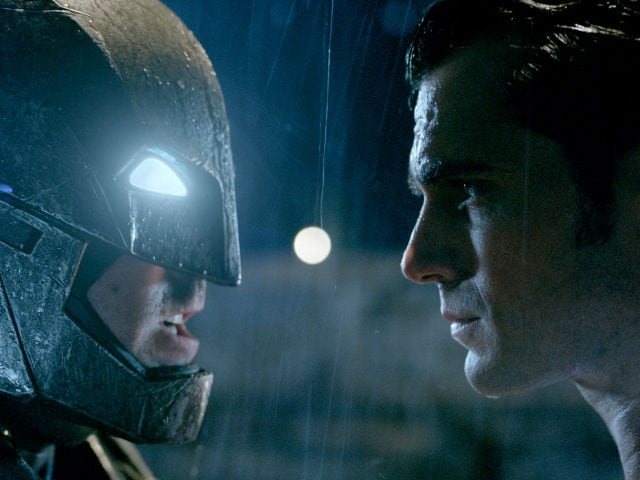 Batman v Superman: Dawn of Justice begins and ends with a funeral, which is fitting for a movie that plays like one long dirge.

Dreary, overproduced and underbaked, this nominal showdown between two of comic-dom's most mythic superheroes serves as a grim reminder of just how bad Man of Steel really was. That 2013 movie introduced British actor Henry Cavill as Superman, in a tea-colored miasma of dutiful action sequences and sadistically over-the-top violence.

Director Zack Snyder returns to those questionable core values in a film that replaces genuine intrigue and suspense with a series of confounding red herrings, tossing out solemn observations about men, gods, martyrs and saviors while invoking such hot-button issues as terrorism, drones and immigration.

Batman v Superman is so desperate for the audience to take it seriously that it forgets to have any fun at all: Rather than escapism and sensory exhilaration, viewers get down in the mire with protagonists who grimace, scowl and wince their way through heroics with the joyless determination of shift workers making the donuts.

Batman v Superman begins where Man of Steel left off - that is, with Superman laying waste to the futuristic city of Metropolis in order to save it. Appalled, millionaire orphan Bruce Wayne (Ben Affleck) worries that the new neighborhood vigilante is accountable to no one - unlike Bruce, who at least has to answer to his lifelong factotum, Alfred (a drolly amusing Jeremy Irons).

The point of Superman v Batman, of course, is to get these two brooding saviors of humanity to the ultimate showdown, and maybe launch an "Avengers"-worthy multiverse in the bargain. Snyder, with the dubious help of screenwriters Chris Terrio and David S. Goyer, does all he can to put off that final confrontation, keeping Bruce and Clark Kent on their separate paths, only to be brought together by the unhinged entrepreneur Lex Luthor, portrayed by Jesse Eisenberg in a jittery, hysterically pitched performance that resembles a gnat impersonating Heath Ledger.

Eisenberg is one of the few weak links in Batman v Superman, which actually features some terrific performances: Affleck has the square jaw and resolute demeanor to convincingly channel Bruce, who once he becomes Batman acquires an adenoidal speaking voice and a pair of Frankensteinian shoes that, if camera placement is any indication, Snyder has a fetishistic fascination with. As Superman, Cavill once again wears that vaguely put-off expression of someone who's just ingested something distasteful; he's much more appealing as Clark Kent for a Warby Parker age, doting on Lois Lane (Amy Adams) and wondering why his valiant efforts to save the world are seen by some as the suspect doings of an alien arriviste.

Suffused with paranoia and hostility, Batman v Superman engages in the kind of po-faced hyper-masculinity that can be seen as an apologia for privilege at its most unexamined and disarming: Sure, these guys swagger through the streets laying waste to all that's in their path, but their psychic burdens are unimaginable. They hurt. (And man, do they love their mothers.)

As a wish-fulfillment fantasy of potency and unassailable moral certainty, Snyder's vision is understandable, if not particularly distinguished or convincing. Chase scenes, explosions, beat-downs, shootouts and the final, brutalizing mano-a-mano all look cobbled together from generic elements of other movies, crashing into a rock-em, sock-em rubble of glass, steel, rain and polystyrene concrete. (Hans Zimmer's bombastically self-important score is just as derivative, in this case of all his other bombastically self-important scores.) An early callback to the fall of the World Trade Center on 9/11 manages to be both painfully timely and shamelessly opportunistic.

At a punishing 2 1/2 hours, it's all very turgid and unsmilingly sober - the direct opposite of the sprightly, witty, visually vibrant Avengers movies - but there are bright spots. Holly Hunter brings flinty brio to her role as a U.S. senator skeptical of Superman's motives. And Gal Gadot exudes both mystery and muscle as Wonder Woman, who shows up way too late to do way too little. (The same could be said for Diane Lane, here cast as Clark's Midwestern mom, even though she has enough glamour and moxie to embody a superhero in her own right.)

Strip away the trite character beats, rote plot points, random dream sequences and other narrative padding, and "Batman v Superman" comes down to the actors, their characters and whether they can sustain interest over the long haul. The answer is yes, if they wind up in the hands of filmmakers blessed with authentic imagination rather than serviceable technical chops.

Seen through one lens, Batman v Superman embodies the exhaustion of a genre that has long since outlived the ability to invest it with new relevance and meaning. Seen through another, it suggests that the slate is always blank, waiting to be re-inscribed or, better yet, smashed altogether. We can always use another hero. In the meantime, our heroes desperately need new life - not another dirge.

One and one-half stars. Rated PG-13. Contains intense sequences of violence and action throughout, and some sensuality. 153 minutes.