In Ben-Hur, the chariot race is spectacular, but the rest is pure schmaltz 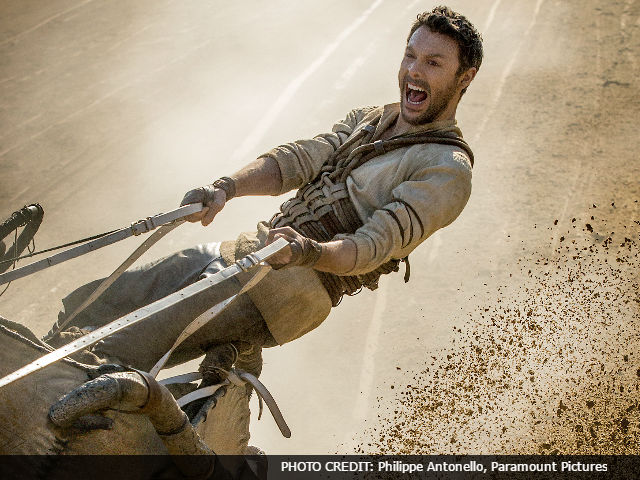 It takes a fair amount of chutzpah, if not outright hubris, to remake a film that won 11 Academy Awards, including Best Picture, Best Director and Best Actor. But even if the makers of the new Ben-Hur were merely trying to match, and not improve upon, the 1959 sword-and-sandal epic starring Charlton Heston as the Jewish vengeance-seeker from the time of Christ, they have missed the mark.

What is it about this summer, first with a Tarzan retread that nobody wanted, and now this?

It's arguable that director Timur Bekmambetov's restaging of the climactic, bloody chariot race - along with a ferocious naval battle in the Ionian Sea involving Roman galleys - is a 3-D showstopper almost worth the price of admission. But the cheesy religiosity of the film's otherwise worthy (and even topical) message - love trumps hate - lands with such brute force that you may feel like you've been trampled by horses when the moral of the story comes thudding down in the third act.


Produced by Mark Survivor Burnett and Roma Touched by an Angel Downey, the Christian husband-and-wife powerhouse behind such faith-based entertainment as the miniseries The Bible and the films Son of God and Little Boy, Ben-Hur is at its best when Bekmambetov is let loose on the action sequences. They display the visual verve that the director of Night Watch and Abraham Lincoln: Vampire Hunter is known for, even if they are a little too obscured by clouds of dust and sea spray to be completely intelligible.

But when the film, written by John Ridley (12 Years a Slave) and documentarian Keith R Clarke (In Search of Dr Seuss), allows itself some quieter moments, the movie's problems become all too obvious. The acting is mediocre, the cliches sprout like weeds and the dialogue is at times unintentionally laughable. Yes, the archrival of the film's hero really does says "Are we having fun now?" during the culminating race-to-the-death set piece featuring careening horses and mangled bodies.

The new film follows the rough contours of the 1959 plot, centering on the changing fortunes of Jerusalem nobleman Judah Ben-Hur (Jack Huston) and his adoptive Roman brother Messala (Toby Kebbell). Messala joins the Roman army to fight the empire's wars of expansion in Persia, Egypt, Germania and elsewhere. Judah stays home, maintaining his balance between a genial agnosticism and a temperamental affinity for the political cause of the Jewish "zealots" who, inspired by a young carpenter named Jesus (Rodgrigo Santoro), have been trying to throw off the yoke of Roman colonialism. After Judah takes the rap for an assassination attempt that someone else has made on the Roman prefect, Pontius Pilate (Pilou Asbak), our hero is condemned to row in the belly of a Roman galley. His mother (Ayelet Zurer) and sister (Sofia Black-D'Elia) are imprisoned.

Fast-forward five years, and the embittered Judah has worked his way back home under the aegis of an African trader (Morgan Freeman in ridiculous-looking dreadlocks) who has taken note of Judah's gifts as a horseman. This, of course, is the setup for a showdown between Judah and Messala, who, as Pilate's right-hand man, was responsible for Judah's banishment and his family's imprisonment. Payback will be sought in the form of a chariot race, a high-stakes form of competition in which the runners-up are routinely carted off the course on stretchers, or in pieces.


Despite the proselytizing pabulum spackled into the cracks between the action scenes, the race itself is a sight to behold. Wild and hyperviolent - with Huston and Kebbell doing their own stunts - the sequence has the visceral impact of several gut punches. But it's followed by a schmaltzy, unconvincing denouement, focusing on Christ's crucifixion, that feels, in spirit, like it was lifted from the mawkish film-within-a-film in the Coen brothers' snarky comedy Hail Caesar.


Christ's message of forgiveness and healing was delivered with a lot more subtlety in the 1959 film, even considering that film's unmistakable allusions to such Cold War themes as loyalty and betrayal. Bekmambetov and Co. have created a redesigned product that is at once inferior to the original and a slavish imitation. This new Ben-Hur could just as easily have been called "Been There, Done That."