The plot, stitched with numerous songs, seems forced and the situations contrived 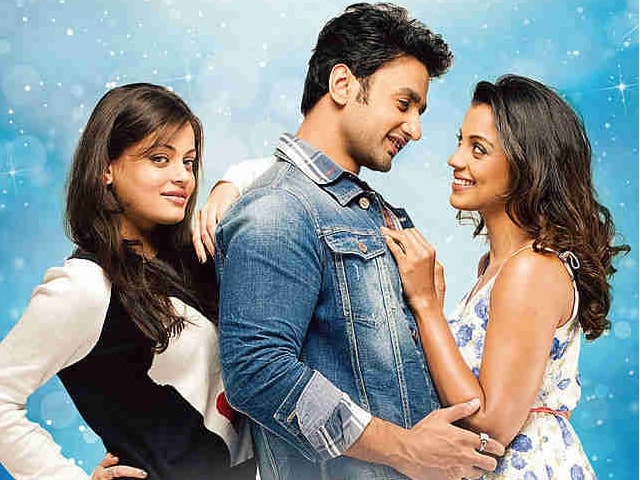 There is nothing new about a love triangle. One has witnessed it a million times and so Bezubaan Ishq lacks novelty and offers nothing spectacular.

This love story revolves around Suhani (Mugdha Godse), an ultra-modern Gujarati girl who addresses her grandmother (Farida Jalal) as 'Cinderella dadi' for being strict. Her life is all about partying, drinking and enjoying herself. She also breaks into bouts of impulsive, aggressive and violent behaviour at the slightest provocation, and it is soon diagnosed as Intermittent Explosive Disorder (IED). Her doctor suggests, "Get her married as love is the only solution for this medical problem."

And seemingly so, her father Rashmikant Patel (Darshan Jariwala) broaches the subject with his best friend and business partner, Vipul Shah (Muni Jha). The families decide to get Suhani married to her childhood friend, Vipul's son, the caring Swaagat (Nishant Malkani).
Though not in love with Suhani, Swaagat agrees to marry her as he feels that, "Suhani should be happy for ever."

For the wedding, Rashmikant's brother, Mansukhbhai (Sachin Khedekar) arrives from London, with his wife and daughter Rumzum (Sneha Ullal).

After the engagement ceremony and before the wedding, the youngsters plan to visit Rajasthan. There, the inevitable happens when Swaagat realises that he is falling in love with Rumzum.
Nishant Malkani has a fairly decent screen presence. He is charming and by far the best of the trio. There is something pleasant and appealing about him. Doe-eyed and with a half-smile, he is endearing as Swaagat.


The girls are a big let-down. Sneha Ullal with her screechy voice makes her presence felt with bouts of drama. Mughda Godse as Suhani, the attention seeking damsel, is a strain on the nerves with her pretentiously boisterous performance. She is not impressive in the least and her histrionics are best not mentioned.

The rest of the characters are two-dimensional and flat, played by many veteran actors. Unfortunately, their presence cannot revive a poor script and a weak film, replete with mediocrity.


The plot, stitched with numerous songs, seems forced and the situations contrived. There is a feeling of deja vu as one has seen these so often. Nevertheless, the music offers some respite as the songs are melodious, well picturised and shuttle between dreams, fantasy and reality. Raju Singh's background score is too overpowering at times.

The costume designers too have taken pains to ensure that the screen is lively and abounds with colours.

With wide angle lenses, cinematographer S Kumar Bhagat's frames capture the picturesque locations of Rajasthan. He has also experimented with some delicate silhouettes that stand out. The visuals help to break the monotony of watching a staid and predictable story unfurl.

Watch Bezubaan Ishq only if you are a die-hard romantic and have nothing better to view.