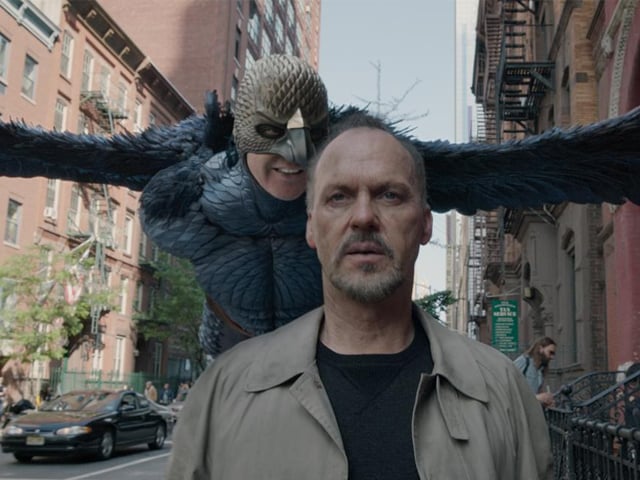 With an alternate title, The Unexpected Virtue of Ignorance, which appears in the movie's opening credits; Birdman is an intense, tantalising and tragic dramedy. It stands out as a unique film that spurs your mental quotient and it has an uncanny resemblance to the premise of the Hindi film, Ankhon Dekhi directed by Rajat Kapoor. Both films are an art house exploration of imperfect people struggling to navigate their lives.

While Ankhon Dekhi is the tale of a quixotic patriarch, Birdman is a tale of a fading superhero Riggan Thomson. Where, Thomson, who attained stardom based on his work in a string of comic book superhero films, Birdman, is fighting his neurosis. The film showcases Riggan's personal demons that include his domestic issues and internal torment.

To revive his sagging image, Riggan Thomson, stages a comeback as a writer, director and actor by mounting a stage production of a Raymond Carver short story, What We Talk About When We Talk About Love, on Broadway.

Set on a stage and between the rehearsals for the play, the narration unfurls bringing to fore Thomson's insecurities and his interpersonal relationships with: his now separated wife Sylvia (Amy Ryan), his daughter Sam (Emma Stone), his friend Jake (Zach Galifianakis) who is also his producer and attorney, his co-star and girlfriend Laura (Andrea Riseborough), Lesley (Naomi Watts) a first time Broadway actress, Mike Shiner (Edward Norton) a method actor and Tabitha Dickson (Lindsay Duncan) a theatre critic.

Michael Keaton fits into Riggan Thomson's boots with passionate grace and ease, meditating, drinking, hallucinating and fighting his way forward. He comes out as a tortured jittery personality. You relate to him. Yet, you don't feel sorry for him when he admits, "I missed the moments." Or, "I wasn't present in my own life." He emotes that realisation and nervous helplessness with panache. And that's what probably works for him in the film.

While all the ladies do their bit to perfection, it is Edward Norton who steals the show as the perky, confident method actor. He goes to extremes with his obsession to bring neo-realism on stage. He is a live-wire and his presence on screen elevates the drama and humour.

Artistically crafted, the film is intellectually challenging and emotionally confronting. The director along with co-writers Nicolas Giacobone Alexander Dinelaris Jr and Armando Bo have designed the plot as a long-drawn anxiety packed nightmare of complex characters. But unfortunately these plot points are superficial and shallow in nature as they don't traverse beyond the developmental stage. These in no way hinder the overall effect of the film or its narration.

The dramatic pace along with cinematographer Emmanuel Lubezki's manipulative camera work gives the appearance that most of the film is one continuous, seamless long take.

What adds to the viewing experience and enhances the psychological effect of the film, is its frenzied background score. Its adrenaline packed leitmotif of the drum score by Antonio Sanchez is effectively used to create and drive home the point of the insanity prevalent in the narration.

Overall, the film is a must watch for its unconventional presentation, style and performances.