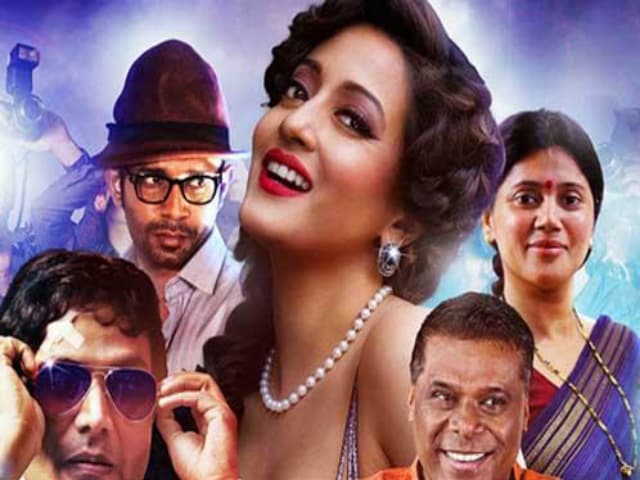 Bollywood Diaries wends its way through territory that Mumbai films have charted before, most notably in Hrishikesh Mukherjee's Guddi.

It, however, takes a circuitous route that instantly pushes it away from the obviously cliched pathways.

First-time director K D Satyam delivers a narrative triptych that is shot through with interesting twists.

For the writer of Rajan Khosa's acclaimed children's film Gattu, Bollywood Diaries is, however, not as marked a departure as it might seem on the surface.

The three individuals that Satyam zeroes in on are, in an important respect, not unlike the protagonist of Gattu, a small-town street kid who wants to send his kite soaring in the sky above all others.

The former was about a small-town man, the latter about a nondescript girl who stakes all for the sake of a shot at movie stardom.

Bollywood Diaries is somewhat different in that it isn't the story of a single individual.

It weaves three separate, unrelated tales into a single narrative tapestry, flitting seamlessly from one to the other to highlight what happens when reverie gets the better of reason.

On the plus side, Bollywood Diaries has a unique texture that blends the firmly commonplace with the overly flighty.

But the three are bound by their all-encompassing passion for Bollywood. They are willing to throw all caution to the wind to get there.

The gauche Rohit is a lad so obsessed with Hindi cinema that he barters away everything for that one elusive break as an actor in a movie.

The problem is that he is more an enthusiastic mimic than a genuine actor. "Intensity hain, but acting is zero," a judge tells him on his face at a Bollywood talent hunt.

Vishnu is the 52-year-old father of a married daughter who, one fine day, announces to his wife (Karuna Pandey) that he has had enough of the drudgery of his 9 to 6 office job.

An actor who was forced by middle class pressures to abandon his dream, he wants to pack his bags and leave for Mumbai to try his luck in films.

An assistant director (Vineet Kumar Singh) arrives at her door to research a film on life in a brothel. She pours her heart out to him. The story in place, the filmmaker promises her the lead role.

All three stories, in the true tradition of a commercial Hindi film, veer into the realm of the extravagant, with the background score gradually rising to a crescendo to underline the growing intensity of the yearning of the individuals to break free from anonymity.

Bollywood Diaries is the least sure-handed in the Sonagachi segment. Imli's brothel is too anodyne to be real and her exchanges with the Bollywood director prepping for his debut film lack depth.

But Raima Sen gives her role the best shot, lending Imli a degree of believability beyond what the screenplay allows her.

The best of the three strands is the one that revolves around Vishnu, thanks to the solid presence of Ashish Vidyarthi as the man desperate to return to the passion of his youth.

But here, too, Satyam resorts to excess, with terminal illness, a holy man (Robin Das) pontificating on unrealised dreams and moksha and a family on edge thrown in for dramatic effect.

The Baazigar-fixated Rohit is by far the craziest of the lot. He inflicts all manner of pain on himself to prove the extent of his madness.

He breaks beer bottles on his head, cuts his wrist with a razor and whips himself, all for the higher purpose of earning a ticket to Bollywood.

Is the dream worth so much blood, especially for a man whose talent is suspect? Owing to his lack of "cinematic presence and acting technique", as Rohit is unequivocally reminded, his is clearly a mission impossible.

Although the film is not without its moments, in the end its labours are somewhat akin to Rohit's ill-advised exertions.

If only the disparate elements were better dovetailed into the larger picture it seeks to paint, Bollywood Diaries might have had more to write home about.

It is disappointing that it doesn't because the premise did have a great deal of promise.