In this game of life-threatening one-upmanship, it takes a friend no time at all to turn into a foe. 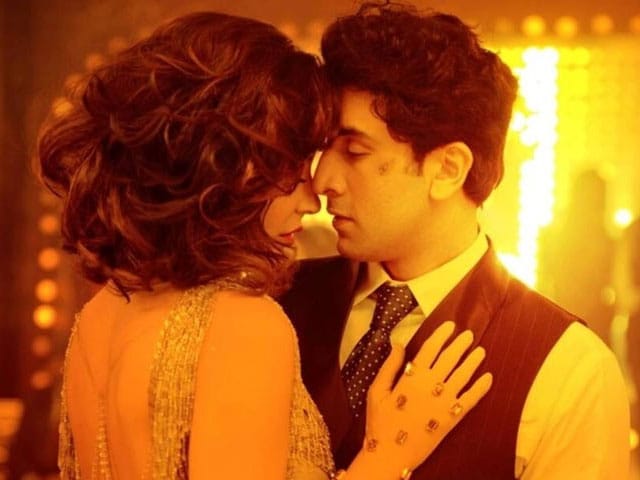 The most striking aspects of Bombay Velvet are its evocative visual texture and its lush and layered sound design.

But these, unfortunately, can only be external accoutrements for an ambitious film that clearly aspires to be infinitely more than the sum of its superficial parts.

Meticulous is indeed the word to describe the way director Anurag Kashyap and his team recreate the eventful past of an urban sprawl that was carved out of seven separate islands and turned into one landmass through multiple reclamations from the sea.

The Bombay Velvet plot is littered with street fights, shootouts and murders on the one hand, and jazz soirees, bitter tabloid wars, fierce political rivalries, deadly depredations of land sharks and labour unrest on the other.

The remarkably redolent period detailing, however, stays largely on the surface. It does not seep into the core of the crime thriller set against the transformation of Bombay into a city of dreams and deep divisions.

All things considered, Bombay Velvet is, at best, a passable story of vaulting ambition, all-consuming love and destructive greed.

A diligently crafted and gripping first half gives way to a dreary second-half account of nattily attired men plotting to defame and destroy each other and take control of all the reclaimed land that is up for grabs.

If Bombay Velvet is trying to tell the audience exactly how Bombay mutated into India?s financial capital, the point does not come through strongly enough for it to become the film?s principal takeaway.

The saga of the city at the heart of Bombay Velvet doesn?t quite offer the panoptic view that the film?s source material ? Princeton University subaltern historian Gyan Prakash?s ?Mumbai Fables? ? managed to do owing to its scholarly sweep and depth.

That drawback obviously stems from the limitations that a two-and-a-half film must necessarily contend with.

The screenwriters (Gyan Prakash, Thani, Vasan Bala and Anurag Kashyap) are constrained to be selective with what they focus on in Bombay Velvet.

As a consequence, the chief protagonist of the film, the city of Bombay, is seen only in random snatches, beautiful but not fully delineated.

The story that overshadows all else in Bombay Velvet is that of Johnny Balraj (Ranbir Kapoor), a street kid who strays into a city in rapid flux two years after Independence and is raised by a Falkland Road sex worker.

By the 1960s, Balraj is a strapping, violence-prone lad ready to take on the world. A wannabe bare-knuckles boxing champ, he dreams of breaking free from his struggles.

With childhood chum and fellow migrant Chimman Chopra (Satyadeep Mishra), a gawky-eyed Balraj watches James Cagney die in the arms of Gladys George in the climax of the classic 1939 gangster film, The Roaring Twenties.

?He used to be a big shot,? the lady says about the lifeless man. That line changes Johnny?s life and he becomes obsessed with the idea of becoming a big shot.

The only other major obsession of Balraj?s life is jazz singer Rosie Noronha (Anushka Sharma), who sings with gusto of the hard knocks that life has subjected her to.

Their passion for each other is intense and defies all norms. The moments that the rebellious twosome shares provide a few of the more electrifying moments of Bombay Velvet.

Balraj gets his big chance of a shot at being a big shot when a failed robbery bid brings him into contact with pushy pro-capitalist media magnate Kaizad Khambatta (Karan Johar).

Balraj quickly earns Khambatta?s trust and is made the manager of his hip nightclub, Bombay Velvet, where Rosie is the star attraction, and where the down-and-dirty collides in unseemly ways with the decorous and dandy.

Cut to the late 1960s: on the back of the Backbay Reclamation come plans to develop a Manhattan-like skyline in Bombay and big money and political avarice join forces to snatch the largest chunks of the lucrative action.

Mistry is no mug and spares no trick in the book to outwit Khambatta and his trusted lieutenant.

In this game of life-threatening one-upmanship, it takes a friend no time at all to turn into a foe.

By the time the myriad manipulations begin to wind down, Bombay Velvet runs out of steam. The last half-hour of the film is devoted to going through the motions to reach a climax that is as grotesque as it is risible.

Ranbir Kapoor gives the pivotal role all he has. He does have a great deal, and is able to invest Johnny Balraj with the moral ambiguities that come with the territory he inhabits.

Anushka, the femme fatale who ends up playing into the hands of the men she ensnares, serves as the ideal foil.

But of Karan Johar as the master manipulator who gives the protagonist a hard time, the less said the better. Acting isn?t his kettle of fish.

One final act in the film by an under-utilised Kay Kay Menon, playing a crime branch detective on the trail of Johnny Balraj, sums up his and the audience?s frustration. He flings his hat into the ground.

It certainly isn?t disgust that you feel at how Bombay Velvet turns out. It is after all a deftly mounted film with much going for it.

What you leave the hall with is a sense of disappointment. Bombay Velvet has neither the softness of velvet nor the sweep of the city it is an ode to.

Unlike its pugilist protagonist, the film punches well below its weight.