For all the hoopla, Brothers, in going for the jugular, punches well below its weight. 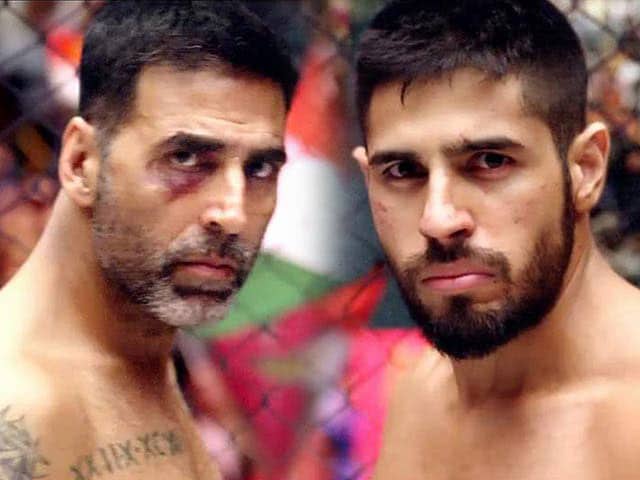 An overblown, ultra-violent melodrama, Brothers spills a lot of blood and breaks plenty of bones on the way to establishing the primacy of fraternal love.

The collateral damage that the film inflicts isn?t confined to the screen alone. Its excesses could drive the more sensitive and discerning of Bollywood pulp lovers off such fare for a spell, if not for good.

Brothers is an official remake of the 2011 Hollywood actioner Warrior. With the predilections of Indian audiences in mind, it tweaks the source storyline in significant ways in a bid to whip up high-pitched emotions and over-the-top drama.

The film has loads of both ? emotion and drama. Yet, it is strangely torpid because ring hollow.

In any case, how edifying and exhilarating can the sight of beefy men pummeling each other be when it is stretched beyond two and a half hours?

The tale revolves around two Mumbai half-brothers, part of a family that once was. Fate brings the two streetfighters head to head in a bloody mixed martial arts contest.

One of them is in the arena for the money that could save his ailing daughter; the other is in the game to redeem his alcoholic father, the man at the root of all their troubles.

As the MMA tournament unfolds along entirely predictable lines, one of the excitable ringside commentators, who is as annoyingly loud as anything else that the film has to offer, hollers that this is ?Mahabharat reloaded?, this is epic?.

Epic indeed, but not quite in the way that would have made the film a tolerable experience.

Brothers aspires to be a high-voltage sports film, but is unable to land its punches on target.

This film is a perfect demonstration of all that is wrong with contemporary Bollywood potboilers. It is marred by poor scripting and unbridled overacting.

Brothers presents the story of forgiveness and redemption purely as a physical confrontation between two estranged brothers who have drifted apart amid tragic circumstances.

Director Karan Malhotra?s heavy-handed approach to the material drains out the emotional power of the original.

He resorts to storytelling methods that bank on the most fetid of clich?s packaged in a style marked by a fondness for the mawkish.

Malhotra continues pretty much in the Agneepath vein, rolling out his thundering scenes like there is no tomorrow, with an earsplitting background score so persistent and so shrill that it deadens the soul.

Brothers also has what must surely be the silliest and most ill-timed item number ever foisted on a film.

A skimpily clad Kareena Kapoor pops up on the screen with Mary Naam Mary at the most inopportune point in the story, just when the younger street fighter, Monty Fernandes (Sidharth Malhotra), begins to find his footing his life, having just knocked out a reputed pugilist with a single blow.

Responding to the exhortation of his sozzled dad to give direction to his anger, Monty seems all set to take on the elder one, David Fernandes (Akshay Kumar), when Mary interrupts the flow.

David is now a much-loved physics teacher who lives away from the din with his wife Jenny (Jacqueline Fernandes) and a little daughter whose weak kidneys are a severe strain on the man?s financial resources.

He has left his bitter past behind, but the memories of his fighting days under the tutelage of his father Garson Fernandes (Jackie Shroff) are still fresh.

His students ask David to show them the tattoos on his torso, but David refrains from baring his stripes.

When he returns to the street fighting ring in Colaba, he loses his job, but not the support of his principal (Kulbhushan Kharbanda) and his enthusiastic pupils.

By the time Deadly David, a wild card entry in the hyped R2F (Right to Fight) tournament, and Manic Monty, whose fury knows no bounds, square off against each other in the ring, it is difficult to stay focused on the crux of the family drama.

In a film like Brothers, the quality of the acting doesn?t matter. What matters is the impact of the action scenes, which have the potential to make and mar of the production.

The pitching of the drama is several notches above acceptable limits and the fight sequences have men mercilessly mauling each other until deep gashes are opened and bones are crunched.

The two protagonists take on opponents from all over the world, including a fearsome German and a Shaolin fighter, and reduce them to pulp.

Sidharth Malhotra?s Monty gets appreciably less footage because he takes next to no time to knock out his rivals.

Akshay Kumar?s character engages in more time-consuming bouts, tiring out his opponents before going in for the kill. The film levaes the audience in no doubt who the bigger star is.

Brothers has the usually effective Shefali Shah in a cameo that ends a blood-splattered mess. In the bargain, she, too, is reduced to an agonizing spectacle.

For all the hoopla, Brothers, in going for the jugular, punches well below its weight.

It makes so much noise that any sensible point about brotherly bonding and filial fidelity that it might be trying to make is completely drowned out by the decibels. Take your earplugs along.