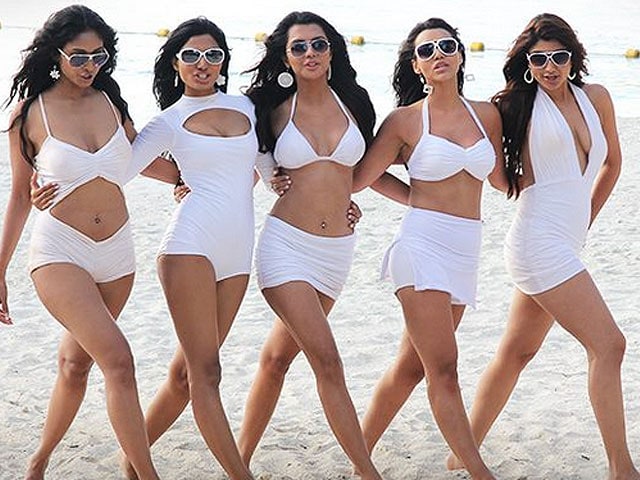 Slapdash and sanctimonious, Calendar Girls is a stunner, but for all the wrong reasons. It is stunning in its sheer stupidity.

One of the girls alluded to in the title, a Lahore lass from London, is quickly reduced in aamchi Mumbai to servicing sex-starved politicians, industrialists and diplomats.

Another, a Hyderabad girl now married to a philandering jetsetter from a wealthy Jodhpur clan, lectures the former on ?third-rate and characterless? escorts who sell their bodies and souls for money.

Cringe-worthy and laughable at once, such moments of pop wisdom are scattered all across the expanse of Calendar Girls.

In a shrill and sketchy prelude, five leggy lasses from around the country hotfoot it to Mumbai to participate in a coveted calendar shoot they believe will change their lives forever. It does. But nothing can reverse the film?s downhill course.

Calendar Girls starts off in the pits and stays there over the next two hours as the models get shortchanged at every turn by men who couldn?t care less and cynical socialites who know exactly how to work the system.

This film marks a new low for the rapidly waning Madhur Bhandarkar. Its portrayal of women, both sinning and sinned against, is smug, condescending and unabashedly exploitative.

The director puts in an onscreen appearance as himself and gets one of his characters, a self-confessed fangirl, to claim that his films are both ?realistic? and ?revelatory.? High hopes. This one is neither.

Having burnt his fingers with the 2012 Kareena Kapoor starrer Heroine, Bhandarkar opts this time around for a bunch of wide-eyed newcomers who, as one of the characters exhorts another to do, go with the flow.

Only, flow simply isn?t the right word here. Calendar Girls has no semblance of pace, movement or rhythm. It beats around the bush without stumbling upon whatever that it is looking for.

The most offensive aspect of the film is its skewed gender politics. Set in a world dominated by sleaze-balls and scumbags, it seems to suggest that girls with ambition are prone to rash behaviour and, therefore, abuse.

On their first night in Mauritius for the calendar shoot, the photographer, Timmy Sen (Rohit Roy), exhorts the models to lighten up. Reveal your ?dark and deep secrets?, he suggests ominously.

And what, pray, does he mean by that? He means the obvious. He follows up the request with the most obnoxious question: ?When did you first feel a man?? Get your vocab and mind into shape, man!

Calendar Girls is only about sex and sleaze presented on the pretext of unravelling the decaying innards of Bollywood and the cricketing world.
It talks incessantly and very loudly about spot-fixers, sex racketeers, cheating husbands, corporate loudmouths and builders seeking a toehold in showbiz but never makes any sense at all.

Calendar Girls presents its five skimpily clad protagonists in a light that is neither convincing nor geared towards garnering genuine empathy for the plight of these lambs to the slaughter.

The poor little not-so-rich girls are exploited far more by the camera than by the glamour industry that Calendar Girls loses no opportunity to malign.
The Pakistani girl, Nazneen Malik (Avani Modi), gets the roughest end of the stick, not the least on account of the clich?s that the film reinforces about her country and its restrictions on women.

The Kolkata girl, Paroma Ghosh (Satarupa Pyne), fares only marginally better. Apart from the minor fact that nobody pronounces her first name right, she is sucked into the cricket underworld by her unscrupulous and overambitious boyfriend.

The others ? Hyderabad?s Nandita Menon (Akanksha Puri), Goa?s Sharon Pinto (Kyra Dutt) and Rohtak?s Mayuri Chauhan (Ruhi Singh) ? survive the onslaught by the skin of their teeth, but not before having to contend with their own share of setbacks and challenges.
Just a stray thought: the bad guys and gals in Calendar Girls are Paroma Ghosh, Pinaki Chatterjee, Anirudh Shroff, Harsh Narang, Ananya Raichand and, of course, Nazneen Malik, cultural outsiders all.

In contrast, the CBI officer who heads operation clean-up and cracks the spot-fixing racket is, sure enough, a certain Mr. Paranjpe, a true-blue Kokanastha Brahmin! Could this be a mere coincidence?

Adman and occasional actor Suhel Seth pops up in a few scenes in the guise of a flashy entrepreneur. His opening line, spoken in a boardroom, sums up the film: Why are you guys behaving like dolts?

Take the cue. Give Calendar Girls a miss.