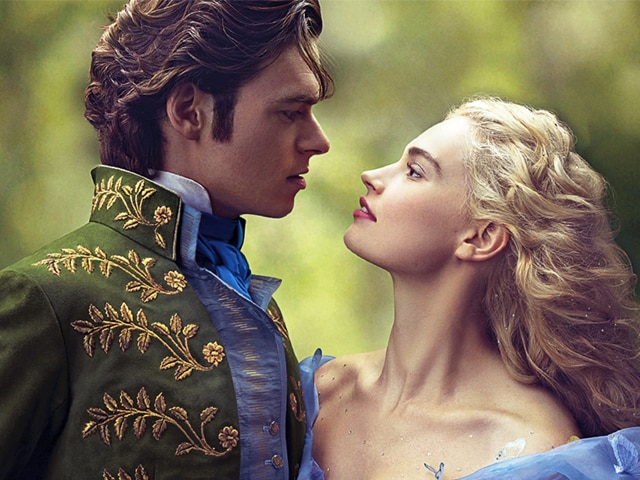 Poor Cinderella - she still can't catch a break. In the 1950 Disney animated musical, her friendly neighborhood mice know the score and give it song: Night and day, it's Cinderelly! 'Make the fire, fix-a breakfast, wash the dishes, do the mopping, and the sweeping and the dusting.' They always keep her hopping! In Disney's latest version, directed by Kenneth Branagh, the mice stick to squeaking and look about as real as most computer-generated rodents. And, fascinatingly, much remains the same, including a fairy tale that opens with clear skies but soon plays the poor-little-girl blues before you-know-who comes along. Maleficent and its revisionism are so last year.

Why Cinderella, why now? If you're the Walt Disney Co. the answer can only be: Why not? She may not be a princess (yet!) and the story may have been told innumerable times, but there's gold in those glass slippers no matter how many miles they have on them. The cinema pioneer Georges Melies told her story in 1899, perhaps for the first time on screen, and she recently popped up in Disney's live-action adaptation of Stephen Sondheim's Into the Woods. Disney has further helped stoke the demand for this new movie with two direct-to-video sequels to its 1950 film, Cinderella II: Dreams Do Come True (2002) and Cinderella III: A Twist in Time (2007).

And here she is again, pretty as a picture, with flowing blond hair, a flashing smile, a fabulous gown - a bewitchingly blue number from the costume wizard Sandy Powell - and that go-good-girl triumphalism. First, though, here's the once upon a time: Cinderella opens in an indeterminate past with long frocks, horse-drawn carriages and no cellphones, in one of those lavish soundstage countries. (The movie was partly shot in the Pinewood Studios in Britain.) There, 10-year-old Ella (Eloise Webb) safely nests in a pocket paradise alongside her homemaker mother (Hayley Atwell) and merchant father (Ben Chaplin), a small menagerie and a clutch of smiling servants. This being a fairy tale, heaven soon gives way to woe so the story can get down to business.

Bruno Bettelheim claimed that Cinderella was the most popular fairy tale, so pardon my spoiler: Ella's mother dies after some discreet coughing, time passes and Lily James takes over the role of the older Ella. A regular on the television series Downton Abbey, James effortlessly holds the big screen, less because of her beauty than the life that both animates and demystifies that beauty, making it seem less other (even a touch aspirational) and her character feel approachable and likable. It's smart casting because that likability and the smiles it solicits help take the edge off Cinderella's victimization and because the minute Ella's father brings home a new wife, James becomes a wee planet in the orbit of a very bright star known as Cate Blanchett - the Stepmother, of course.

In traditional iteration after iteration, the story of Cinderella is also that of mothers - dead, cruel and magical - who loom over this quintessential dutiful daughter far more than any man. One mother abandons Cinderella, leading the way for a second mother to torment her, who in turn opens the door for a third mother to come to the rescue with a wave of her wand. The prince may eventually find and marry Cinderella, but it's a mother who truly saves her. It's a strange matriarchal world, after all, if one still rived with complexities. Here, the screenwriter Chris Weitz adds some dimensionality to the standard conception of the Stepmother (as she's only known), mostly by referencing the dire prospects for a widow with two children and no income of her own.

Less genuinely wicked than seriously mercenary, this Stepmother can't help but steal the show. Blanchett takes some of the credit (or blame), as does the visual design for the character which, from her soignée updos to a leopard-skin dressing gown, suggests a 1940s femme fatale. There certainly is a touch of Joan Crawford's Mildred Pierce to the Stepmother and her sob-worthy back story (as well as her blood-red lipstick and power shoulders). And when Blanchett's pale face emerges from behind a hat, the entrance evokes the likes of Jane Greer "coming out of the sun" in the noir "Out of the Past" so she can destroy Robert Mitchum. Even so, the Stepmother isn't really evil - she just proves, from her smoky eyes to her enviable green frocks, that bad always sizzles more than good.

Blanchett, eyes widening and narrowing, and teeth all but gnashing, plays the role at full Cruella de Vil tilt. It's a divertingly oversize, near-vaudevillian performance ornamented with frozen looks, boogieing brows and rubber-band-like mouth contortions. Branagh's ascension into big-budget studio directing largely remains a mystery, and there's little in Cinderella beyond its faces and gowns that captures the eye or the imagination. His one interesting directorial choice is to fold in different performance styles, which tend to fall into exaggerated, almost-burlesque mode or a more familiar naturalistic expressiveness. This suggests that, at least in the case of the Stepmother (if not her nitwit daughters), cruelty sometimes may be more a mask than a question of being.

You know the rest, bibbidi-bobbidi-boo and all that jazz. Helena Bonham Carter toddles in as the Fairy Godmother and Richard Madden (Game of Thrones) gallops in as the Prince. Mildly charming and orthodontically dazzling, the Prince first sees Ella taking a very unmaidenly bareback horse ride, a scene that conveys that she remains free despite the home-front misery. Try as the filmmakers might to obscure her victimization, there's no getting around that this Cinderella has to do time as the classic persecuted woman even if the Disney imperative means that she must also dust herself off, go to the ball and waltz into a happy ending. As tabloids, reality television, countless novels and sometimes the movies suggest, you cannot keep a good woman down, even if it's fun trying.