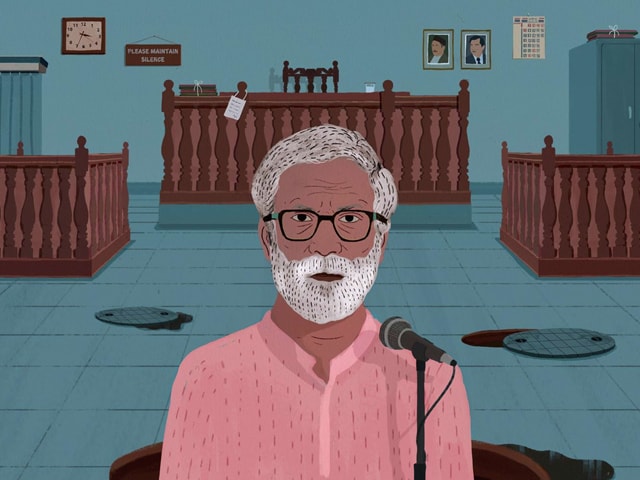 A legal procedural like no other, Court, Chaitanya Tamhane's remarkable debut film, is a hard-hitting narrative rigorously pared down to its bare essentials.

The austere storytelling enhances the searing quality of the film's commentary on a lumbering legal system that is ill equipped, if not altogether disinclined, to serve those outside Indian society's charmed circle.

Court draws most of its power from its understated ire, which reveals itself through the plight of a plucky old poet who runs afoul of some archaic provisions of the penal code.

He finds that there is no escape from the law's vice-like grip once he is deemed to be on the wrong side of it.

Narayan Kamble (played by real-life activist Vira Sathidar), feisty Dalit folk poet, is accused of abetting the suicide of a Mumbai gutter cleaner found dead in the belly of a noxious sewer.

Kamble, who sings of inconvenient truths and exhorts the downtrodden to fight for their rights, is charged with inciting the impoverished municipal worker to take his own life.

Tamhane develops this absurdist plotline into a caustic indictment of how insensitive law enforcement grinds people into submission and a sense of helpless resignation.

Beyond the courtroom drama, the screenplay opens out to reveal the socio-economic landscape and deeply ingrained prejudices that breed skewed notions of sedition and national interest.

The legal battle over whether the manhole death was indeed suicide or only an accident pans out between public prosecutor Nutan (Geetanjali Kulkarni) and defence lawyer Vinay Vora (Vivek Gomber, also the film's producer).

In long scenes that play out before a static and sharp-eyed camera (DOP: Mrinal Desai), we see Nutan mechanically read out laws from a penal code that is over 150 years old.

Vora tries his best to counter the prosecutor's clinical evocation of the legal provisions that Kamble has supposedly violated.

Vora's game efforts to defend his jailed client hit a wall in the form of Judge Sadavarte (Deepak Joshi).

The latter's interest is officiously focused solely on upholding the processes of the law; the spirit of it eludes him completely.

As it does Nutan, a middle class Maharashtrian woman who on the way back from the court picks her son up from school and takes a detour from the rail station to shop for household provisions.

She makes small talk with a suburban train co-passenger and frets over her diabetic husband's tricky diet.

At home, Nutan spends plenty of time in the kitchen, cooking meals for her family of four.

On an evening out, Nutan, husband in tow, watches a Marathi play that berates outsiders who have taken "our jobs and our land, and are now eyeing our daughters".

She is clearly much closer in terms of social station to the former mill worker she is bent upon keeping in jail than Vora is, but she is in no way capable of appreciating the compulsions that drive Kamble's fire-spewing poetry.

Vora, on the other hand, is a well-off Gujarati man who drives a Honda City, loves his cheese and wine, and swigs beer in a swish bar with friends.

Ironically, Vora is the one standing up for Kamble - the lawyer is unyielding in his commitment to saving his client from miscarriage of justice.

Nutan, on her part, has no capacity for any empathy for Kamble's lot and she continues unfeelingly to play her assigned part in sealing the fate of the hapless accused.

When all has been done and dusted, Tamhane's screenplay follows the judge - now in his Bermudas and T-shirt and on the way to a beach resort - into his personal spaces to reveal a gentleman who sees the world only through a thoroughly conservative prism.

Court is openly contemptuous of the narrow-minded and myopic ways in which obsolescent laws are interpreted in this country, but its tone is so even and genteel that its bubbling anger does not take the shape of runaway rage. Restraint renders the blow it delivers infinitely more telling.

Vira Sathidar is an impressive stage performer and watching and hearing him recite his poems on the screen is a memorable experience.

Vivek Gomber and Geetanjali Kulkarni, the two pros in the cast, deliver superb performances to sustain our interest in the dreary court proceedings.

Worthy of special praise is the manner in which the duo merges seamlessly with the amateurs.

The latter are the real faces in the drama, like the dead sewage worker's wife (Usha Bane) and the folk poet's young co-traveller Subodh Khuste (Shishir Pawar).

The multilingual Court (Marathi, Hindi, English and Gujarati, with subtitles) is an exceptional cinematic achievement: a film that no cinema lover can afford to miss.