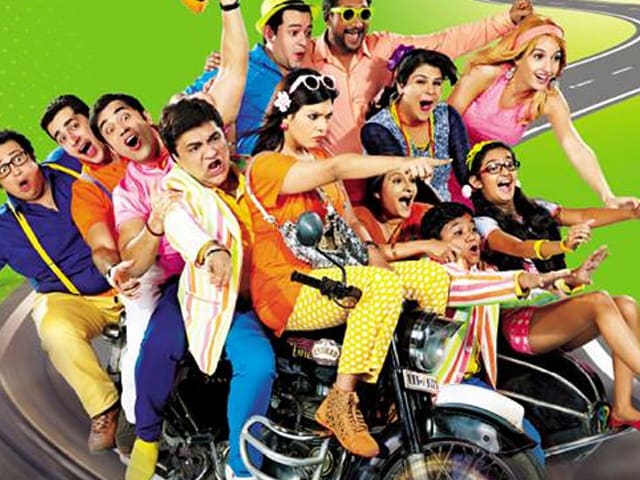 About the only saving grace of Crazy Cukkad Family is its brevity. There is little else in the film that can justify its cocksure airs.

With a runtime of an hour and a quarter, it is relatively short all right. It isn?t, however, half as sweet as it pretends to be.

That, in a nutshell, is the story of Crazy Cukkad Family , an unfunny film that is all over the place as it chases a non-existent rooster.

Why Prakash Jha would have chosen to back this wishy-washy film is beyond comprehension.
You hear a cockerel crow every now and then on the soundtrack and cannot help wondering if a braying donkey would have been more in keeping with the tone of the film.

That is not to suggest that Crazy Cukkad Family is an asinine film. It does have its moments. But the laboured humour and the emotions that underline it get so corny at times that it comes pretty close to flying off the rails.

A comatose patriarch is on his death bed. His four children rush to his villa in the hills hoping to grab a life-altering piece of his sprawling estate, which is so huge that, as an off-screen narrator tells us, it has a pin code of its own.

Needless to say, the siblings are a bunch of dysfunctional oddballs that are completely at odds with any vestiges of family fealty.

The eldest son, Pawan (Swanand Kirkire), is a wastrel who is in desperate need of a huge infusion of quick cash to get a ruthless criminal off his back.

He has a loud and loquacious sister, Archana (Shilpa Shukla), who has missed the Miss India bus and now wants to win the Mrs India crown, come what may.

Another brother, Aman (Kushal Punjabi), jets in from New York, with a new American wife, Amy (Nora Fatehi), in tow.

The youngest, Abhay (Siddharth Sharma), the most mysterious of the lot, returns from New Zealand and finds himself at the receiving end of the wrong sort of attention from a rustic item girl whose claim to fame is a rambunctious song that likens her to a ?sexy pakora?.

Crazy Cukkad Family, on its part, defies categorization. Beginning with a premise that could have yielded a passable dark comedy, debutant director Ritesh Menon (former assistant to cinematographer-filmmaker Santosh Sivan) delivers a slapstick caper that goes around in circles.

It lacks the spry wit and intelligent quirks that might have salvaged its lame plot.

The film?s idea of humour is limited to creating a heap of cringe-worthy clich?s and characters. A secret gay relationship creates a stir in the backwoods, a doormat wife stands by her uncouth husband through thick and thin, and a grossly mistreated hubby slips into drag to settle scores with a harridan.

No to be outdone, a loyal family retainer stands by and watches the fun and an old lawyer holds the dying man?s will in his briefcase while mildly mocking the ?dil ka rishta? on show.

And not to forget, there is that shrill and voluptuous dancing girl who has her wedding rudely scuttled.

Indeed, Crazy Cukkad Family has no dearth of crazy characters, but they simply aren?t zany enough.

Worse, the film?s comedic tenor isn?t sharp enough to help the lightweight tale of four siblings dying to see their wealthy father die leap out of its league.

Crazy Cukkad Family has lyricist Swanand Kirkire in the principal role of a lout out to make a right royal nuisance of himself. He is not bad at all.

And neither is Shilpa Shukla as the woman determined to give the men in her family a run for their money.

But when actors are made to spout lines that add up to naught, they can only tie themselves up in knots.

The narrator whose voice pops up at stray intervals to guide the audience through the mess tells us at the very outset how difficult it is to catch a frisky hen.

But it certainly couldn?t be tougher than making a meaningful comedy, as the makers of this film should have figured out by the end of the exercise.

A wild goose chase is always avoidable, especially when it assumes the form of a full-fledged film.