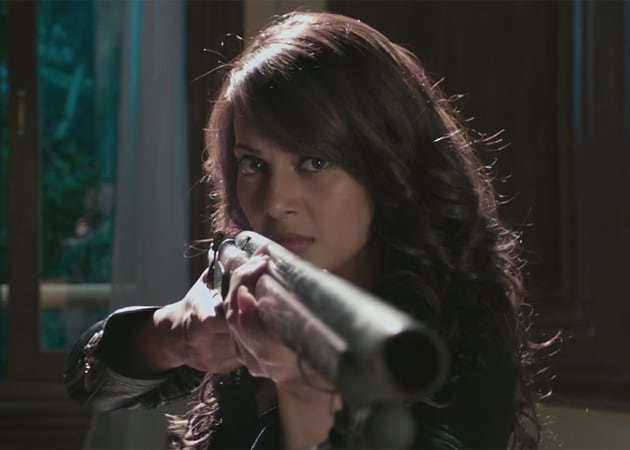 The big fat wicked monster in Creature 3D does have good taste. He attacks our very lovely Bipasha Basu. Nudging us into a rude awakening to a time when monsters, ghouls and other evil forces in Hindi horror films chased the likes of Huma Khan and Asha Sachdev.

Yup, a raga of refinement runs in the new-age terror flicks specially those directed by Vikram Bhatt. He sure knows his monster primer. More than the fear component, which is ample here, what I appreciated in Creature 3D was its honest intentions.

Bipasha plays a holiday-resort owner in a scenic sanctuary whose clients have more to complain about than room service. The monster is a menace that won't be shooed away. She knows she is up against an adversary who can knock the socks off King Kong. Well, in theory at least.

Blame it on the 'Puranas'. But the monster that attacks the very attractive Bipasha on Bhatt's new scare-fest is inspired by our mythology, which says evil is inevitable in a world that craves for perfection. And perfection, as we all know is not a tenable target in our life or in our cinema.

Creature 3D moves confidently enough through its expected motions of fear and horror. The love breaks are annoyingly intrusive. Pakistani star Imran Abbas is as decorative to the goings-on as the leading ladies used to be in Amitabh Bachchan's action era in the 1980s.

Though Bipasha succeeds in making him look comfortable in their love scenes together, the script I am afraid, doesn't share the same comfort level with Imran's character.

Bipasha shoulders the film's heroic requirements with ample aplomb. She gets terrific support from the cinematography by veteran Pravin Bhatt, which makes her look vital, vulnerable and yet in control of the crisis.

The peripheral characters needed to be better fleshed out though. The talented Mukul Dev could have done a lot more for the plot.

The scenes featuring the monster on the rampage are scary. The sound design and the 3D effects complement the storytelling to the extent that there is no contradiction between the film's intentions and the audiences' expectations. This is the third time around for the supernatural combo of Vikram Bhatt and Bipasha.

Creature 3D is scarier than Raaz and Raaz 3. If you like your scares to be anything but scarce this is just what the doctor ordered; unless you're weak-hearted.