Daawat-e-Ishq might not be the grand feast that it promises to be, but some its flavours are alluring enough for the film to be a reasonably appetizing one-time watch 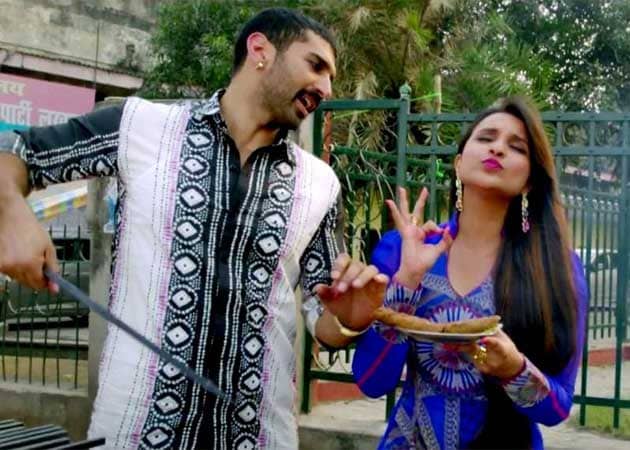 More masala-heavy bhelpuri than saffron-tinged biryani, Daawat-e-Ishq is a smorgasbord of conflicting genres that do not mix particularly well.

The film kicks off in the manner of a social drama, turns into a mild crime caper, then takes on the dimensions of a culture clash comedy, and finally winds up like a love story with a happy ending.

Multiple and not always completely logical narrative swerves all unleashed in the course of a runtime of two hours can only open up gaping holes in the plot that are difficult to plug.

Good food and youthful amour do work well in tandem, but the principal trouble with Daawat-e-Ishq is that allows the two ingredients to recede to the background all too often in pursuit of larger issues of life.

But notwithstanding its share of false garnishing, Daawat-e-Ishq, written and directed by Habib Faisal, is not a soulless film. In fact, it has its heart in the right place.

This is Yash Raj Films? second foray into social issue terrain within a month (after Mardaani).

It delivers a statement about the scourge of dowry that, despite being sweeping and heavy-handed, is not without relevance.

Daawat-e-Ishq is the story of an ambitious and feisty Hyderabad footwear salesgirl who turns the tables on dowry-seekers by pulling a fast one on Lucknow?s best biryani-maker and literally giving him a run for his money.

The film opens on the terrace of the girl?s modest middle class home in the Charminar area of Hyderabad.

A prospective groom has clocked in with his parents to check her out. Her ageing dad is all ears. But the girl summarily and quickly scuttles the match-making attempt.

She has no patience for either the parents? demand for dowry or the CV-fudging suitor who mispronounces both ?blue? and ?film? after having claimed that he is a proficient English speaker.

Parineeti Chopra sparkles during this tone-setting sequence, and that is the vein that she carries on in all through the rest of Daawat-e-Ishq.

The film is never less than watchable primarily because the always dependable actress puts her best foot forward.

She nails the Hyderabadi accent to near-perfection and captures the character?s many interesting layers that reveal themselves as the film progresses.

If only the screenplay hadn?t been quite as convoluted and the heroine?s changes of heart so frequent and inexplicable, Daawat-e-Ishq would have been a far smoother ride.

Parineeti is Gulrez Qader, a girl who nurtures the dream of training as a shoe designer in the US.

Her humble and upright high court clerk-father (Anupam Kher) does not have the means to fund her plans.

The money that the old man has saved up diligently over the years for his only daughter?s marriage simply isn?t enough to satiate the greed of the families that knock on his door.

Not that the Old Hyderabad girl is interested in the least bit in getting hitched to a man who needs her father?s ?help? to set himself up in life.
When the Jubilee Hills city slicker she loves, Amjad (big screen debutant Karan Wahi), turns out to be just another greedy oaf, Gulrez hatches a daring plot to get her own back.

To execute her plan, Gulrez on a random impulse travels with her dad all the way to Lucknow, where Tariq Haidar (Aditya Roy Kapoor), who owns a popular hundred-year-old kabab joint, walks into her well-laid trap.

But Tariq?s culinary skills are so impressive that Gulrez is floored and something akin to love begins to blossom.

The two have nothing in common. Gulrez is an English-speaking MBA. Tariq is a high school dropout who is good only at rustling up the greatest biryani in town.

Yet she agrees to spend three days with him so that the twosome can get to know each other before they exchange nuptial vows.

Daawat-e-Ishq tosses and turns its way through a series of facile twists as complications triggered by Gulrez?s outrageous playacting get worse with each move she makes.

All this makes sense only up to a point. But thanks to the likeable lead pair, the good-natured banter between them and the eventual intent of the film prevent Daawat-e-Ishq from slipping into total futility.

It might not be the grand feast that it promises to be, but some its flavours are alluring enough for the film to be a reasonably appetizing one-time watch.