Deadpool may not be the first Marvel character for grown-ups. But this "merc with a mouth" 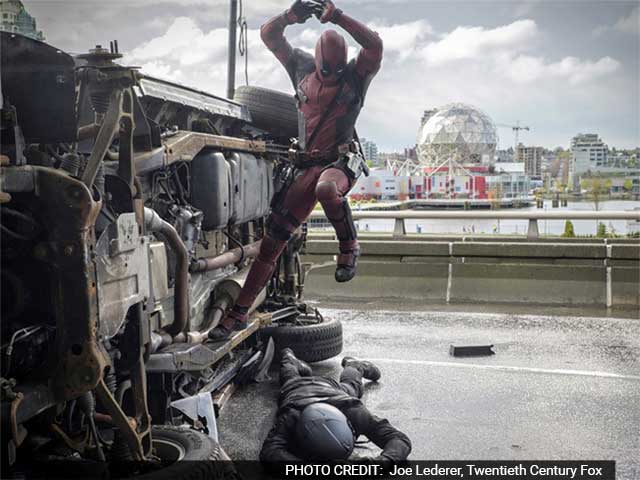 Blatantly, buoyantly vulgar and jam-packed with conspicuously perverse, often bloody violence - including a scene in which the titular protagonist, while handcuffed and suffering from a bullet wound in the seat of his red Spandex pants, saws off his own hand with a Japanese katana - the film has been touted as Marvel's first R-rated comic-book movie.

That's not entirely accurate. While the wildly popular X-Men and Avengers franchises - including Iron Man, Thor and other feeder films - have never strayed beyond PG-13 territory, some Marvel adaptations occasionally have, such as The Punisher and Blade.

Deadpool, however, takes itself far less seriously than either of those films (and includes a snarky little dig at Blade II). Beyond that, there are a jillion other quippy, self-referential jokes about comics and pop culture, including the silly names for Ikea furniture; David Beckham's surprisingly high-pitched voice; and a scatological allusion to Meredith Baxter.

These and other zingers fly by fast and frequently. To put it in terms that Deadpool might, the script reads like The Simpsons had sex with American Dad, but before the censor got there. For the record, it's written by Rhett Reese and Paul Wernick ("Zombieland"). Although the opening credits mention no names - including theirs - star Ryan Reynolds is listed as "God's perfect idiot"; first-time feature director Tim Miller is described as "an overpaid tool." The writers are referred to as "the real heroes here."

Based on a Marvel character introduced in 1991, Deadpool is the origin story of mercenary Wade Wilson, aka Deadpool - or as he puts it, "a bad guy who gets paid to (expletive) up worse guys." After he receives a cancer diagnosis, Wade (Reynolds) is cured via a treatment that leaves him physically disfigured - hence the head-to-toe suit - but with his own latent mutations unleashed, leaving him with superhuman agility and the ability to heal rapidly. That bullet wound? It's quickly gone, even as a fresh hand starts sprouting from his stump, like an amputated frog leg.

One very funny scene features Wade stroking, with his tiny baby hand, the face of his blind, former cocaine-addict roommate, played by Leslie Uggams. It's just one of many demented asides that do nothing whatsoever to advance the plot, but are essential to the film's sense of cracked, antisocial enjoyment. In a running gag, two obscure X-Men - the gothy Negasonic Teenage Warhead (Brianna Hildebrand) and the metallic hulk named Colossus (Stefan Kapicic) - keep trying to recruit Deadpool to their crime-fighting enterprise, before realizing it's a lost cause.

As much of an embittered antihero as Wade is, he's also hugely likable, if not entirely "good." That's because of Reynolds, who brings to his character a charmingly sarcastic verve that's more tart than completely sour. If the actor was miscast in Green Lantern - and the Deadpool script is certainly not the first to admit that he was, lobbing several well-earned insults in the direction of that 2011 film - he's pretty perfect here. Like Deadpool, who's not afraid to kiss a guy, Reynolds exudes a pansexual appeal, at once hyper-masculine and ever so slightly homoerotic.

The forward momentum of the film is fueled by Wade/Deadpool's attempt to exact revenge on the man who left him deformed (Ed Skrein), and who has kidnapped Wade's prostitute girlfriend (Morena Baccarin). But that's just the plot. Despite loads of eye-poppingly well-shot fight choreography, "Deadpool" is only 10 percent action. The other 90 percent? Attitude. It has it out the wazoo, to use a word that Wade never would.

At one point, he calls this movie a love story; at another, a horror movie. (There is a lot of direct-camera address, a hallmark of the character.) In truth, it's a voraciously self-aware comedy, one that dines out on the inherent inanity of its own premise as much as it does the movies it's competing with.

Deadpool may not be the first Marvel character for grown-ups. But this "merc with a mouth," as he's known, feels like the first one with real teeth. I'll wager he's got legs, too. The fast-talking, funny and filthy superhero "sounds like a (expletive) franchise," to use his own words. As with nearly everything else that comes out of the character's mouth, it's hard to argue.