If you like stories about boys on a rampage, this one will make your heart swell with manly pride. 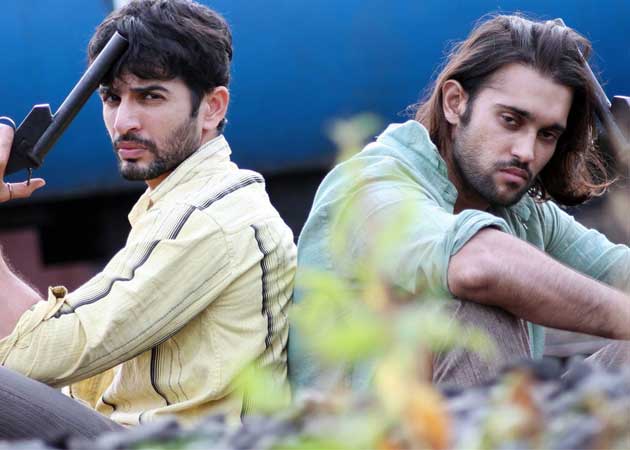 Two child actors, both performing very badly, grow up to be adult actors, one of whom turns out as a decent actor. As for the other, a crash course in basic emoting is recommended.

To find out which one of the two protagonists in this extended gaatha (saga) of guns, guts and some glory redeems himself, you need to see Desi Kattey, a surprisingly watchable, though at times stretched out beyond belief, yarn yoking crime and sports in a way that we haven't seen in any film.

To give you a plot heads-up, here's what this well-written script tells you. Two boys who grow up in the badlands of Uttar Pradesh (Kanpur, we are told) wielding guns as though there is no antidote to lawlessness anywhere nearby, soon decide to go their separate ways, like all filmy friends.

Interestingly, what separates them is not violence, but the way the gun is used. While Pali (Akhil Kapur) uses it for a life of extended crime the other gentler shooter Gyani(Jay Bhanushali) is weaned away from a life of bloodshed by an ex-armyman, played with a quiet strength by Suniel Shetty. He is simply known as 'Major' throughout the film.

Major has a minor problem, an annoying kid-sister played by Sasha Agha, who already proved in Aurangzeb that she can't act. She tries hard here, trying to make her presence felt in a script that has no room for female characters.

There are only two female characters in the entire film (not counting the item song by a foreigner, who sings with punning delight Main patne wali hoon). And that suits the movie's macho motivations just fine.

Desi Kattey is the sort of hurling, heaving, lurching and lumbering homage to rustic heroics that went out of fashion in the 1970s. And that's precisely why it holds your interest. It digs out the old convention of jigri friends turned trigger-happy opponents and then takes the formula to another level altogether by keeping the emotional dynamics on an ambivalent level.

There is a lot that is seriously wrong with this film. But the narrative constantly redeems itself by playing against the rules of cliched cinema.

Director Anand Kumar builds the male bonding between the two buddies with tear-resistant material. Sure, Pali and Gyan, the two sharp-shooters who can aim at the hips and keep it a secret from their lips, hug and embrace and express more affection for one another than couples who have just discovered a shelf full of Archie comics.

But there is core of candour to the proceedings that makes the aberrations (hammy acting by many) bearable. While some of the actors behave as though their facial muscles do not listen to their mental faculties, Suniel and Ashutosh Rana skilfully play down their characters' pitch to an octave much lower than prescribed by the hyper-ventilating plot.

Jay as the shooter who goes from crime to national championship shows growth as an actor.

Earthy, robust and virile, Desi Kattey is the macho 'gun gaan' that fans of Anurag Kashyap and Sanjay Gupta's cinema would identify with. If you like stories about boys on a rampage, this one will make your heart swell with manly pride.