It is easy to rate Dharam Sankat Mein: one star for intention, but only half for execution. 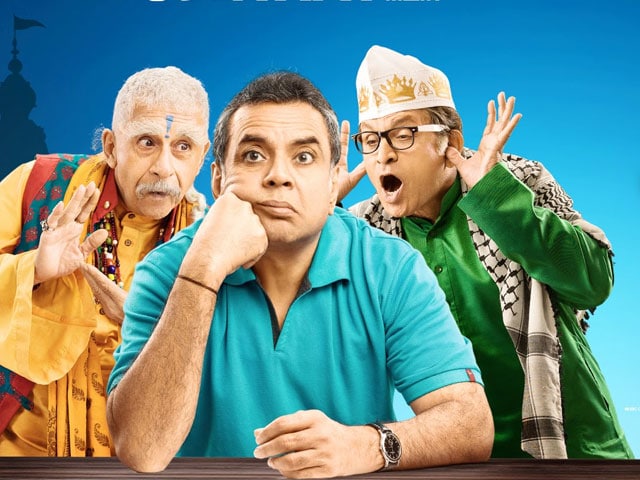 The plight of a man forced by circumstances to owe allegiance to two religious faiths could have been wonderful grist to a sly social satire. Unfortunately, the unique premise is wholly wasted here: all it yields is a tepid film that is neither particularly insightful nor consistently funny.

The crisis at the heart of the plot of Dharam Sankat Mein extends well beyond the conflict that the protagonist confronts. It quickly engulfs the film as a whole as it beats about the bush and barely gets its act together.

Cinematographer-turned-director Fuwad Khan fails to decide whether his well-meaning story should tilt towards all-out emotional drama or hurtle down the path of outright wit and humour.

Paresh Rawal, who played a similar role in the markedly more expressive Oh My God, dons the garb of an Ahmedabad-based businessman, Dharampal Trivedi, who is not particularly religious-minded but is openly prejudiced towards Muslims.

After the death of his mother, the 50-year-old discovers that he was actually born a Muslim but brought up by Hindu parents.

Dharampal also learns that his biological father is alive but ailing. He goes to the home for the aged to meet the old man only to be told by the presiding maulvi (Murli Sharma) that he can do so only if he acquires all the trappings of a devout Muslim.

So the man gets down to the task of grasping the tenets of Islam and mastering the nuances of Urdu diction with the help of lawyer Nazim Ali Mahmoud Ali Shah (Annu Kapoor), his Muslim neighbour.

Dharampal?s dilemma is doubled because his son is in love with a girl whose parents are staunch followers of an eccentric Hindu godman with a penchant for the pleasures of the flesh, Neelanand Swami (Naseeruddin Shah).

Dharampal lands in a serious quandary: he cannot abandon his Hindu identity altogether even as he desperately seeks to turn into a practicing Muslim.

He continues to chant shlokas from the Bhagvad Gita and verses from the Quran with equal fervour: a situation that is mined for laughs with quickly diminishing returns.
It is obvious that what Dharam Sankat Mein is trying to say is perfectly rational, and even necessary, but how it chooses to say it is overly hackneyed.

The film is irretrievably marred by a patchy screenplay that flits aimlessly from one issue to another without quite articulating any of its pet peeves with the required clarity and force.

In the bargain, Dharam Sankat Mein ends up making a hash of the simple point that it wants to put forth: self-styled custodians of religion are frauds and therefore should not be trusted; humanity is all that matters.

The film has actors who have often risen above sloppy scripts in the past without breaking into a sweat. This time around, there is no hope of these proven pros pulling off a miraculous salvage operation.

Rawal is firmly stuck in a strictly ?been-there-done-that? zone where he seems to be merely going through the motions.

He is like a seasoned boxer punching away at thin air and making a sorry spectacle of himself.

This story of a man who is biologically Muslim and socially Hindu is pathologically inclined towards the stale and stilted.

Even the funny lines, which in any case are too few and far between, fall flat because Rawal is compelled to act only from memory.

Naseeruddin Shah and Annu Kapoor fare even worse, reduced as the duo is into unedifying hams.

One cannot but wonder why Naseeruddin has to overact to such an extent unless the aim of the director is to take digs at a particular ?rock star? preacher who recently foisted an entire feature film about his many-splendoured abilities upon us?

Dharam Sankat Mein, an official remake of the 2010 British comedy The Infidel, is certainly not half as horrid as the aforementioned monstrosity. But it is not in the OMG league either although that is quite clearly where it aspires to be.

On one count at least, this film should pose no sankat to anybody. It is easy to rate Dharam Sankat Mein: one star for intention, but only half for execution.