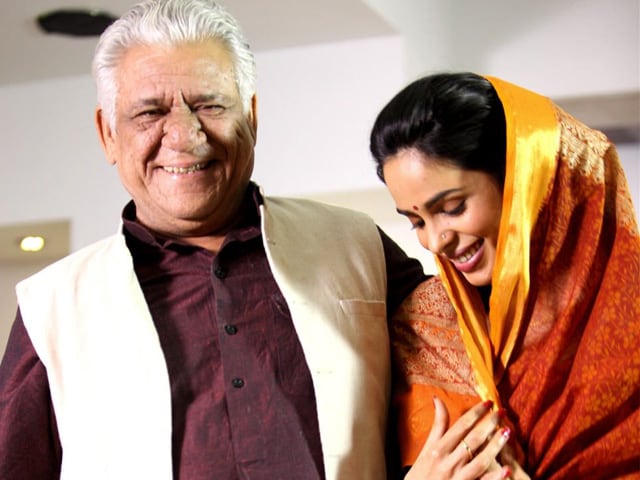 We know what it does to many of our smug and glib leaders. But politics also seems to bring the very worst out of some Bollywood filmmakers.

Here is another maddeningly muddled Mumbai movie that sets out to lay bare the filth and sleaze that Indian politics is usually associated with in the popular imagination but only manages to whip up bushels of cinematic muck.
Dirty Politics is, from end to end, a messy affair that reeks of all-round mediocrity despite the presence in the cast of actors of the calibre of Om Puri and Naseeruddin Shah.

What on earth are these guys doing in such a horrid concoction, anyways?

If politics is indeed serious business, there is no way of figuring that out in Dirty Politics, written and directed by KC Bokadia, a man who has clearly seen much better days as a movie merchant.

In his latest film ? it really is an apology of a film ? Bokadia forks out nothing at all that could suggest that the producer-director has any understanding of how matters actually pan out in real-life corridors of power.

In this rough take on the sordid underbelly of Indian politics, he comes up with a grossly blinkered view that is rendered infinitely more skewed by his inability to break free from stale narrative tropes.

Dirty Politics is not only haphazardly conceived it is also shoddily shot and presented in the immutable mould of a 1990s-style masala movie in which hamming stands in for acting and inanities are passed off as dialogues, complete with cusswords.

The film serves up a mash-up of sex, subterfuge and stupidity that banks upon the ?talent? of Mallika Sherawat to cut through the chaotic clutter.

And that, needless to say, is a recipe for unmitigated disaster. Even in the steamy item numbers, generally regarded as Sherawat?s forte, she is well below par.

The glossy ghagras, the tinkling ghungroos, and the generous skin show are poor substitutes for lack of substance.

Sherawat is shown up in every frame by her co-actors ? among them are the likes of Rajpal Yadav and Ashutosh Rana ? who, even at half tilt, are streets ahead of her.

The film places far too much on the actress? plate. Sadly, it is a thin plate that is riddled with as many holes as the unimaginative screenplay.
It is not as if Sherawat does not do her job in right earnest. But the steamy sizzle that she cranks up occasionally is drowned out by the fetid hot air that Dirty Politics wallows in.

Sherawat, seen on the big screen after a long hiatus, is dreadfully rusty as an ambitious danseuse, Anokhi Devi, who seeks to use an ageing and pot-bellied but libidinous politician Dinanath (Om Puri) as a stepping stone to electoral success.

When the paunchy old fox reneges on his promise to propel the raunchy vixen into the political sphere, the lady scorned springs a sex CD on him and threatens to ruin his public life.

Around this creepy duo is an array of equally weird characters that range from the self-righteously upright (investigative journos and single-minded sleuths) to the utterly unctuous (self-serving political hatchet men and runaway perverts).

The proceedings turn increasingly contrived as the political thriller assumes the guise of a murder mystery.

Anokhi Devi goes missing and the law enforcers, led by the CBI chief (Anupam Kher), take an inordinate amount of time to crack a case whose details stare the audience from the very outset.

But why must one care? Not a split-second of this wasted effort would be worth anybody?s while.

In other words, Dirty Politics is just plain bad. Give it a miss and put your Holi weekend to holier use.