Dolly Ki Doli could have done with a little more energy and clarity. 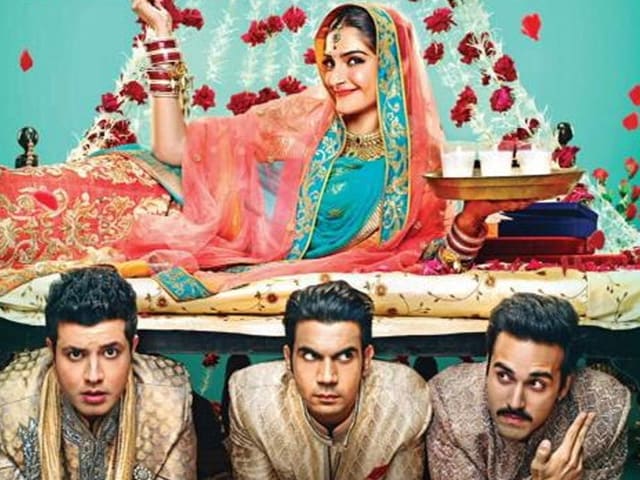 The film, driven by a wildly whimsical plot, gives lead actress Sonam Kapoor a breezy, if insubstantial, role that allows her to stay well within her comfort zone.

She plays a rebel who revels in flaunting bridal attire from across the length and breadth of India - all in a day's work.

Overall, too, barring the avoidable item number designed specifically for co-producer Malaika Arora Khan and the other song and dance set pieces, the film is genuinely and refreshingly non-formulaic.

Dolly Ki Doli, produced by actor Arbaaz Khan and directed by debutant Abhishek Dogra, has no hero, no heroine, no villain and negligible star power.

What it does have is a quirky story that revolves around a gang of thieves led by a pretty woman who resorts to an unusual stratagem to rob her unsuspecting victims.

The protagonist (Sonam Kapoor) is a serial bride who ensnares men, weds them for a day and, on the night of the wedding, sedates the groom and his family with laced milk, cleans out their homes and flees with the booty.

Dolly Ki Doli has ample scope to give short shrift to the usual romantic comedy tropes, and that is an advantage that stands the film in good stead at times.
However, the plot is far too thin for the film's feminist tract, whether it is intended or unwitting, to acquire meaningful and coherent dimensions.

Reminiscent of the 1974 Bengali film Thagini, starring Sandhya Roy and directed by Tarun Majumdar, Dolly Ki Doli lacks the spine of social relevance that the older title had.

Delhi girl Dolly has a fake family, including an Alzheimer's-afflicted granny. Her sham brother (Mohd Zeeshan Ayub) zeroes in on potential sitting ducks and sizes them up before letting Dolly loose on them.

Although in the course of a three-minute song early in the film, we see the lady go through a series of wedding routines, it is on just three men on whom the focus of attention is.

First up is a garrulous Haryanvi lad Sonu Sherawat (Rajkummar Rao), who is so besotted by Dolly that he is ready to revolt against his father (Rajesh Sharma) to marry her.

They miss the mark the first time around as the boy's domineering mom (Archana Puran Singh) plays spoilsport.

Mightily offended at being rejected, Dolly decides to teach the cantankerous woman a lesson and goes back to work on her laadla, and reduces him to a quaking lump of jelly in next to no time.

And finally, a cocky man in khaki from the Lajpat Nagar police station, Robin Singh (Pulkit Samrat), is deployed to track down the runaway bride and bring her to book.

By the time Dolly Ki Doli gets to the halfway mark, it falls into a dull rut.

It is only in the last quarter that the film perks up a bit on the back of a few twists and turns - one of them features Saif Ali Khan in a special appearance - and a 'shock' climax in which a photograph of Salman Khan inevitably pops up.

Quirky as the premise of the film is and blowy as some of its parts are, Dolly Ki Doli does not quite deliver the expected comic delights.

It raises a few laughs here, and some mild chuckles there, but the humour that runs through the story like a thread never assumes spectacular proportions.

The film has an undercooked look and feel. Although its running time is well under two hours, the plot seems to run out of breath at crucial points.

Yet, thanks to Sonam Kapoor's characteristically uncomplicated approach to the job of fleshing out an atypical protagonist, Dolly Ki Doli is sprightly film that could have done with a little more energy and clarity.

Dolly is a rebel all right, but the precise motivations for her battle against the established social order never emerge with clarity.

As a result, the character remains a blurry blob as she takes one man after another for a ride.

When the writing can keep pace with them, the actors do a fairly good job. But that sadly isn't often enough for the film to be able to soar above its modest ambitions.

But for all its obvious flaws and failings, Dolly Ki Doli is not completely unworthy of the 100 minutes that it demands from the audience.