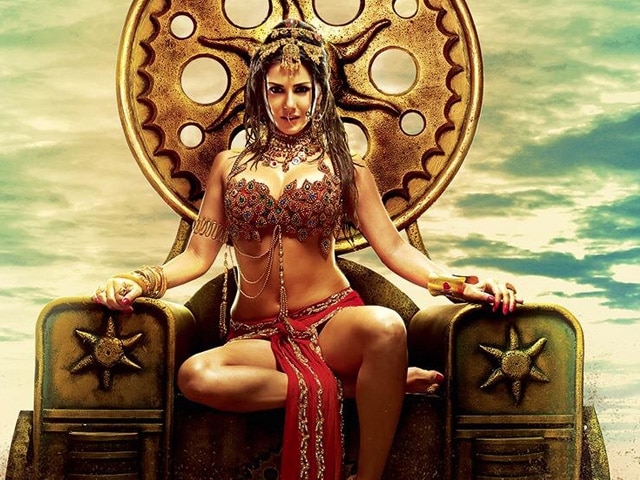 It will leave you wracking your brains because the makers, banking on basic instinct, have brazenly decided that they don't need any intelligence in order to craft a film.

The painfully pointless Ek Paheli Leela is a full-blown cinematic conundrum whose depth is inversely proportional to the geneorus decolletage that is on show.

With Leone on the prowl, what do you expect? She is surrounded by a battery of males who lust for her without making any bones about it.

Needless to say, the character the lead actress plays revels in the attention she attracts. She expresses her joy in robust song and dance aimed at turning up the heat.

He, however, does not get too far because he hangs the flimsy exercise on a silly reincarnation tale that moves between the present and all of 300 years ago.

Leone's skimpy outfits change from one era to the other. But whether it is the bright lights of London or the scorching heat of the Rajasthan desert, nothing can deflect the lady from pursuing her one-point agenda.

The in-your-face act of seduction continues unabated until it becomes as monotonous as the barren desert expanse that provides the principal backdrop.

The present-day heroine is a supermodel - Meera from Milan alias Manjeet Kaur from Mohali.

She has problems that are much more alarming than the fact that her anatomical assets are in constant danger of bursting out of her clothes.

Meera suffers from a mortal fear of flying - she is a survivor of a plane crash in which her parents perished.

She is also on anti-depressants so as not to fall prey to a fatal panic attack.

But she isn't the only one at the receiving end. Her sense of humour is as spectacularly depressing as her awful Hindi diction. Grin and breat it!

When a friend pays her short dress a compliment, she retorts with: "In the glamour industry, short skirts are short cuts to the top." You immediately figure out that there is serious trouble up ahead.

Poor little Meera is tricked into boarding a flight to Jodhpur by a photographer-friend, Radhika "Rads" Randhawa (Shivani Tanksale) and a model coordinator Andy (Bigg Boss housemate Andy) so that they can go ahead with a planned desert shoot.

Cut to the shutterbug's Mumbai-based musician-cousin, Karan (Jay Bhanushali), and an old song that he has stumbled upon.

Every time he hears the ditty, he flips his lid. In a nightmare, he sees himself being mercilessly whipped.

Enter a greybeard guruji who tells Karan that he has been reborn to complete a love story that died prematurely in Rajasthan three centuries ago.

A girl named Leela, the young man is told, holds the key to unravelling the tragedy of his past life. He must find her come what may.

But this is only the tip of the iceberg. If one survives the ordeal up until this point, there is much more bewildering mumbo-jumbo in store.

The scantily clad Leela (Sunny Leone again) romps around on the sand dunes with a handsome but impoverished sculptor Shravan (Rajneesh Duggal).

This hunk is an understudy to Bhairav (Rahul Dev), a master engraver who is also the lord of the desert.

Leela catches the master's fancy and he decides to create a timeless statue of hers with indestructible stone. She is caught in two minds.

That is the vein in which this vapid yarn about love, desire and obsession unfolds against good-looking backgrounds, competently filmed by cinematographer Bashalal Syed.

But the pretty frames and the buxom female protagonist work at cross-purposes. They come in each other's way.

What you choose to focus on - the sexy siren who apes everybody from Zeenat Aman to Aishwarya Rai or the visual compositions that caress the natural beauty of the locales - will determine what impact Ek Paheli Leela will have on you.

Feel free to have your pick. But to be honest, spare yourself the trouble. Ek Paheli Leela is simply not worth it.