Finding Dory is no 'Nemo,' but it'll do 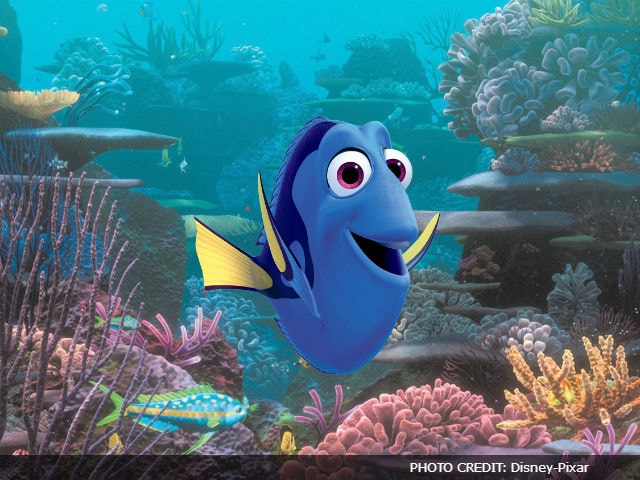 There's something perfectly on point about Finding Dory, the pantingly anticipated sequel to Pixar's 2003 masterwork Finding Nemo, taking 13 years to reach the screen. It stands to reason that the story of the absent-minded fish - voiced by Ellen DeGeneres in both films - would take its own sweet time finding its way to audiences, because Dory herself has a tendency to meander hither and thither, her short-term memory challenges sending her on all manner of digressions, doglegs and unexpected adventures.


That sense of random chance served her well in Finding Nemo, especially juxtaposed with the far more anxious, anally retentive Marlin (Albert Brooks). In this iteration, however, the act begins to wear thin, as our fishy heroine seeks out the parents she was separated from as a child, on a trek that feels both like a retread of the earlier film and, inevitably, less novel and surprising.

There's no denying that Dory is still a delightful creature, with a heart as big as a horseshoe crab. After a heartbreaking flashback to her earlier trauma (reminiscent of the dire opening sequence of Finding Nemo), the film finds her happily ensconced with Marlin and Nemo, who have become her surrogate family.


Still, she pines for the parents she left behind and sets off for the place she vaguely remembers she came from, which turns out to be a marine life museum in California. After a perfunctory swim across the Pacific, during which Dory and Marlin meet up with at least one friend from their previous epic trek, they land at the Marine Life Institute, where the dulcet tones of Sigourney Weaver introduce human visitors to the wonders of the deep, and where Dory makes a series of friends who will help her reunite with her personal blue tang clan.

The most amusing of her new acquaintances is Hank (Ed O'Neill), a cranky, Lou Grant-like octopus who longs to sidestep the lab's policy of "rescue, rehabilitation and release" and stay there forever. Slurping, sliding and bouncing from one watery exhibit to another, Dory and Hank revisit the odd-couple chemistry of Finding Nemo, while Marlin and Nemo, having been separated from their ditzy friend, attempt a rendezvous by way of a pair of solicitous, Cockney-accented sea lions and a scruffy loon named Becky.


Although the relatively dreary setting of Finding Dory results in visuals that aren't nearly as eye-popping as the original film, and the story can't be called inspired, the characterizations and set pieces have been conceived and executed with enough of Pixar's signature care and imagination that audiences, especially young ones, will be entertained.


The voice work from DeGeneres, Brooks, O'Neill and supporting players Weaver, Ty Burrell, Diane Keaton, Eugene Levy and Idris Elba is expressive and funny. And, as in the previous film, "Finding Dory" makes some pointed, if oblique, points about the grabby, intrusive thoughtlessness of lumbering humans interacting with the natural world - here, in the form of a "touch pool" in which exploring hands and fingers are perceived by the frightened marine life as incoming carpet bombs.

If a bit involving a beluga with echolocation issues grows tiresome with repetition, a climactic scene centered on cuddly otters more than makes up for it, just as Dory's indefatigable optimism successfully blots out deeper fears of death and abandonment. Finding Dory could never completely measure up to Nemo, whose dazzling visuals and mythic contours made it an instant, enduring classic. (And, for the record, it gains nothing from being shown or seen in 3-D, so families are advised to save their money.) Still, in deciding not to stray far from the first film in plot or tone, it makes for a pleasant, familiar, cheerfully unassuming fish-in-her-water tale.