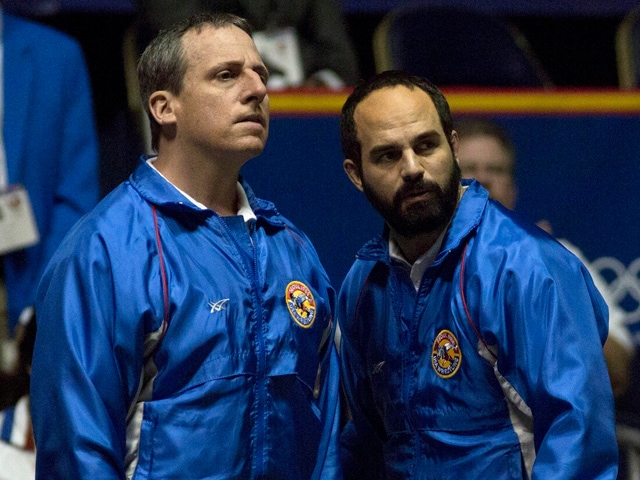 While the word Foxcatcher conjures up images of a person hunting foxes, the title is used as an apt metaphor. It is the name of the team that assimilated talented wrestlers.

Based on a real life incident that occurred between the mid-1980s to January 1996 in America, it gives a contemplative insight into a psychotic's murder drama that pivots on a revenge angle.

It is the story of the crazy multimillionaire and heir to the vast DuPont fortune, John du Pont (Steve Carell) and his twisted relationship with the Schultz brothers, Olympic gold medallists - Dave (Mark Ruffalo) and Mark (Channing Tatum).

Narrated in a linear manner, the film opens some time in 1987, where Mark is impassively and unenthusiastically delivering a motivational speech to a group of students. Following which, he goes for routine wrestling practice with his brother Dave.

While Dave leads a contented life with his family and career as a wrestling coach, Mark the more reticent of the two is a bottled up single introvert who is leading a mundane and subdued life after winning the gold medal at the 1984 Olympic Games in California.

Then one fine day out of the blue, in the garb of being a patriot and a philanthropist interested in wrestling, John DuPont invites Mark to his Foxcatcher training facility. He wants Mark to live and practice on the estate grounds and be a part of his "Team Foxcatcher", where he agrees to provide Mark financial support.

The offer is given to Dave too, which he offhandedly declines.

Mark, floored by John's proposal, enthusiastically accepts the offer and shifts bag and baggage to Pennsylvania.

During the course of his stay at Foxcatcher, John manipulates Mark to suit his idiosyncrasies.

While bonding over cocaine and wrestling, Mark becomes a willing slave to John. And it is during this phase that it becomes clear that du Pont is adamant to recruit Dave to train at Foxcatcher as well.

It's only when Mark is unable to convince Dave to join Team Foxcatcher that his relationship with John sours and gradually deteriorates.

Steve Carell is convincingly repulsive with his prosthetics, slimy demeanour that includes a clumsy gait and bizarre speech pattern. He portrays the eerie John Dupont perfectly. Channing Tatum is sincere in his depiction of Mark as a lost, child-like and obtuse wrestler and he is ably supported by Mark Ruffalo as his level-headed older brother who is kind, warm and approachable.

The screenplay churned out by screenwriters E Max Frye and Dan Futterman is extremely measured, sluggish and passive to a point. It dwells on building the complex characters and highlights the convoluted mentor-mentee relationships and the bond between the brothers effectively.

With minimalistic sound design and constrained camera movements, the film derives a realistic feel. Similarly there are no frills in the production department except for the lavish locations to signify the Du Pont estate. The only issue is while the film tries to create an enigmatic aura, the effect is broken by the jerky transitions of the scenes.

Overall, Director Bennett Miller, after generating the right balance for a tense build up crushes the impact with a rushed denouement. This leaves the viewers in a vacuum. If it were not for the ace actors and their performances, Foxcatcher would have been just another mediocre fare.