Gabbar Is Back Movie Review

Gabbar is back, and it isn't good news. 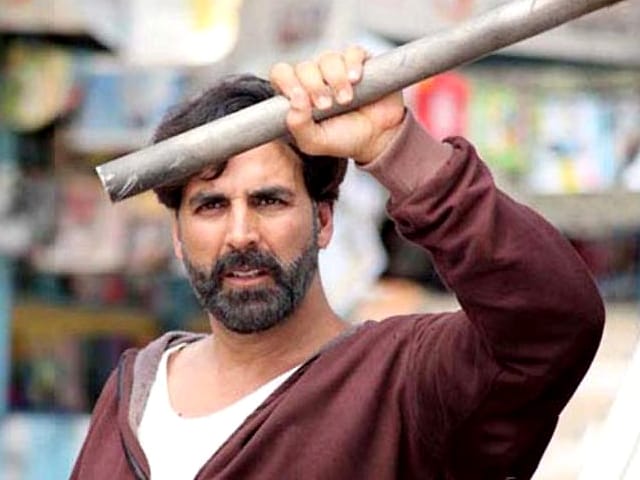 Gabbar is back, and it isn't good news.

Yes, let us not mince words. This Gabbar is a damp squib. Not only does he lack the pull and power of Hindi cinema's most memorable baddie, even the half-baked homilies that this holier-than-thou terminator of the corrupt mouths reeks of staleness.

But what did you expect from a film that, for its title, had to fall back on a household name from one of Hindi cinema's biggest hits, made all of 40 years ago?

Every bit of the Gabbar Is Back screenplay reflects the same spirit of lowbrow lethargy. The film marks a return to the bad habits of a past that much of Hindi cinema appears to have left behind for good.

Akshay Kumar is in virtually every single frame of the film, but no amount of the weight that he throws behind the trite narrative can yank it away from its mediocre moorings.

Gabbar Is Back, director Krish's first shot at a Hindi production, is a remake of a 2002 Tamil film made by AR Murugadoss, to whom the story is duly credited.

Despite the many tweaks that have been effected for the purpose of turning the tale pan-Indian - for one, the film is set in Maharashtra - and the unblemished cinematography by Nirav Shah, Gabbar Is Back simply cannot shrug off its dated feel.

To make matters worse, the characters are mechanically conceived and sketchily etched.

They merely go through the motions. None, not even the invincible hero, is allowed to spring out of the screen and rise above the patchiness of the final product.

Neither of them leaves any clear impression. But the fault does not lie with the actors playing the parts. They do their very best.

The motivations of the characters are inchoate, their actions seem arbitrary, and the screenplay provides no worthwhile insight into why they are what they are.

The hero's disillusionment with the system stems from a tragic personal experience revealed in a flashback featuring Kareena Kapoor Khan in a special appearance.

It is, however, difficult to fathom whether Gabbar's subsequent actions are a result of all-consuming anger or overpowering grief, so stoical and stone-faced is the protagonist.

Aditya is a college professor, but he does everything other than teach. Pretty much the same is true of Shruti Haasan's character. She is a lawyer whose life depends on stray pieces of information culled from Google.

We do not for once see the lady in a courtroom or in any other professional setting that might indicate what she does for a living. She floats in and out of the film without much apparent logic.

The only time she does something notable, the act has nothing to do with law - she plays midwife to a pregnant woman on the backseat of a car.

Gabbar Is Back is crammed from end to end with crushing clichés about corruption and its ugly ramifications.

The system, the hero intones, is like a baby's diaper - thoda geeli, thoda dheeli (a little soggy, a little loose).

So he goes about fixing the leaks by kidnapping dishonest bureaucrats and summarily executing them.

The man has a fetish for lampposts. He uses them to hang the bribe-taking officials, with their files tied around their lifeless bodies.

The cops are at their wit's end despite spending days and nights in confabulations over samosas and red chutney.

Gabbar Is Back flits from one issue to another without settling on any one of them.

It touches upon the shenanigans of a swanky hospital, the woes of water-starved farmers, the depredations of the real estate mafia and, of course, the widespread malfeasance in the police force and the bureaucracy.

The film reminds the audience repeatedly that the protagonist is a villain only by name. By disposition, he is a hero committed to ridding the nation of corruption.

His means may be questionable, his mission isn't. So the audience is supposed to egg him on.

Unfortunately, quite apart from the disturbing fact that the film glorifies a dangerous brand of mobocracy, it delivers nothing at all that can arouse genuine excitement and empathy.

The hero of Gabbar Is Back teaches physics in an institution that is famously out of bounds for both law enforcers and law-breakers.

Aditya's students, present and past, constitute his army, and they whisk away tehsildars, district collectors and senior cops with the utmost ease.

The only 'combat' training that they need hinges on the five fundamental loads of physics: tension, compression, shear, bending and torsion.

A bunch of goons breaks into the campus and Aditya alias Gabbar, in the midst of an open-air lecture, grabs the opportunity to give his impressed pupils a live demo on how to put these physical forces to best use.

Clearly, nobody put the makers of this film through the paces. They might have then known how to make the best of their limited cinematic resources and craft something less mucky.

Watch Gabbar Is Back only if you are a diehard Akshay Kumar fan.