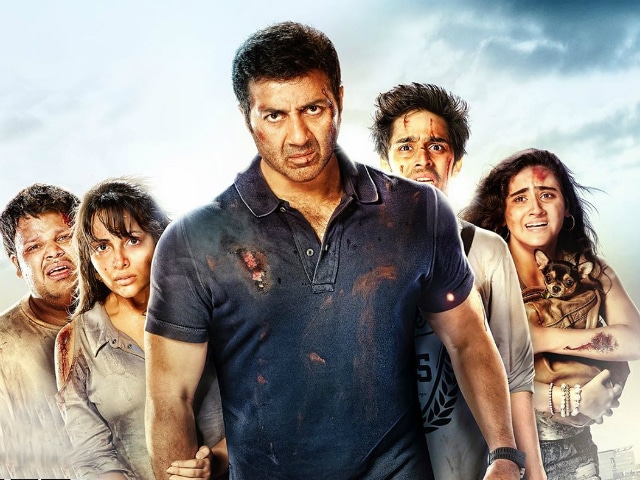 It is amply clear from the very outset that the quaintly antiquated Ghayal Once Again is unlikely to achieve its avowed goal - help Sunny Deol's dhaai kilo ka haath regain its lost box-office potency.

Several other Bollywood stars have since moved into the fists of fury space and the deadly Deol's dumbbells and decibels are no longer as saleable as they once were.

On his part, the actor, coming out of a longish hiatus, has left nothing to chance. He has produced, written and directed the film himself, thereby ensuring that he is in virtually every frame.

The former boxer is surrounded by a quartet of youngsters who swear by his messianic zeal.

Having completed his jail term, Ajay Mehra is now the editor of a crusading newspaper titled Satyakam.

One of the girls who joins his fight, the daughter of a high-flying, workaholic woman, blogs about the wages of flawed parenting. And that is among the film's many pet peeves.

Even the villain's wayward son is given the benefit of doubt by his own parents - and eventually even the hero - and absolved of personal culpability for turning out to be the obnoxious brat that he is.

What separates Ghayal Once Again from most other Bollywood franchises is that it is a genuine sequel to the 1990 super hit Ghayal and takes off from where the previous film left.

The script, co-written by Deol, harks back, via black and white flashes, to what happened all those years ago to Ajay, his wife Varsha (Meenakshi Seshadri), his accomplice in uniform Joe D'Souza (Om Puri, who is the only other actor who reprises his original role), and his nemesis Balwant Rai (Amrish Puri).

It is also indirectly reminiscent of at least two even older Hindi films.

One, the name of the paper that Ajay Mehra employs in his battle against the system comes from a 1969 Dharmendra starrer in which the actor played a fiercely honest young man negotiating a corrupt world.

No wonder Ghayal Once Again looks every inch like a film that has arrived at least 25 years too late even though it does reflect the undeniable fact that corruption is still a way of life in this country.

This time around, Ajay's enemies are a business tycoon Raj Bansal (Narendra Jha) and his spoilt offspring, Kabir (Abhilash Kumar).

The baddies hold total sway over the administration and the legal system. The home minister (Manoj Joshi) and a lawyer (Sachin Khedekar) dance to the Bansals' tune.

The media isn't spared either. It is the lecherous proprietor-editor of a rival paper (Harsh Chaya) who triggers the film's first big confrontation.

He sexually assaults a young female journalist and drives her to suicide.

Clearly, Sunny Deol is still stuck in the primordial days of Hindi cinema when the only recourse left for a rape victim was death.

Late in the second half, one crucial plot twist ratchets up the hero's rage to literally unmanageable heights - he hijacks a chopper to mount an attack on his adversary's high-rise abode.

That apart, Ghayal Once Again is a rather tame affair that banks on the interventions of Hollywood action coordinator Dan Bradley (credited as second unit director) to whip up some excitement.

The primarily result is a protracted chase sequence in which Ajay Mehra's truth-seeking 'missionaries' are pitted against Raj Bansal's murderous 'mercenaries'.

The dash begins on one side of the interval and continues well into the second half. The tussle is over a hard disk that has a recording of a murder committed by the hot-headed Bansal scion.

Ajay faces hell - a bullet grazes the side of his temple, a couple of cars hit him as he weaves his way through Mumbai's busy roads, and his own vehicle turns turtle after evading a thundering train - but he comes out unscathed.

Sunny Deol's acting takes the standard path. He hollers when he is angry, he scowls when he is flummoxed, and he breathes fire when he means business. It is a style that belongs to the Stone Age.

Soha Ali Khan, playing a psychiatrist treating the hero for his blackouts and meltdowns, is always at hand to remind him to pop the prescribed pills before he careens out of control.

But obviously, she does not have the power to extend any such favours to the audience. So watch Ghayal Once Again at your own risk and only if you can withstand the relentless onslaught it unleashes.