Gone Girl: No Job, No Money and Now, No Wife

The movie is meticulously staged and framed with sharp edits 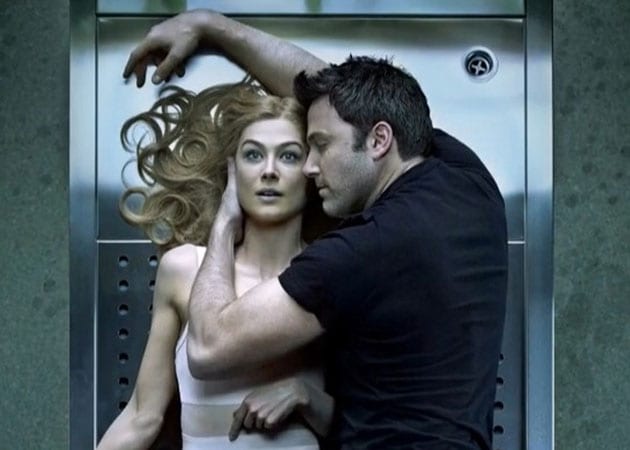 Gone Girl, the latest from that dark lord of cinema, David Fincher, opens with a man softly talking about his wife?s head. The image of his hand caressing a woman?s sleek blond hair in close-up indicates that it?s a lovely head, a lovely wife, too. Yet the violence of his words - he speaks of cracking her skull open and ?unspooling? her brain - wakens an unease that trembles throughout this domestic horror movie. Those familiar with Fincher?s work may wonder, perhaps with a shudder or a conspiratorial smile, whether this head will share the fate of another head belonging to another pretty wife, a gift that was boxed and delivered in one of the hellish circles girdling his shocker Seven.

Unspooling is such an inapt word - can brains, after all, be unspooled? - that it immediately puts dread in check. No matter how brutal the images generated by these words, surely there?s more in store than blunt-force entertainment. Well, yes and no, which is sometimes the case with Fincher. One of those filmmakers whose technical prowess can make the mediocrity of his material seem irrelevant (almost), Fincher is always the star of his work. His art can overwhelm characters and their stories to the point that they fade away, leaving you with meticulous staging and framing, and edits as sharp as blades. It?s no accident that the first time you fully see Nick Dunne (Ben Affleck), the man who had been discoursing so vividly about his wife?s head, he?s alone.

Gone Girl is set in the recessionary present in a small fictional Missouri town, North Carthage. Around the time you meet Nick, Fincher folds in some typical snapshots of desperate Anytown, U.S.A.: empty shops, vacant streets and homeless people tramping into the void. Nick and his wife, Amy (Rosamund Pike), aren?t headed for Brokesville quite yet, but they?re clinging hard to the status quo. They?re leasing their big, ugly house, and their bank account is running on fumes. The screenwriter, Gillian Flynn, adapting her novel of the same title, was a television critic for Entertainment Weekly who was laid off, and her characters share the same hard-knock fate: Nick, some kind of magazine writer, lost his New York job, as did Amy, who wrote quizzes for women?s magazines. (Was that a job? A. Yes, B. No, C. I doubt it.)

Times are hard, kind of, for Nick and Amy, but, as you discover in a series of flashbacks, they moved to North Carthage only when Nick?s mother received a cancer diagnosis. She died, and shortly after, so did the bloom on the marriage, though how it fades depends on who?s confessing and complaining. In the book, the narrative duties are fairly evenly distributed between Nick and Amy, who recount alternating versions of their happy times and unhappily ever after, with him taking you through events as they happen in the first person, while her point of view comes into focus partly through her detailed diary entries. The movie more or less duplicates this he-says, she-writes pattern, although with a critical difference: Nick?s story doesn?t unfold wholly through his first-person account.

Fincher, for all his modern themes and bleeding-edge technologies, is a classicist, and in Gone Girl, he creates a sense of Nick?s subjectivity the usual way, mostly by placing the camera next to the character and deploying point-of-view shots that are seamlessly integrated with shots of, and generated by, other characters. Shortly after the movie opens, the plot fires up, as you watch Nick return home to find that Amy has gone missing. You see him pick up their cat and watch him fling open doors, roam the halls and discover a broken glass table. In other words, here you know what Nick knows, which, as it will turn out, isn?t much. Amy is gone, and as Nick, the police, the town, the news media and the country shift into progressively more hysterical crisis-and-circus mode, she stays gone.

Fincher?s compositions, camera work and cutting are, as always, superbly controlled. Working again with the cinematographer Jeff Cronenweth and the production designer Donald Graham Burt, he fashions an ever more haunted, haunting world that wavers so violently between ordinariness and aberration that, as in his other movies, the two soon blur. Nick may feel at home in North Carthage, but, from that first shot of him alone in front of his house - and from his first conversation with his sister, Margo (Carrie Coon), in which they trade insults about Amy - he comes across as alienated, lost. Fincher underlines that isolation by showing Nick both alone in the frame and in his house, where he?s at times dwarfed and almost swallowed up by its generic, oversize rooms.

Amy?s voice-overs disrupt the movie?s inaugural seriousness. In flashbacks introduced by her scribbling in her diary, she reveals that she?s the inspiration for a beloved and profitable book series about a girl, Amazing Amy, created by her psychologist parents, Rand and Marybeth (David Clennon and Lisa Banes). Like Hannibal Lecter (a psychiatrist), Amy?s parents have profited from messing around in other people?s heads. (Your parents plagiarized your childhood, Nick says with husbandly commiseration.) They?re cartoons, but then, so is Amy, whose narration Pike delivers in an affectedly hushed, conspiratorial voice that?s so arch that you can picture Amy?s lips curling at the edges. Fincher doesn?t show you her sneer; he doesn?t have to. It imbues every word she says, instantly casting her as an unreliable narrator.

Given that the first half of Gone Girl is structured as a mystery, this unreliability presents a problem because it throws everything Amy says into doubt. Along with Affleck?s supple, sympathetic performance, Amy?s voice-over tips the scales so far in Nick?s favor that it upends Flynn?s attempt to recreate the even-steven dynamic from her book. Then again, the movie is on Nick?s side from the start, making the case for him, from the way he services Amy sexually to the gentle way he treats their cat. He sometimes explodes, as when he throws a glass to the floor while talking to two cops, Boney (an excellent Kim Dickens) and Gilpin (a dryly funny Patrick Fugit). The Nick here, like so many noir heroes, is simply, too simply, a decent, deflated, ordinary sap with serious woman problems.

The same is true of this movie. At its strongest, Gone Girl plays like a queasily, at times gleefully, funny horror movie about a modern marriage, one that has disintegrated partly because of spiraling downward mobility and lost privilege. Yet, as sometimes happens in Fincher?s work, dread descends like winter shadows, darkening the movie?s tone and visuals until it?s snuffed out all the light, air and nuance. As Nick becomes mired in the search for Amy, she confides how romance gave way to marital dreariness, accusations, his mounting loathing, her growing fear. One minute, he was leaving empty takeout containers strewn about and playing video games; the next, she says, he was raising a hand to her and she was cowering in their bed. She has the victim thing down cold.

By the movie?s second half, you may wish that Amy would stay gone. Pike has some fine scenes in this section, notably with a pair of hilariously sly lowlifes, Greta and Jeff (Lola Kirke and Boyd Holbrook), who, taken with a pompous, wealthy fool (Neil Patrick Harris as Desi), suggest that the movie is about to go deeper, that it will surprise you or stir you or say something, anything, maybe by making good on its scene-setting images of empty American stores. That never happens, and instead, the movie just hums along like the precision machine it is, even after it shifts tones again and enters Grand Guignol territory, with a flashing knife, gushing blood and surveillance footage of a seemingly tortured, horrifically abused and screaming woman. It?s a ghastly vision, although not for the reasons this movie would like.