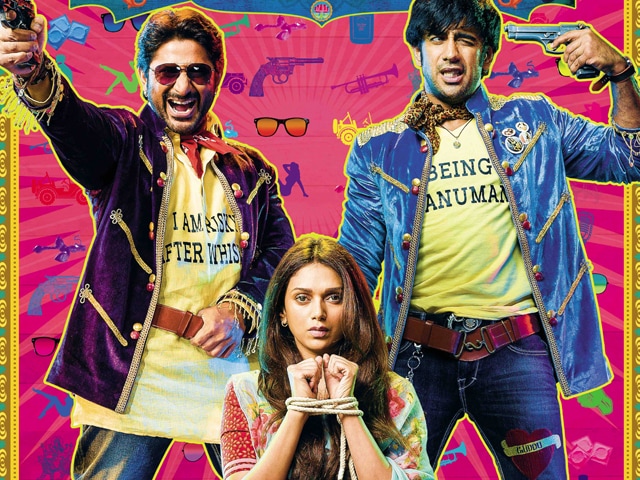 It's a timeworn formula. Take a pair of unflappable goofballs with a penchant for trouble, throw them into a series of life-threatening situations, and then watch them wriggle their way in and out of danger.

Despite the done-to-death feel inherent in that construct, it can yield an engaging tale when informed with the right dashes of humour, and when pressed to the service of a higher cause.

On both counts, Guddu Rangeela gets it bang-on. But the element of outright fun is somewhat subdued in this cops-khaps-and-crime action-comedy written and directed by Subhash Kapoor.

It is easy to why. Honour killing is the film's underlying theme and the vengeance motive is its principal plot propellant. Yet, the narrative is marked for the most part by freshness and dollops of earthy wit.

Guddu Rangeela turns a comedic eye on a serious social issue via the shenanigans of two overreaching small-time criminals.

Inspired by a real-life incident of honour killing but projected as a work of fiction, the film touches upon the deep fault lines that run through the Haryana badlands where both love and life hang by a precarious thread.

The opening sequence itself - the two eponymous protagonists present a rough and ready orchestra act at the home of a well-off local elder whose son has landed a visa to Kenya - drives home the film's off-kilter sensibility.

This delightfully irreverent spirit, which also spills over into the songs (music: Amit Trivedi; lyrics: Irshad Kamil), is sustained all through the first half and a bit of the second.

And then something snaps, and Guddu Rangeela sinks into a muddle of clichés that pave the way for a conventionally 'explosive' climax that does not quite look like an integral part of Kapoor's filmmaking style.

Guddu Rangeela, however, ticks so many of the essential boxes that one is willing to ignore the ones that it does not.

For one, its conmen-protagonists aren't swaggering louts peddling mindless machismo. Yes, they do swear by their innate survival instincts, but they do not sport this attribute like some badge of virility.

It is only life's hard knocks that have taught them to be on their toes at the best of times.

Guddu (Amit Sadh) and Rangeela (Arshad Warsi) are orchestra singers. They snoop around wealthy households in the area, gather information about the riches hidden in their lockers, tip off local gangsters and get paid for their services.

That is the only way they can get by without getting their own hands dirty in a crime-prone terrain where you are only as good as your last heist.

Not only do Guddu and Rangeela have to worry about a vicious goon and his trigger-happy henchmen, they also have the corrupt head of the local police outpost, inspector Ajay Singh (Amit Sial), snapping at their heels.

While the younger and more impulsive Guddu wants to pull off a few burglaries himself and make a killing, the worldly wise Rangeela will have none of it. Murders, robberies and kidnappings are not our scene, he asserts.

Guddu Rangeela also has two strong female characters, both gutsy survivors who are courageous enough to fight to the bitter end for their right to live.

Like Guddu and Rangeela, Baby (Aditi Rao Hydari) and Babli (Shriswara) have back stories that they cannot live down.

The quartet, brought together by a slippery ransom-seeker Bangali (Dibyendu Bhattacharya), is compelled to make common cause against the oppressive Billu Pahalwan (Ronit Roy).

In comparison with the riveting first half that is enlivened by quick twists and turns, the Guddu Rangeela denouement is a bit of a mess.

There might also be reason to quibble about Guddu's propensity of to crack jokes about unmentionable body parts.

But, then, this isn't a walk in the park and polite conversation is the last thing on the protagonists' minds.

The film is bolstered by a slew of wonderful character actors who deliver outstanding performances. Each one of them has his or her moments and they grab every opportunity with both hands.

Ronit Roy, who has the flashiest and meatiest role, towers over the others with the gruff and grumpy act that has become his stock in trade.

Arshad Warsi underplays his part but brings just enough of his natural flair to the job not to be crowded out of the frame.

Amit Sadh as the cherubic and chirpy Guddu is perfectly cast.

Shriswara, who has no more than one and a half scenes, including one in which her character takes on a khap panchayat that has just sentenced her to death, makes a very strong impression.

Aditi Rao Hydari, whose presence in the film is more than just decorative, looks just a tad lost in this milieu.

The supporting cast, led by Dibyendu Bhattacharya, is also on the top of their game.

One actor who steals just about every scene that he is in is the grossly underrated Rajeev Gupta, who plays bumbling Haryanvi cop Gulaab Singh, with extraordinary aplomb.

A lighthearted film about a deadly serious subject could have easily gone horribly wrong. Guddu Rangeela doesn't. It is lively, droll and occasionally thought-provoking.