There is no dearth of gloss in Happy New Year, but everything else in the film, including the content and its treatment, are allowed to go for a toss. 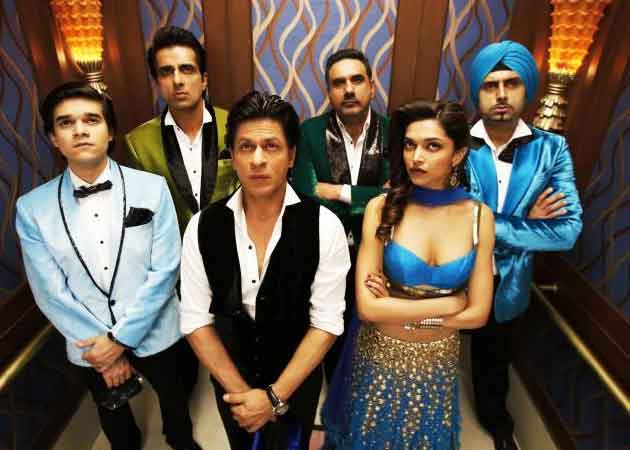 Unabashedly bad movies that mop up obscenely big bucks are director Farah Khan's forte. She was however third time unlucky with Tees Maar Khan. It was put down by many to the fact that the film did not have her proven good luck charm, SRK, on board.

So for her fourth directorial outing, the choreographer has brought back her Main Hoon Na and Om Shanti Om star, complete with gym-toned abs, a host of dog-eared tricks and a familiar set of talismanic mannerisms, to foist more of the same on the audience.

Is the result any better? Nope. No matter how much money the film eventually collects at the box office, Happy New Year, for all its visual opulence, has nothing new to offer nor is it a particularly happy narrative concoction. It has 'stale' written all over it.

This is by-the-numbers filmmaking of the worst kind and it yields a bloated, overlong thriller that will probably be worth its three-hour runtime only for those among diehard Shah Rukh Khan fans who believe that cinema need not be anything more than snazzily mounted naach-gaana.

Watching the Farah-SRK combo at work here is like being treated to an oft-seen circus performance. You know what is coming next, yet you still pay attention to every move in the hope that a surprise might be round the corner. But it never comes.

Produced by the superstar's own banner, Happy New Year uses excess as its primary means of communication. Overkill is the only art that the director seems to be adept at.
She pulls too many rabbits out of the hat but she clearly does not possess the control and sharpness to keep them from haring off in the wrong directions and not returning in any shape to be counted.

In a nutshell, Happy New Year is a predictable revenge drama, a trashy musical and a lowbrow heist film laced with a surfeit of song and dance routines.

After a point, its unending, meaningless exuberance and over-indulgence gets a little too tiresome.

Aggravating matters is the 'invincible Indiawale' angle that the director introduces into the plot. Not only is it unsustainably laboured, it also drags the already daft film down into the pits of complete inanity.

The male protagonist Charlie (Shahrukh Khan) trains his guns on Charan Grover (Jackie Shroff), the guy who framed his father and caused his death.

Charlie puts together a ragtag team to filch a diamond that is to be stored in a high-security safe built by the bad guy. But to be able to do so they must take part in a dance contest.

The crooks and conmen - played by Boman Irani, Abhishek Bachchan, Sonu Sood and Vivaan Shah - are good at thievery and skullduggery but have little talent for dance.
So bar dancer Mohini (Deepika Padukone) is roped in to get the guys ready for the battle ahead.

Among all the illogicalities that the film resorts to, none is more ridiculous than the "world dance competition" that a bunch of "losers" uses as a cover for an attempt at a daring robbery of a glittering stone.

The aforementioned competition constitutes the spine of the film and it is very weak and spindly indeed. It just cannot bear the weight of constant overload.

Being a Farah Khan film, Happy New Year also tries to be funny. The actors do all they can to help the director achieve that end by going overboard with their merry hamming. It isn't a pretty sight.

It is obvious that huge amounts of money have been sunk into the making of Happy New Year. It is apparent at the same time that the makers have been exceedingly stingy in the matter of putting some thought into the glitzy effort.

It is all very well for an ageing superstar to go all out to prove that he still possesses the magic of yore, but when the past hangs heavy over the proceedings it is a sure sign that the law of diminishing returns is catching up fast.

Deepika Padukone, given an atrocious accent inspired no doubt by her Chennai Express act, is the eye-candy who has been roped in to provide the feminine counter-balance to the generous male skin show on the screen.

There is no dearth of gloss in Happy New Year, but everything else in the film, including the content and its treatment, are allowed to go for a toss.