Hate would be a completely wasted emotion here. Do yourself a favour and just ignore Hate Story 3. 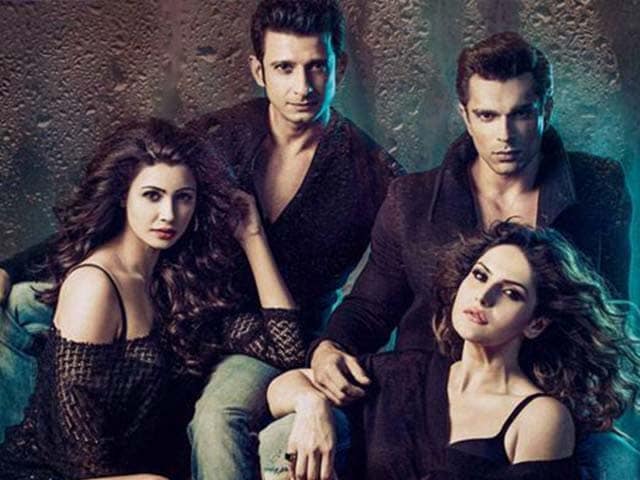 There is absolutely nothing to fall in love with in Hate Story 3. It is the tale of two very, very crabby men who hate each other with all their guts and hatch silly conspiracies.

The whys and wherefores of their actions and utterances are shrouded in mystery until the very end of the film, by which time it ceases to matter who wins and who loses.

The girls, apart from all the hip-wiggling, bosom-heaving and midriff-flashing that constitute standard fare in such cinematic piffle, play second fiddle.

The two women in the plot get pushed around like powerless pawns on a chessboard that has no queens, black or white.

Not that the two actresses saddled with this pair of poorly written roles would have fared any better had they been given meatier scenes to enact and more meaningful lines to speak.

Hate Story 3 expectedly wallows in prurient rubbernecking to inveigle its target audience, while pretending to explore the limits of fraternal ties and bonds of friendship.

It rides on a string of twists and turns that create neither tension nor menace. Worse, they do not even make sense.

Every now and then the film stops dead to make room for steamy sequences staged in swimming pools, smoky nightclubs and, of course, between the sheets, to the accompaniment of raunchy numbers.

While the formula employed in the first two films of the franchise is intact here, its impact simply isn?t the same.

Director Vishal Pandya?s attempts to turn up the heat are cringingly awkward.

The cat-and-mouse drama woven around these deadly scenes ? in one, a passionate kiss actually ends up killing the one at the receiving end of the smooch ? is intriguing only because it is laughably bizarre.

Bad acting all around compounded by inane writing makes matters infinitely worse.
One of the characters gets close to sizing up the film: ?Never underestimate your dushman. Har film mein dikhaya jaata hai. Shame on you.?

He isn?t allowed to go any further and the film continues merrily down the self-same path without a care in the world.

In the opening moments a successful businessman Aditya Diwan (Sharman Joshi) and his inexplicably morose wife, Siya (Zarine Khan), are seen presiding over the opening of a super specialty hospital named after the former?s deceased elder brother.

At the end of the ceremony, Siya trots out a sob-story in a television interview. She was pregnant with the dead brother?s baby, so the surviving sibling married her in order to give the child the family?s name.

Conveniently, Siya suffers a miscarriage. So, it is back to business as usual for everyone concerned.

In the next sequence, the audience meets a bright young lady, Kaaya Sharma (Daisy Shah), Aditya?s most trusted employee and the head of his company?s cold drinks division.

So that nobody suspects the film of being interested in anything but the objectification of its lead actresses, the camera hovers over her derriere as the lady walks up to the conference room, where she is told by her boss how valuable she is to the firm.

Enter a stinking rich man named Saurabh Singhania (Karan Singh Grover), who takes next to no time to come to the point. He offers a blank cheque to Aditya in return for one night of pleasure with his wife.

Beside himself with rage, Aditya vows to destroy Singhania. ?We shall see,? latter retorts without batting an eyelid. ?We shall,? says Aditya.

For the better part of the rest of Hate Story 3, the two men gun for each other using Kaaya Sharma as a secret weapon.

Occasionally, Singhania?s Man Friday makes a mysterious phone call and, in a conspiratorial tone, provides an update to somebody at the other end of the line.

?Game shuru ho gaya hai,? he dutifully reports after Singhania gets back at Aditya for rejecting his sleazy proposition.

In one scene, after his cola factory is forced shut when people begin to fall sick after drinking the beverage, Aditya?s wife says: ?You must be really worried.?

?Part of the job,? he replies coolly. He rounds off the conversation by renewing his threat to cut Singhania down to size.

A little later, one character captures the feelings of the audience: ?Just get me out of this goddam place!?

Yes, Hate Story 3 is that bad.

Hate would be a completely wasted emotion here. Do yourself a favour and just ignore Hate Story 3.