It has an altogether likable cast, all of whom appear quite game despite the lacking material. 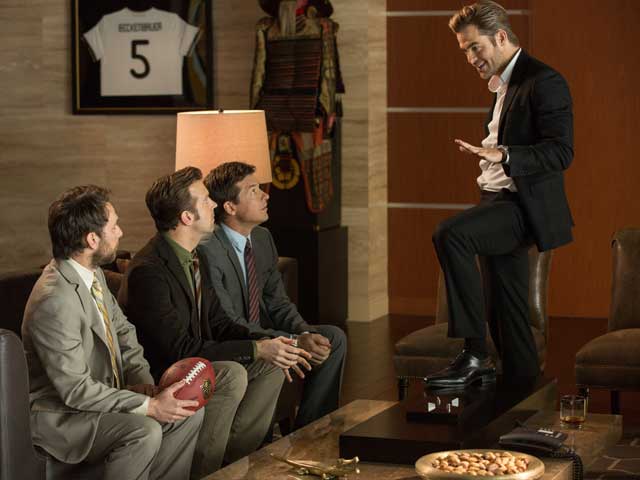 SPOILERS AHEAD
The characters of the modern workplace comedy, like the rest of us, don't know how to make a living anymore.

Having haplessly tried to murder their bosses in the first Horrible Bosses, Jason Bateman, Charlie Day and Jason Sudeikis return in Horrible Bosses 2 as hopeful inventors. "Let's bet on ourselves," they tell each other, making a clearly questionable wager. They go into business with a bath product dubbed Shower Buddy, and with their abysmal guest spot on a morning show promoting it, it's clear they may have backed the wrong horse.

It's become a familiar genre trope of recent years: The idealistic self-starter business that almost certainly wouldn't stand a chance in real life. Dwarfed by corporations or left behind by the digital economy, comedies are routinely littered with plucky upstarts, from Kristen Wiig's would-be baker in Bridesmaids to Vince Vaughn and Owen Wilson's middle-aged Google aspirants of The Internship.

While the first Horrible Bosses tried to tap into the widely held fantasy of killing the overloads of the office, its sequel mines the farce in being your own boss. The entrepreneurial efforts of the film's ever-yammering trio, of course, fail, and the film descends into a thinly sketched kidnapping plot that serves mainly to space its celebrity cameos.

Hoodwinked by a rich distributor (Christoph Waltz), the guys - Nick, Kurt and Dale - plan to kidnap the executive's playboy son (Chris Pine). The ill-conceived scheme returns them to their criminal adviser (Jamie Foxx, who the film could have used more of), Nick's now imprisoned former boss (Kevin Spacey) and Dale's old torturer dentist (Jennifer Aniston).
Horrible Bosses 2, directed and co-written by Sean Anders, is built on its hydra-headed leads who appear almost tethered together, crowding the frame like the Three Stooges. Bateman, Day and Sudeikis are each talented comic actors who have their riffing rhythm down, skillfully weaving and overlapping their idiotic antics.

But this gratuitous sequel fails most because their triangle offense, while smooth, isn't dynamic enough. With Bateman playing the straight man and Sudeikis' smiley, glib shtick wearing thin, the only source of laughs is the slapstick of Day - a reliably funny, high-pitched ball of anxiety. The It's Always Sunny in Philadelphia star is like an electrocuted chipmunk, his fearful eyes always darting.

So Horrible Bosses 2 goes for whatever cheap, vulgar gags it can collide into. Most unfortunate is the sex-crazed debasement of Aniston, who lights up the movie but suffers some of its lowest jokes. Really, it's an altogether likable cast, all of whom appear quite game despite the lacking material.

That the film skitters aimlessly away from the office is a wasted opportunity, too, since today's workplaces could use the levity. Someone should have given Horrible Bosses a real job.