In Creed, Rocky's Back, As a Mentor, Not a Fighter

Creed is a dandy piece of entertainment, soothingly old-fashioned and bracingly up-to-date 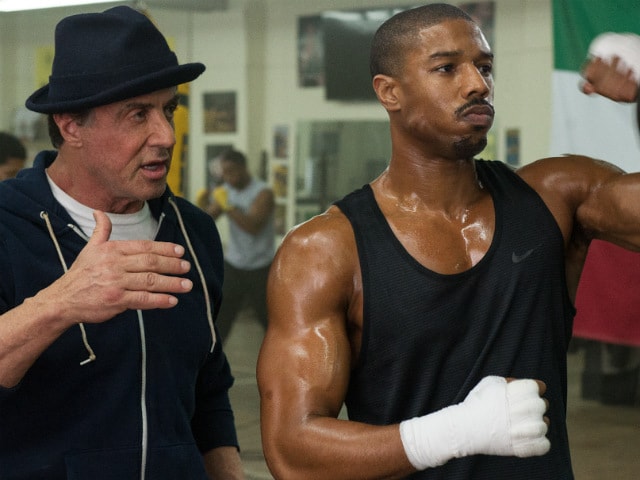 At a recent screening of Creed, as the familiar fanfare of Bill Conti's beloved Rocky score signaled the start of the final round of the big fight, the audience burst into spontaneous applause. This was no sneak-preview crowd, primed with free admission and popcorn, but a room full of critics and journalists armored in professional skepticism. A cynic might say that the cheering was a Pavlovian reflex set off by a piece of commercial entertainment in the hands of a skilled, manipulative director. This cynic, however, was too busy choking up and clapping to form the thought.

In 2015, whether by coincidence or by the mysterious movements of the dialectic, a bunch of semi-dormant franchises have come roaring back to pop-cultural life, enrolling legions of new fans and managing both to transcend and to exploit the nostalgia of Gen-X old-timers. There was Mad Max: Fury Road and then Jurassic World. The next Star Wars arrives in a few weeks. In the meantime we have Creed, which writes another chapter in the saga of Rocky Balboa and which is something that Italian Stallion's devotees have not seen in a long time, perhaps since the original Rocky way back in 1976: a terrific boxing movie.

And a great deal more besides. The six Rocky movies before Creed, to put it kindly, have had their ups and downs. From humble beginnings (and an improbable best picture Oscar, beating out All the President's Men, Network and Taxi Driver), the series rose in the 1980s to heights of grandiosity and preposterousness before stumbling into irrelevance. But don't call Creed a comeback. After the folly of "Rocky Balboa," the former champ is out of the ring for good. He's taken up the role, essential to the genre, of the gruff, grizzled trainer. And Sylvester Stallone, while happy to steal a scene every now and then, cedes the limelight to Michael B Jordan.

Jordan plays a talented light-heavyweight whose rapid ascent in the sport is fueled by an identity crisis. Even his name is in question. The love child of Apollo Creed, Rocky's erstwhile nemesis and eventual best friend, the young man is unsure whether to embrace or spurn the legacy of a father he never knew. He calls himself Adonis (or sometimes Donnie) Johnson, and his background is a complicated tangle of deprivation and privilege. He grew up in foster homes and juvenile detention centers before being adopted by Apollo's widow, Mary Anne (Phylicia Rashad), who raised him in Los Angeles opulence and kept him away from the boxing ring.

But of course you can't take the fight out of the boy. Although Adonis is unbeaten in a string of semi-clandestine bouts in Mexico, he is turned away from his father's former gym. No one in Los Angeles will go against Mary Anne's wishes and allow her adopted son to participate in the sport that killed her husband. What else can Adonis do? He travels to Philadelphia, where Rocky (Stallone, as if that needed saying) is running a restaurant and keeping a low profile. He's all done with boxing, but Adonis persuades him to give it one more try. They start training, and before long a shot at the title materializes, a classic mismatch with a British brawler named Ricky Conlan (Tony Bellew). Like Rocky himself almost 40 years earlier, Adonis is a designated tomato can for a superior fighter.

And like Rocky, Adonis falls for a lovely Philadelphian, a musician named Bianca (Tessa Thompson), who schools him in the local cuisine and the local slang. ("What's a jawn?" he asks her over cheese steaks.) She teases him for having a white uncle (Adonis' nickname for Rocky is Unk) and gets mad when she finds out that Adonis has been hiding the truth about his pedigree.

A boxing movie without cliches is like a political campaign without lies. Creed, directed by Ryan Coogler from a script he wrote with Aaron Covington, is self-aware without being cute about it. In the movie as in the world beyond it, Rocky is part of the cultural tapestry. Everyone in Philadelphia knows him. There's even a statue! But Coogler, a 29-year-old filmmaker whose debut was Fruitvale Station (also starring Jordan), looks at the Rocky story and the tradition of Hollywood pugilism through a fresh prism.

Rocky was the story of a Great White Hope, and also a fable for an era of racial backlash. Apollo Creed, played by Carl Weathers, was the heavy in that movie, and Rocky was the noble underdog. Later, they set aside their differences and faced a common Soviet enemy as the series turned its attention to Cold War geopolitics. By then, Apollo was the sidekick and the sacrificial friend, an injustice that "Creed," by its very title, seeks to redress.

The movie is also a Hollywood rarity: a boxing movie with a black hero. It is bizarre - though hardly surprising - that a sport dominated for decades by African-American and Latino athletes looks more like ice hockey on screen. And Creed, like Fruitvale Station, embeds its drama in the perils and pleasures of black life in America. Adonis is a complex character with a complex fate. He is at once a rich kid and a street kid, the proud carrier of an illustrious heritage and an invisible man.

His relationship with Rocky is complicated, too. The older fighter is a mentor and a father figure, to be sure, but he also needs someone to take care of him, especially when illness adds a melodramatic twist to the plot. Rocky has reconciled himself to loss. The people he loved - Paulie, Mickey, Creed and Adrian - are all gone.

It's too simple to say that Adonis teaches him to care again. One of the most surprising things about Creed is how gentle and easygoing it is, notwithstanding the effective brutality of the fight scenes. It is a pleasure to watch Stallone amble through a movie with nothing much to prove. He is at his best when he works comfortably within his limitations as an actor. Jordan's limitations, in contrast, have yet to be discovered. With every role, he seems to delight in the unfolding of his talent, and to pass his excitement along to the audience.

Which partly explains the applause that is likely to echo through multiplexes this Thanksgiving. Creed is a dandy piece of entertainment, soothingly old-fashioned and bracingly up-to-date. The punches fly, the music soars (hip-hop along with Ludwig Goransson's variations on the old Bill Conti brass) and the ground is prepared for "Creed II." We'll see how that goes. But for now it is sweet to have this lesson in the importance of fast footwork, brute power and brotherly love.