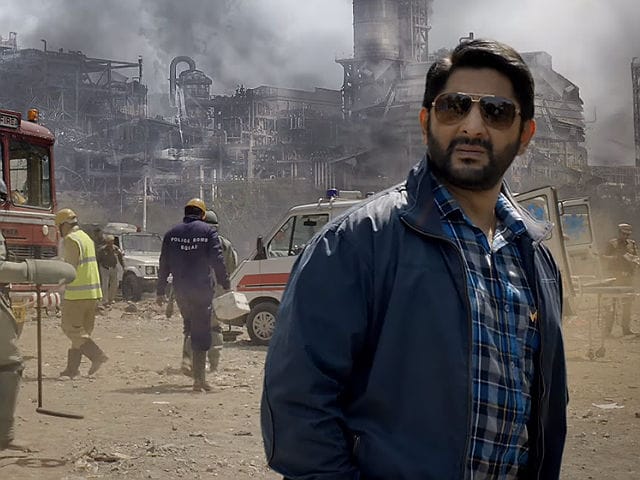 Debutante Aparnaa Singh's Irada is peppered liberally with terms like reverse boring, chemical contamination and groundwater pollution: not something we normally expect from a Bollywood thriller. These deadly phenomena have been gnawing at the entrails of India's haphazardly growing urban sprawls. They are central to Irada, a reality-inspired eco-thriller set in a Punjab town (Bathinda) where cancer is endemic. It is a small film on a big mission: the issue that it calls attention to is global in scope and its relevance goes beyond the limits of a single town, state or country. Deserving of wide attention and hearty applause for the concerns it articulates, Irada bears the imprimatur of a director who is not only acutely aware of the world around her but also conscious of the power of the medium to explore truths that are hiding in plain sight.

Aparnaa Singh vividly evokes the small-town ambience of the film's setting, with the four cooling towers of Bathinda's thermal power plant towering over a nondescript skyline.

They stand in the manner of silent sentinels watching over the town. Just as much, they reminders of the many environmental follies the town has weathered - and withered under.

Inevitably, the screenplay throws in the "cancer train" (it ferries the terminally ill and their relatives between Bathinda and Lalgarh) in order to convey the enormity of the crisis that has this part of Punjab in a vice-like grip.

But for all its strength of substance, this competently executed drama could have done with a little more grit in its treatment and some more gust in its sails.

The line separating a simply good film from an indisputably great one is often thin - Irada doesn't quite make the leap across the chasm.

Irada is a gripping enough tale somewhat undermined by its two facile villains - one represents the manipulative big corporations, the other the pliant political class.

The two evil figures - a haughty corporate tycoon (Sharad Kelkar) and a corrupt chief minister (Divya Dutta) - play their hands so brazenly that no room is left for any sort of nuanced, believable portraiture.

But no matter what Irada lacks, it is frequently pushed above the mundane by a magnificent pair of performances from the Ishqiya/Dedh Ishqiya duo of Naseeruddin Shah and Arshad Warsi.


Naseeruddin Shah in a still from Irada

Even when he is in the most nondescript of scenes and is delivering the blandest of lines, Warsi manages to add miraculous depth and resonance to them.

The more we watch him, the more we marvel at the ease and confidence that he brings to his craft. Warsi never seems to act. He doesn't need to.

The film mentions the long-term deleterious effect of the Green Revolution is mentioned in passing, but its plot hinges on a massive industrial waste treatment scam that has turned the water in Bathinda's pipelines and the blood in its citizens' veins toxic.

Two men - a much-decorated soldier-turned-writer (Naseeruddin) who believes in quick, 'one shot' remedies and a cynical NIA officer (Warsi) who is summoned by the CM to attempt a cover-up but turns rogue - have a stake in cleaning up the mess - the former for a very personal reason, the latter in pursuit of a professional mission.

In their war against the plant that pushes the town into an abyss of death, disease and devastation, the duo receives the active support of a scribe (Sagarika Ghatge) out to avenge the murder of her RTI activist-boyfriend (Nikhil Pandey).

It is easy to empathize with their crusade, but the film does not generate enough suspense and tension to make their investigation an edge-of-the-seat affair.

Watch the trailer of Irada:


Nor does the film shock the socks off the audience despite trotting out disturbing details about the sheer enormity of the problem that the "wheat bowl" of India faces today.

In the course of a mobile phone conversation, Warsi's sleuth advises his son not to watch films like Singham for "it takes you away from reality". But when push comes to shove, he accepts that it is time to "become Singham".

Mercifully, he does not resort to extreme methods a la Singham - a spy camera and a single slap is all he deploys in the climax - but Irada ends on a pat, preachy note, invoking Che Guevara, no less.

Be that as it may, Irada is a film that we must all watch. It scores because its intentions are commendable and its message hits home.