Everything about Jack Reacher: Never Go Backis so generic, it's basically the supermarket knockoff of another, better product - the Bourne movies, perhaps - minus the selling point of a discount 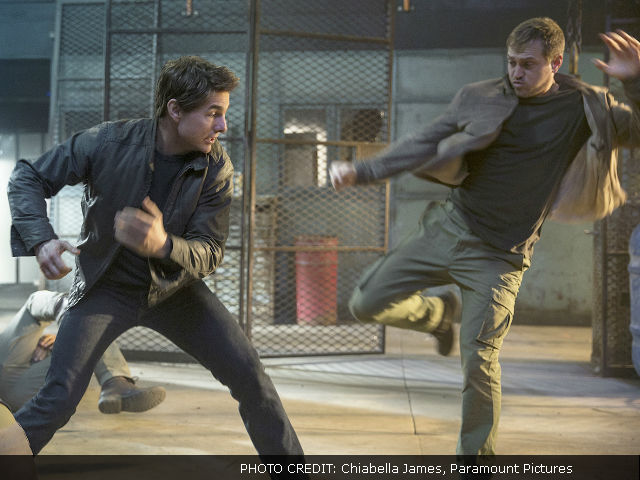 Everything about Jack Reacher: Never Go Backis so generic, it's basically the supermarket knockoff of another, better product - the Bourne movies, perhaps - minus the selling point of a discount.

Like the first installment in 2012, the sequel stars Tom Cruise as the titular loner, an ex-military police officer who hitchhikes from town to town serendipitously stumbling on corruption and crime, and righting wrongs - usually with his fists.

He's your garden-variety action hero, right down to the lack of personal attachments. The closest thing he has to a friend is a woman he has never met. Susan Turner (Cobie Smulders, doing her best with the material) is the major in charge of Reacher's old unit, and when he wants to turn in a baddie, he calls her. They strike up a long-distance flirtation, so he heads to Washington for a formal introduction, but when he gets there, he learns she's been arrested on bogus espionage charges. That's a big wrong to right; luckily, Reacher brought along his fists.

The movies are based on a series of books by British author Lee Child, who has been churning out roughly one a year since 1997. Some fans were aghast when the diminutive Cruise was first cast as Reacher, who's supposed to be a giant of a man, 6-foot-5, and an unstoppable physical force. (Maybe the Rock was busy filming another Furious installment?) Never Go Back, directed by Edward Zwick, makes the casting seem even more ridiculous. At 54, the actor isn't as spry as he used to be, which would be less obvious if he didn't spend most of the movie hustling from one getaway car to another.

After Reacher breaks Susan out of prison, the two embark on a quest to find out why she was arrested and who killed two of her direct reports in Afghanistan. The pair are simultaneously being hunted by the head of a shadowy government contractor, who sends droves of incompetent men after Reacher, only to have each one get trounced.

Naturally, there's one particularly nefarious adversary. Played by Patrick Heusinger, the unnamed hunter has the kind of vanilla good looks that would make him a perfect lead on a USA Network show. The fact that he never takes off his black leather gloves, probably purchased from an emporium for serial killers, is the kind of hint the movie continually doles out like a punch to the face. If seeing the man torture and beat someone to death doesn't make it clear enough, the gloves seal it: This is one scary dude.

The story is complicated by the sudden appearance of Sam (Danika Yarosh), a smart-alecky teenager who may or may not be Reacher's daughter. His paternal instincts kick in fast, a rather surprising turn for a guy with the emotional intelligence of a potato.

Of course, action movies don't have to be believable or poignant. They just have to get your adrenaline pumping. But the movie lacks inspiration in that department, too, owing to action sequences you've seen before, familiar music, and dialogue so predictable you could make a game out of guessing the next line.

Maybe it's too easy to end a review by drawing attention to the fact the movie is aptly titled Never Go Back. Then again, Jack Reacher doesn't deserve anything more inventive.

One star. Rated PG-13. Contains sequences of violence and action, some bloody images and language. 118 minutes.