Priyanka Chopra appears far too glossed-up for the role. She does her very best to lend the character the requisite gravitas 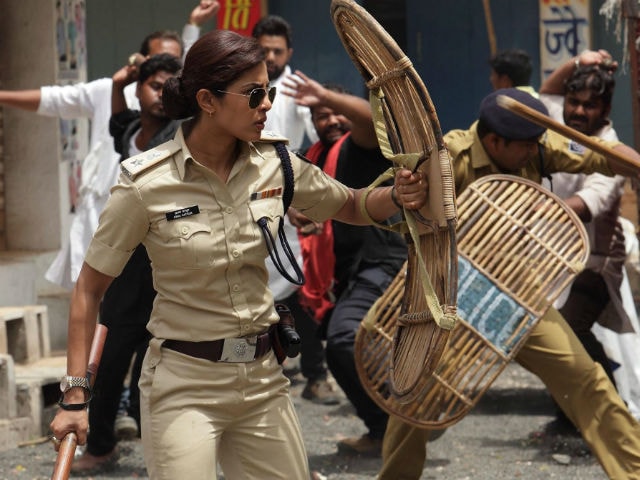 In his latest foray into India's dusty political badlands, director Prakash Jha parades an entire array of reprehensible goons out for their pound of flesh.

But the tough-cop heroine of Jai Gangaajal is up against more than just individual law-breakers.

Her ire has a larger context: it is directed at an entire system that is completely at the mercy of the high and mighty.

Jai Gangaajal has only tenuous links with the 2003 cop drama that it is meant to be a sequel to. Neither its characters nor its plot borrow anything at all from Gangaajal.

It does touch upon the question of mob violence and instant justice, but there are hangings instead of blindings here.

It also, in the process, addresses a whole lot of other issues: land rights, farmer suicides, ugly politics and police corruption.

For good measure, the plot has a PhD degree holder (Rahul Bhat in a special appearance) who has chucked up a high paying job in the US to throw his lot behind the poor landowners whose future is under grave threat from big industry.

Despite the topical themes it tackles and all the supercharged action that unfolds on the screen, Jai Gangaajal never really kicks into top gear.

There is little in the film's good-cops-bad-cops construct that has not been seen before in Hindi cinema, especially in Jha's own previous films.

Jai Gangaajal is a trite, if not entirely unexciting, drama in which the police force is always on the back foot and the land mafia and their political masters call the shots.

The tables turn just a touch when superintendent of police Abha Mathur takes charge of Bankipur district, the first female officer to do so.

The district is in the vice-like grip of a ruthless politician Babloo Pandey (Manav Kaul), who, with the help of a rogue cop Bhola Nath Singh (Prakash Jha) and a younger brother Dabloo Pandey (Ninad Kamat), rides roughshod over the local people.

Dabloo has his eyes set on the small plots of land owned by the town's poor inhabitants because he is in cahoots with an industrialist who plans to build a mega thermal power station in the area.

The no-nonsense SP puts her foot down. In the bloody confrontations that ensue, the body count is understandably high and many an innocent has to pay with his or her life.

Writer-director Prakash Jha, who also plays a meaty on-screen role, has nearly as much footage as the lead actress.

Bhola Nath Singh is a hopelessly compromised cop on the payroll of the four-time MLA of Bankipur.

SP Abha Mathur does everything in her power to rein him in, but he is a loose cannon whose recklessness repeatedly gets the better of him until one folly too many triggers a change of heart.

The moral and emotional conflicts that Jai Gangaajal is built around are rarely convincing. Worse, the solutions it offers are unacceptably pat.

The MLA-hoodlum who believes that women in uniform lose control of themselves meets his match in Abha Mathur but not before he is pushed to a corner by a mob baying for his blood.

The figure of Babloo Pandey, despite the impressively controlled manner in which it is interpreted by Manav Kaul, is never a believable politician.

He degenerates into a typical Bollywood villain, all fire and brimstone, ever ready to explode into action.

Priyanka Chopra, who is nearly always in neatly starched police attire and appears far too glossed-up for the role, does her very best to lend the character the requisite gravitas.

But even when she is at her most admirable, for her action-star persona is unable to propel the film out of its inertia.

Prakash Jha has a perpetual all-knowing smirk on his face in the early portions of the film - well, he is the director and he should know - but his performance gets infinitely better after Bhola Nath Singh is assailed by a wave of qualms in the second half.

Jai Gangaajal is likely to be a letdown for those who expect it to be a worthy follow-up to Gangaajal.

But if you go in without too many expectations, you might find parts of its fairly palatable.