Jupiter Ascending is a big, woozy, spacey fairy tale with a science-fiction exoskeleton and a core of pure mush 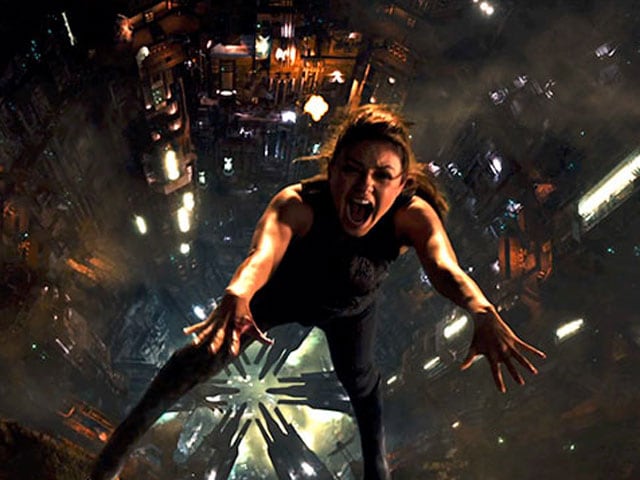 Jupiter Ascending, the latest from Lana and Andy Wachowski, is a big, woozy, spacey fairy tale with a science-fiction exoskeleton and a core of pure mush. With its nods to the original Star Trek and David Lynch?s proto-steampunk hallucination Dune, it seduces the eye with filigreed flourishes even as the mind reels from some of the mildewy storytelling.

Mila Kunis plays Jupiter Jones, an Earthling who turns out to be the reconstituted queen of the universe or some such, which apparently means that she needs to be repeatedly rescued. An uncomfortable-looking Channing Tatum plays her hybrid honey, Caine Wise, a man-wolf with pointy ears and, my, what big, bulging muscles.

The tale is at once baroque and corny. Kunis enters with a toilet brush in hand, doing the Cinderella thing with truckloads of pluck and eye makeup. In voice-over, she sketches how she got from her Russian mother?s belly to scrubbing commodes in Chicago, a woeful, dreary existence that takes a weird turn when some creepy ET-like critters pop into her life. She responds to this surprising close encounter not with screams or dazed smiles but with what feels like typical 21st-century insouciance: She takes a photo of them with her phone. Her apparent indifference seems bizarre at best. (There?s more going on because, well, in this movie there always is.) Yet, intentionally or not, it also telegraphs just how tough it is to impress an audience that?s inundated and perhaps terminally dulled by images.

For maximalists like the Wachowskis, the answer to the audience?s potential uninterest, or worse, the vaguest tremor of boredom, has always been more: more plot, more special effects, more violence, more coolness, more awesomeness - the better to dazzle or bludgeon you, my dear. In the one movie in which it didn?t feel as if they were simply piling on - The Matrix, as if there was any doubt - they found a story that dovetailed with their will to spectacle and ended up with a tour de force. It?s been fairly rough going for them ever since, whether they?ve taken on someone else?s excesses (as in their 2012 adaptation, with Tom Tykwer, of David Mitchell?s Cloud Atlas) or have ventured forth with their own original screenplay, as in the case of Jupiter Ascending.

Given their track record it?s no surprise that this movie is crammed with plot turns and eye-bulging visuals, including lavishly detailed sets and costumes. After the story really starts churning - there are good guys and bad, a spectrum of skin colors, a gallery?s worth of body art and some soft, ritualistic jabs against capitalism - Jupiter ends up way, way over the rainbow. There she meets overripe villains like Balem Abrasax, one of those decadent aristo-cats with a sneer on his lips and blood on his hands who once would have been played by a camping Jeremy Irons but is now played by a camping Eddie Redmayne. If you?re familiar with the fall of Rome you get the big picture more or less, but with spaceships.

The Wachowskis are routinely applauded for their ambitions, yet it?s startling how inattentive they can be to certain filmmaking fundamentals, like two shots. They?re good at making entire worlds, but, whether distracted by the big stuff or bored by the putatively small, they have a tough time making a conversation between two people come alive. So, once again, they give you loads of fun stuff to look at whether Jupiter is hanging onto Caine?s back as he skates across the sky or she?s wearing a fab, flowery headdress that would have made Elizabeth Taylor moan. Every square inch of this movie feels so obsessed over that it?s startling how rapidly the Wachowskis breeze through all their sets and setups. (It?s hard not to think that the original edit ran hours longer.)

At one point, Jupiter has to verify her status as the genetically reborn queen with some paperwork, an amusingly pedestrian errand that finds her briefly entering a bureaucratic spiral as she goes from office to office, including one run by a Dickensian gargoyle nestled in a lair festooned with shadows and old-fashioned machines. It?s a pleasantly decrepit, suggestive tableau because, as this extraterrestrial creature punches the keys on one machine and turns the crank on another, you get a sense of all the many histories poured into this science-fiction world. But before you can really take it all in, Jupiter is rushing toward the next plot twist.

Part Alice in weirdland, part imperiled Pauline, she periodically hitches a ride in the arms of Tatum?s wolf-man, Caine, and occasionally joins up with another he-man, Stinger Apini, played with relaxed appeal by Sean Bean.

Perhaps because Bean is a veteran of outsize entertainments like ?The Lord of the Rings,? he seems more comfortable inhabiting this fantasia than Tatum does. Then again, Bean doesn?t have to wear pointy ears. The ears are amusing but they?re almost all that?s memorable about the sketchily conceived Caine. Like Kunis, Tatum is a charismatic screen presence who often feels lost amid the clutter and chaos in ?Jupiter Ascending.? In another movie, these two stars might have been able to add life and layers to their characters; here, they just seem to be trying to keep up with the action. The performances are especially unconvincing in the quieter, intimate scenes because, while the Wachowskis know how to put on a big show and - like many other spectacle-minded filmmakers - excel at blowing their fantasies to smithereens, they too often fumble something more crucial and more difficult to pull off: ordinary, believable human emotions.