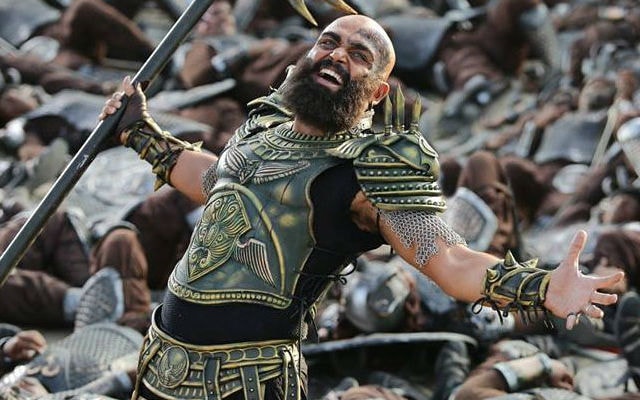 Kaashmora is about a fake godman who artificially simulates divine miracles and fraudulent occurrences which would have looked engaging if the special effects matched up with the protagonist's ingenuity. The graphics are so poor you wonder how the director thought he could get away with it.

Lamentably, Karthi, who was so endearingly street-wise in Telugu film Oopiri and earlier in Tamil film Madras, here struggles with a script that is completely lost in translation. The gags on bogus godliness run out of steam so fast, you fear the film will collapse in a heap of helpless laughter. And not because the characters mean to be funny.

Karthi just about manages to keep the proceedings afloat. His family members are played by actors who are funny not because they try so hard to amuse us, but because their efforts seem targeted at creating an atmosphere of satirical spookiness that is way beyond their capacity of comprehension. Nonetheless, one struggles with clumsy special effects and laboured acting for a good hour, before suddenly, director Gokul takes you into another time zone where we met warlord Raj Nayak.

Karthi portrays the blood-thirsty warrior with heaps of impassioned sincerity. He looks larger than life and ready for battlefront strife. Tragically, the Raj Nayak portion of the plot sticks out like a sore thumb. The grandeur is so lame you cringe for the team that thought it could pull off another Baahubali.

There are elements of a solid satire secreted in this mess of a film. Alas, none of shows in this scattered spluttering satire where medieval mayhem meets modern materialism and then follows an uneasy alliance of satire and spectacle that warranted a lot more care and attention.