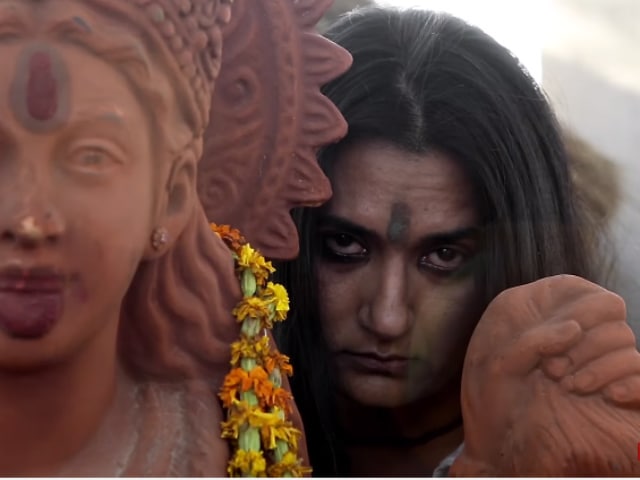 Kajarya is no sugar-coated pill designed for easy consumption. It stares unspeakable barbarity in the eye. The picture that emerges from its unblinking gaze isn't for the faint-hearted.

The film paints a grim, distressing social portrait of a north Indian village where female infanticide is still rampant.

Writer-director Madhureeta Anand uses minimalist means to hit out at the social mores and religious beliefs that perpetuate the slaying of newborn girls.

Ten million baby girls, the film tells the audience in conclusion, have been killed in this country since 1986 - three million of them in the last decade alone.

Also in the line of the film's fire is an exploitative media that routinely misses the wood for the trees in its cynical pursuit of sensational headlines.

No less responsible for this horrific state of affairs is the appalling apathy, if not outright collusion, of the law enforcement apparatus that is in place on the ground, represented in the film by a slothful police inspector who revels in passing the buck.

As it transpires, the film's titular character, a mercilessly exploited child widow turned infant-killer (Meenu Hooda), is herself a hapless victim of circumstances.

As part of a counterfeit religious ceremony staged periodically in the village, she is the one who, in an alcohol-induced stupor, snuffs out the lives of unwanted newborn girls.

Kajarya is led to believe that she is an agent of Goddess Kali and the only way she can atone for the death of the much older man she was yoked to as a 13-year-old is by sacrificing female infants.

Greenhorn journalist Meera Sharma (Ridhima Sud, seen earlier this year in Dil Dhadakne Do), arrives in the village on a routine assignment to report on an annual temple ritual.

A small-town girl striving to make her mark as a journalist in Delhi, she stumbles upon the sleepy hamlet's dark secret.

As the truth unfolds, the over-zealous newshound falls prey as much to her own ambition as to the diktats of her editorial bosses.

That sets Meera on a dangerous collision course with the unpredictable Kajarya.
On the condition that Meera will protect her identity, Kajarya makes a clean breast of her activities. But the scribe reneges on her promise.

Kajarya loses her anonymity and the law instantly comes down on her for she is a convenient scapegoat.

Her past comes to light in a heart-rending declaration of guilt that she makes while in police custody.

The interviewer is once again Meera. Once bitten yet she isn't twice shy. Kajarya has nothing more to lose. So she grabs the last chance she has to set the record straight.

Meera asks her: "Won't you apologize to the affected families?" Kajarya scoffs at the suggestion. The girls were handed over to her by their own families, she tells Meera.

This harrowing story, set in a Haryana village only miles away from the national capital region of Delhi, lays bare the ghastly reality of how millions of girls have gone "missing" from India's demographic.

Zeroing in on two diametrically dissimilar women - one an unwilling perpetrator caught in the pincers of hoary tradition and self-preservation, the other a wide-eyed urban ingenue discovering the horrors of life in her backyard - the director crafts a rounded representation.

In the vile universe that Madhureeta Anand creates, Meera is only marginally better off than Kajarya.

At the dining table in the home of her boyfriend Nikhil (Sumeet Vyas), conversation veers around to her just published article on female infanticide.

The boy's mother matter-of-factly expresses surprise at the killing of girls after they are born. She wonders why ultrasound tests aren't done.

Her suggestion is as sickening as anything else in Kajarya: infanticide is terrible, foeticide isn't.

These sledgehammer blows are accentuated by the fact that the grisly violence is kept off-screen.
The film takes recourse to suggestions of, rather than graphic descriptions of, the acts of killing.

Anand's screenplay adds other characters and layers to the tale. On one hand, Kajarya's long-time friend and lover Banwaari (Kuldeep Ruhil) is now her most ruthless exploiter.

On the other, the village hangman Shambhu (Shashi Bhushan) is her steadiest pillar of strength.
Kajarya bonds with Shambhu's motherless daughter, who with her unqualified and warm reciprocation helps the doomed woman attain a level of expiation.

Kajarya is a scarred woman. Her anger spills over every time she opens her mouth. She peppers her language with expletives.

But when she realizes that her fate is sealed, a strange calmness descends on her, along with a sense of what she has been doing all these years.

Meenu Hooda's restrained performance as Kajarya is remarkably effective. She turns the pivotal figure into an object of both repugnance and grudging sympathy.

Ridhima Sud, while paling somewhat in comparison, does her best to capture the moral and emotional dilemma of a callow and cocky girl faced with a life-altering encounter of an extreme kind.

Kajarya is a powerful and important film that finds vestiges of genuine humanity in an area of impenetrable darkness. But it offers no false hopes.

This film is for discerning audiences who have a stomach for the bitter truth.